Powerless took a couple of extra weeks off the air recently to presumably polish up scripts and try to tighten the latter portion of its first season. If that’s the case though, there wasn’t too much evidence of it in the disappointingly average, “I’ma Friend You” this week, which still has the show suffering through the frequent problems that have dragged down this debut season in too many places.

The core plot of the episode involves Emily trying to become better friends with Jackie, despite Jackie predictably preferring that she keep her distance. Emily’s clinginess eventually leads to her accidentally realizing that Jackie has a second job as an Uber driver however, which only makes her more insufferable with trying to be a better friend to Jackie, despite trying and failing to keep this a secret from Teddy, Ron and Wendy. I suppose if nothing else, the character interactions are at least more consistently reliable here, with the ensemble starting to become better defined in how they interact with each other and the world around them. That’s at least a small sign of progress for Powerless. 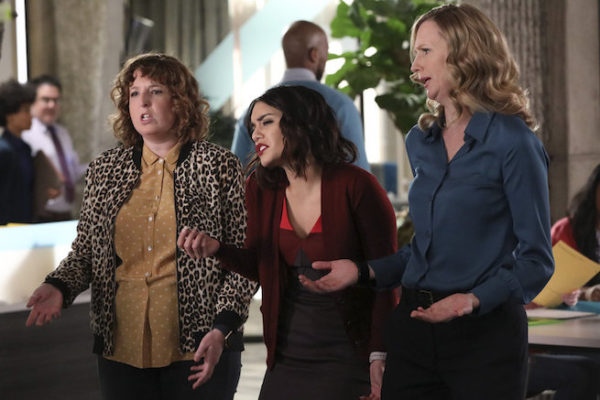 One of the first disappointments with this main story arc between Emily and Jackie though is the fact that nothing really comes of Jackie’s secret being spilled to the other three primary Wayne Security workers. They just hear the news and then immediately go back into their subplot with Van. What’s even the point of anyone at Wayne Security finding out that Jackie is having financial trouble then? It might have been a better idea to bring Van into this main plot, rather than constraining him to a subplot with the other workers, since Van definitely could have mined some decent humour out of Emily accidentally blabbing that Jackie needs money. The fact that this news never even reaches Van is definitely a big missed opportunity.

Instead, Van’s subplot has him disturbed that someone allegedly pooped in his private office bathroom without permission, and he is thus desperate to find the culprit. After some quick looking through the security tapes, and after the janitor brings him a magazine that was left in the area, Van naturally narrows it down to Teddy, Ron or Wendy, with all three being subject to increasingly ridiculous interrogation. As usual, Alan Tudyk is one of the funniest people on Powerless in this episode, and seeing Van go to such desperate lengths over something so trivial does have its moments of amusement. One of the funniest points of the episode comes when Wendy mistakes Van’s outlandish questioning as a sexual advance as well, and tries to unbutton her shirt, only to have Van frantically shout at her to leave it on. 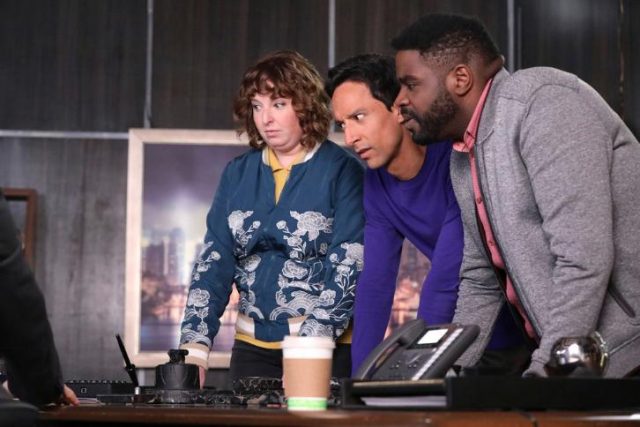 Still, even this subplot falters a bit, since there are no consequences for the pooping incident, especially when the evidence seems to suggest that Jackie simply entered the bathroom to squash a bee that was scaring Van. Van’s comical fear of bees is a bit juvenile, obviously, though that does fit with his character, I suppose. The ending gag that seems to suggest everyone uses Van’s bathroom in secret however, including the janitor that he keeps mistakenly calling by various ethnic names, is just confusing, rather than funny, especially when the janitor deletes the videos. What’s the joke there? That Van doesn’t notice anyone using his bathroom, and that the janitor somehow allows them to? Why did he notice in this particular instance then? The supposed punch line just didn’t end up being conveyed that effectively.

The resolution to the core Emily/Jackie subplot is similarly a bit disappointing. After Jackie claims that she needs money to give to her daughter for a school trip (she’s actually using it for night classes, and frankly, this lie feels like a non-sensical forced conflict), she blows off Emily repeatedly, only to eventually get her Uber car obliterated by Jack-O-Lantern, which somehow leaves her without a scratch, so she can be picked up by Emily at the hospital and cement their friendship. Oh yeah, Jack-O-Lantern is apparently running wild in Charm City more than ever as of this episode, since Crimson Fox just decided to leave… For… Reasons?

Even if she’s a C-list DC superhero, it seems kind of selfish for Crimson Fox to just pack up without explanation and leave Charm City to be ravaged by Jack-O-Lantern, even if he is likewise a C-list DC villain. Is the joke that the heroes of the DC Universe are just letting Jack-O-Lantern run wild because they can’t be bothered to deal with him? That’s kind of funny, but it is very inconsistent with the idealized philosophy behind the heroes of the DC Universe, and might have made a bit more sense in a Marvel sitcom, where the universe is more emotional and humanized. 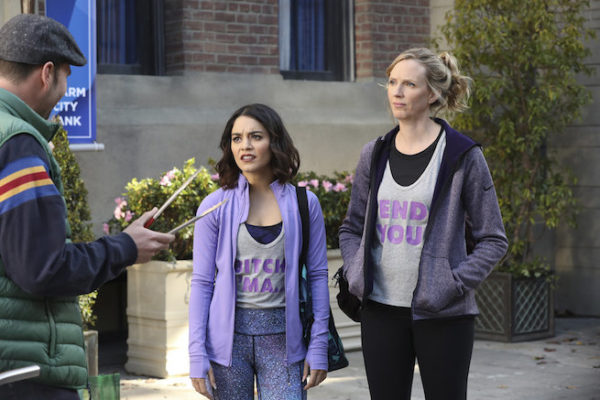 Actually, if you’re wondering what most any of these storylines have to do with the DC Universe, well, I’m wondering that myself. Powerless is once again far too disconnected from the DC license in this particular episode, with its storylines cobbling material from other sitcoms, rather than standing as a true addition to DC media. The token Jack-O-Lantern appearance basically seemed like it was only there because the writers suddenly realized that there weren’t nearly enough DC connections in this episode, so they hastily tossed one in at the end. Jackie could have just as easily crashed her car, and the result likely would have been the same. Remember the two strongest episodes of Powerless so far, specifically, “Sinking Day” and, “Emily Dates a Henchman”? What do those episodes have in common? Actual witty, funny and clever connections to the DC Universe as the basis for their jokes, that’s what!

A good friend of mine, who is one of the biggest DC fans I know, often complains to me that DC can be strangely afraid of fully capitalizing on their own characters when it comes to live-action media. When Powerless can barely muster any real connection to the DC-inspired humour it originally sold itself on once again, I have to wonder if he’s right. “I’ma Friend You” yet again drifted too far from the DC connections, and that’s before the mixed jokes and underwhelming storylines. I still haven’t given up on Powerless, because moments of hilarity, inspiration and creativity still pop up even in lesser episodes like this one, but the DC Universe has so many rich veins of comedy and satire that Powerless is still figuring out how to effectively and consistently tap, maybe because it’s too afraid to lean into being a cult sitcom, rather than a mainstream one. I guess we just have to come back next week and hope that the show has found its groove again.

Powerless 1.6: "I'ma Friend You" Review
Powerless slips back into being uneven and frustrating this week, especially with too few DC connections once again.
THE GOOD STUFF
THE NOT-SO-GOOD STUFF
2017-03-31
68%Overall Score
Reader Rating: (1 Vote)
72%