The Walking Dead has been limping along its mostly disappointing seventh season up to now, but finally, this week’s season finale can hopefully have all of that sluggishness lead to an at least decent confrontation between Alexandria and the Saviors. “The First Day of the Rest of Your Life” didn’t fully resolve Season Seven’s ongoing plot threads, some of which are left very conspicuously dangling to no doubt be revisited in Season Eight towards the end of this year, but it at least did represent a promising new phase in the ongoing battle against Negan, and at least provided some solid excitement that made for a fairly satisfactory way to end off a pretty weak season.

If you noticed that I explicitly stressed that the battle against Negan and the Saviors isn’t over by the end of the episode, and seems to only be escalating in Season Eight, then I can confirm the obvious here; Yes, Negan survives to fight another day (Jeffrey Dean Morgan already let slip in an interview several weeks ago that he’s still a series main in Season Eight as well), and isn’t ultimately killed off here, nor are any other noteworthy Saviors like Simon. Negan’s survival may not be surprising to fans of the source comics, since creator, Robert Kirkman has admitted that he originally planned to kill off Negan in the printed panels, but couldn’t do it since he likes the character too much, meaning that Negan is still alive and menacing, even in the further-along universe of the Walking Dead comics. It seems like the same is going to hold true of the TV series incarnation of Negan for the foreseeable future, and frankly, that’s fine. Negan being a genuine arch-nemesis to Rick and Alexandria works pretty well, and I am looking forward to seeing an even more savage and unpredictable Negan performance by Jeffrey Dean Morgan next season.

Despite Negan and his lieutenants surviving though, this season finale did provide a good sense of raised stakes and genuine tension throughout, as Rick and the Alexandrians have to decide whether or not to trust Dwight, who may give them a means of striking back against Negan. Surprisingly, it’s Daryl that primarily vouches for Dwight as a trustworthy ally (despite nearly stabbing him through the eye mere moments beforehand), and thus, a large-scale plan is enacted to place explosives around Negan’s convoy, blowing them all to hell, before strategic gunner emplacements finish off the rest of Negan’s forces. It’s a bold plan, and the Scavengers even come along for it, setting up their own gunners and assisting with the operation. There’s also an awkward moment where Jadis asks Michonne if she can have sex with Rick, which is only worth mentioning because of how awkward and random it is. Is that supposed to be a joke? Granted, it fits the socially off-putting character of Jadis, I’ll give it that.

We also spend quite a bit of time with Sasha, who has a lengthy flashback about her final moments speaking with Abraham during the events of the Season Six finale, before Alexandria encountered Negan for the first time, back when Maggie needed to be rushed to The Hilltop for medical attention. The first time we see this, it’s a nice little emotional moment for Sasha, and makes for a good excuse to reunite with Abraham one last time. The fact that the episode keeps stopping to revisit Sasha with an iPod reminiscing in this mysterious dark location is a bit much though.

This is yet more very obvious padding that’s only here because the season finale has, predictably and arbitrarily, been extended to a 90-minute length, including commercials. As usual for The Walking Dead’s extended episodes, this season finale really didn’t need to be 90 minutes long. It just amounts to more ad time, and a bunch of these obvious filler sequences with Sasha, which just re-tread the same old ground of, “Oh, isn’t it sad that Sasha couldn’t talk Abraham into staying in Alexandria?” We get it, The Walking Dead. You don’t need to keep interrupting the episode to hammer in the obvious! 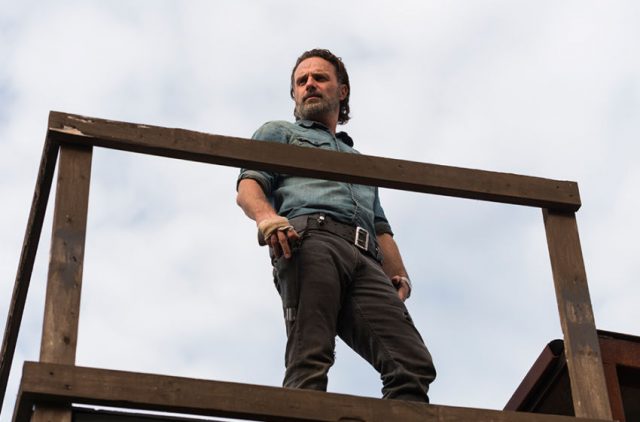 At the very least though, there was a pretty great payoff to Eugene’s poison pill, and Sasha’s reason for being in that mysterious dark location. After Negan thinks he’s successfully turned Sasha to his side, he transports her in a coffin to advocate for Alexandria to stand down, and, you can probably see where this is going by now. When Negan attempts to open the coffin to have Sasha address the group, he gets ambushed by a freshly re-animated Sasha, who took the pill and died in the coffin, hoping to assassinate Negan as a Walker when he opened it. It’s actually a pretty ingenious plan! It doesn’t work, mind you, but it’s still clever. It also effectively leaned into most genre TV enthusiasts already being fully aware that Sasha is doomed, since actress, Sonequa Martin-Green is now playing the lead in the upcoming Star Trek: Discovery series for CBS All-Access, and thus, she can’t be on The Walking Dead anymore. Sasha’s hasty disposal and burial at the end of the episode doesn’t ultimately have that much ceremony, but at least she went out like a badass, even if Negan not punishing Eugene at all, even for the belief that Sasha died by accident after running out of air, feels pretty unrealistic.

Now, you might be asking why an undead Sasha even got as far as being able to lunge out of a coffin and briefly keep Negan busy, when the Scavengers and their ordinance should have taken everyone out. Well, apparently, the Scavengers made another deal with the Saviors, and subsequently betray Rick’s group, keeping them at gunpoint, disabling the explosives, and eventually injuring several people in the brief scuffle towards the end of the episode. Oh, bullshit! Yeah, it’s pretty obvious that the writers wrote themselves into a corner and had to get out of it, since there’s no logical reason for Alexandria’s plan to fail, but even so, the Scavengers have been a crappy faction since their introduction. They don’t exist in the source comics, and that’s for good reason; They’re nothing but a transparent Season Seven plot device for when the show has no other way to move forward. Jadis manages to survive with a good amount of her people, after they’re eventually forced to beat a retreat, but personally, I wouldn’t shed any tears if these garbage-dwelling nuisances never appeared on the show again after this.

Speaking of Deus Ex Machina moments, Negan also makes a big show of preparing to bludgeon Carl to death with his bat, and forcing Rick to watch, only to have The Kingdom and The Hilltop arrive just in time to force the Saviors to retreat, thus sparing Carl the grisly fate of Abraham and Glenn. That’s lucky! Maggie already seems to be assuming pretty good leadership of The Hilltop, after Gregory just left for some unspecified location (it practically feels like we missed a scene, with how abruptly Gregory is just gone after alluding to packing a bag last week), and both she and Ezekiel manage to save Alexandria, with no one but nameless red shirts dying in the process. Sasha is the only major fatality among the show’s cast in the end, which may disappoint some, especially given the ridiculous odds that no main characters on any side perished in the massive gun fight that even had a freakin’ tiger running around and mauling people to death, but at least this was a fun sequence that was pretty exciting. Rosita and Michonne are injured, but aside from Sasha’s death, that’s about the worst that happens to Alexandria. Both women will obviously be back on their feet next season too.

Considering how badly the past couple of season finales for The Walking Dead have, frankly, sucked (Season Six’s finale is arguably one of the worst episodes in the entire series to date!), it was at least nice to have, “The First Day of the Rest of Your Life” be one of Season Seven’s better episodes, if not by leaps and bounds. The needless padding with Sasha yet again did a poor job of justifying the extended runtime, and the ultimate confrontation with Negan and the Saviors was ultimately too brief and inconsequential to have the impact that it should have had, though at least it promises a more exciting conflict for next season. The Scavengers continue to be a drag though, and Alexandria, The Kingdom and The Hilltop suffering no noteworthy losses besides Sasha is pretty damn unrealistic. The fact that Negan and the Saviors are still active and more dangerous than ever makes almost all of Season Seven feel pretty pointless too, and that’s a bummer. Still, with The Kingdom and The Hilltop finally fully invested in the fight now, hopefully Season Eight gives us the bloody war that we were initially promised for this season.

The Walking Dead 7.16: "The First Day of the Rest of Your Life" Review
The Walking Dead provided some good tension and a fun skirmish in its season finale this week, even if the big death and the current struggle against the Saviors don't amount to much in the end.
THE GOOD STUFF
THE NOT-SO-GOOD STUFF
2017-04-03
79%Overall Score
Reader Rating: (0 Votes)
0%