This week’s episode of Superstore put a heavy focus on Glenn’s family life, as a rather large amount of his foster children come into Cloud 9 so that they can be ready to take a surprise photo for Glenn’s still-unseen wife, Jerusha. The aptly-titled, “Glenn’s Kids” thus entirely revolved around plots that were built around the store employees interacting with a subset of Glenn’s many foster children, with two out of the three plots working well, while the remaining one felt a little more laboured.

Glenn himself, unfortunately, was stuck in the less successful storyline. This storyline involves Jonah hitting it off with one of Glenn’s daughters, the 25-year-old Kristen, and Glenn not wanting Jonah to date her. Because of this, Glenn finds himself unable to refuse Jonah, but nonetheless puts Amy up to sabotaging the budding romance. Yes, you can probably see where this is going. Rather than being a funny storyline that effectively stands on its own merits, this plot instead had to strain to move the Jonah/Amy romance forward in some small way, especially as the episode ends with a painfully on-the-nose indication that Amy continues to fall deeper for Jonah, especially as she seems him about to get together with someone else.

It’s not that this storyline never managed any good jokes, but it did constantly need to strain and creak to get the necessary story developments into place. The only reason Glenn seemed to lie to Jonah at all is because the story needed to be stretched out to fill the requisite length of a half-hour episode. There’s no reason why Glenn would ever suddenly be uncomfortable voicing his feelings like this, given some of his ridiculous crusades in the past. Likewise, Kristen somehow believing Amy when she claims that Jonah is on meth just makes both of them look like idiots. If Kristen is in law school, how is she stupid enough to swallow that obvious lie? Moreover, is that seriously the best fib that Amy can come up with to dissuade Kristen from dating Jonah?

Fortunately, the other two storylines worked a lot better, especially since both of these plots generally had stronger humour. One of these subplots involves Mateo trying to continue getting over Jeff, with Amy and Dina suggesting he throw himself into his work. Mateo doesn’t take kindly to this, though after initially being insulted by a handful of Glenn’s smaller foster kids, Mateo eventually realizes that he can trick them into doing his job for him. This was a bit uncharacteristically lazy for Mateo, but considering that he’s getting over a break-up, I suppose it fits that he wouldn’t be motivated to do his tasks around the store, especially since so much of Cloud 9 seems to remind him of Jeff.

This culminated in Mateo finally trying to confide in the kids about having to lose someone he was close with, which the kids obviously can’t fully understand, but they find their own ways to share their own issues in order to perk Mateo up. Mateo finding comfort in the kids was a genuinely sweet resolution, especially when it looked like he was going to have another extra unlikable storyline at first. I don’t know if Mateo will get over Jeff any time soon, but at least it was satisfying to see him find his resolve to work in the store again, even if just a little.

The remaining subplot had Cheyenne charged with looking after Glenn’s smallest foster child, Bobbi Sue, alongside Garrett, who, as usual, isn’t too concerned with the situation. When Cheyenne turns her back for one minute though, surprise, Bobbi Sue goes missing, then going on to serve as the punch line of Superstore’s subsequent establishing shot gags that show various weird things happening around Cloud 9, which the employees always seem to be oblivious to. Dina even joins in with this subplot, overjoyed at the chance to finally locate a missing child, something she has apparently (and weirdly) dreamed of for ages. Dina’s dark references to Bobbi Sue possibly being dead somewhere in the store were especially funny as well. 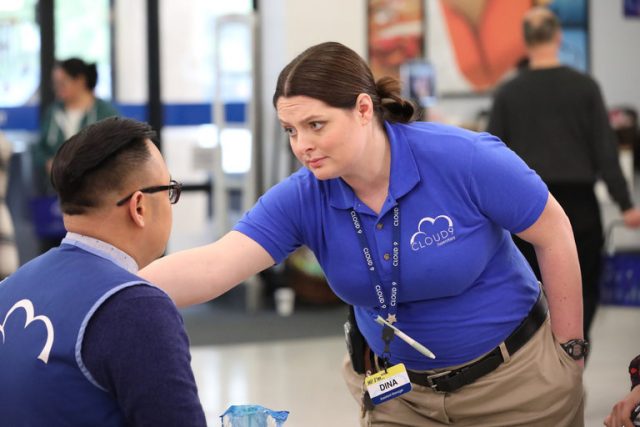 Watching three of the store’s most laughably ineffectual employees have to save the day in this genuine crisis made for lots of great laughs, and all things considered, this was probably the episode’s strongest storyline. Dina’s laughably pathetic ‘child trap’ being what catches Bobbi Sue was also a great punch line to end on, especially when Garrett encourages her not to take credit for finding the child, even though she keeps trying to. Fortunately, Glenn ends up being oblivious to the whole thing, so Cheyenne managed to look like a good parent, even if certainly not a perfect one. Her suggestion to offer her own child to Glenn in Bobbi Sue’s place and hope he doesn’t notice had to be one of the episode’s funniest jokes though!

This eccentric peek into Glenn’s family life made for another funny episode of Superstore overall, even if the latest attempt to push the inevitable Jonah/Amy romance forward felt heavy-handed and forced. Fortunately, the rest of the employees continued to bring the laughs pretty well in, “Glenn’s Kids” this week, and Glenn’s kids added a good amount of charm to what would otherwise be a less interesting episode as well. The Kristen/Glenn relationship already seems doomed from the start, but maybe it will be the merciful final step on the convoluted journey to Jonah and Amy finally giving things a shot. We all know they want to at this point.