Say what you will about Dead Rising 4, but the honest truth is that it was easily one of my favourite games of 2016. Sure, it was super easy (which has since been rectified with two post-launch difficulty additions), but it was a hell of a lot of fun, and the removal of the timer aided its cause. I know that a lot of others don’t share this opinion, but as per usual, it’s a case of different strokes for different folks.

More than four months have passed since Frank made his gory return to Willamette, and in that time multiple updates have addressed problems with, or enhanced the game with free or paid DLC, including some Valentine’s Day content. Now, it’s time to talk about Dead Rising 4‘s first major add-on, Frank Rising, which just recently released as part of the title’s Season Pass program.

Having been protested for what it is, Frank Rising is a paid add-on that continues the story by pushing past the ending of the main campaign. As such, it’s essentially asking you to pay extra in order to see the true ending, which some may consider to be blasphemy.

Things pick up with a bang, as Frank falls from his allies’ helicopter after being grabbed on to by an assortment of flesh-eating undead. Assumed a goner, he quickly becomes engulfed by the walking corpses, who devour a portion of his meat and leave him to turn.

Over the course of the next hour-and-a-half (or less, depending on how much you do and how fast you fly through the main missions), you’ll find yourself engaged in a quest to heal everyone’s favourite zombie-killing photojournalist. It won’t be easy, though, because the only chance of a presumed cure is hypothetical, and will require you to find and compile an assortment of random ingredients. Lots of fetch quests, to put it simply.

What a lot of longtime fans will appreciate about Frank Rising, though, is that, through its narrative, it marks the return of Dead Rising‘s famous timer. One that counts down from ninety minutes to zero, and brings with it the threat of explosive annihilation. You see, a series of bombs is about to be unleashed upon Willamette and its corpse infested mall, and those who fail to exit the city in time will go down with it. 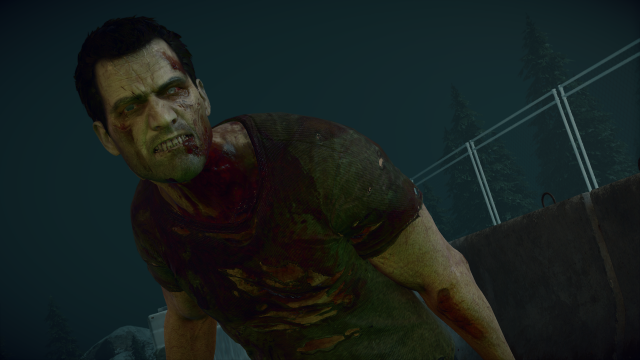 Frank, of course, does not want to be amongst those casualties, and is willing to do whatever it takes to avoid that fate.

What this all boils down to is more Dead Rising, albeit without its famous assortment of everyday items turned weaponry. Zombie Frank isn’t able to pick up food, weapons or anything like that, and must instead use his undead abilities (basic melee attacks, toxic spit, a stunning yell and the ability to pounce on enemies) to get the job done. That is, in addition to his hunger for brains, which is used as a way to heal oneself.

The gameplay is basic, the missions are simple (ie. go here, kill some enemies and grab what you need before moving on to the next store or building), and there’s little that stands out. Still, Frank Rising is mildly interesting and entertaining enough to be worth playing through. Those who didn’t like Dead Rising 4 much needn’t bother, though, because it’s doubtful that this mediocre expansion will change their minds or hook them to any great degree.

What’s kind of strange, though, is that there’s essentially more content than there is time. The achievements reward you for finding collectibles, like organ coolers, research notes, and princess wasps, but there’s hardly enough time to look for them all and complete the core quest line. Furthermore, there’s a hefty assortment of challenges (ie. feast in order to survive an always draining health bar, kill all enemies within a given time limit or get your hit counter to a certain level), but there’s barely enough time to seek them all out or complete each one, especially if you end up dying a few times.

The timer never stops, you see, even if you die during normal play. It just keeps on going.

Needless to say, like Dead Rising 3‘s DLC before it, Dead Rising 4‘s Frank Rising add-on is middling at best. It’s worth playing for those who care, but doesn’t stand out in any special way, nor is it anywhere close to as good as it could have been. The good news, though, is that its game breaking bug is no longer a bother, as it was recently eliminated by way of a patch.

This review is based on a copy of the game and its season pass that was provided to us.