UPDATE 3: In one final bit of shuffling, 20th Century Fox has confirmed speculation that the slight delay of, “Maze Runner: The Death Cure” to February 8th, 2018 has in turn delayed, “The Predator”, which had previously reserved that date. Instead, “The Predator” will now release on August 3rd, 2018.

UPDATE 2: The placement of the new, “X-Men” movie sequels appears to have motivated 20th Century Fox to shuffle around other major movie releases for this year and next year. The studio announced shortly after dating the new Marvel-licensed mutant flicks that, “Kingsman: The Golden Circle” is being moved up a week, and is now premiering on September 22nd of this year, pushing Universal’s formerly moved movie, “American Made” out of that date and back to September 29th. Fox has also moved up, “Murder on the Orient Express” to November 10th of this year, with a new Steven Spielberg movie (going by the working title of, “The Post”), opening in limited release on December 22nd of this year, before expanding to wide release on January 12th, 2018.

The January 12th, 2018 date is thus no longer being held by, “Maze Runner: The Death Cure”, which has been pushed back slightly to February 8th, 2018. With the new placement of, “Murder on the Orient Express”, action movie, “Red Sparrow” has also slipped into 2018, and will now release on March 2nd of next year. Finally, a few in-development Fox movies have received 2018 release dates, including, “The Kid Who Would Be King” being placed on September 28th, 2018, “Widows” being set for November 16th, 2018, and, “Bohemian Rhapsody” being scheduled for December 25th, 2018.

2017 is serving as a bit of a breather period for 20th Century Fox’s growing X-Men film franchise, with this past March’s hugely acclaimed and lucrative Logan being the only cinematic addition to Fox’s live-action X-Men universe for the entire year. That certainly won’t be the case in 2018 however, as Fox is cranking up production on their X-Men film franchise, with the studio announcing today that three of their in-development X-Men movie projects will officially be releasing next year, namely a new mainline series entry, and two spin-offs!

Premiering first will be spin-off, New Mutants, written and directed by Josh Boone of The Fault in Our Stars fame, which is set for release on April 13th, 2018. Said to be a fusion between the sensibilities of Stephen King and John Hughes, New Mutants will star an all-new squad of super-powered mutant do-gooders, which is rumoured to comprise familiar Marvel mutants, Wolfsbane, Magik, Cannonball, Sunspot, Mirage, and Warlock. The movie’s villain is rumoured to be Demon Bear. None of the characters have been officially cast at this point, though one of Boone’s The Fault in Our Stars alums, Nat Wolff is rumoured to be planned to portray Cannonball, while Maisie Williams and Anya Taylor-Joy are reportedly being considered for Wolfsbane and Magik, respectively. Interestingly, the movie would also mark Sunspot’s second live-action appearance in Fox’s X-Men film universe, since a separate incarnation of Sunspot portrayed by Adan Canto appeared in 2014’s X-Men: Days of Future Past.

The second new mutant flick from Fox in 2018 will, naturally, be Deadpool 2, which is grabbing prime Summer real estate on June 1st, 2018. Deadpool 2 will see the return of Ryan Reynolds as the titular Merc with a Mouth, with Brianna Hildebrand’s Negasonic Teenage Warhead, Stefan Kapicic’s Colossus, Leslie Uggams’ Blind Al and Karan Soni’s Dopinder also currently confirmed to be returning for the sequel, though interestingly, the status of Morena Baccarin’s Vanessa is up in the air for now. Director, Tim Miller ultimately exited the sequel due to creative differences, but has since been replaced by John Wick co-director, David Leitch. The sequel’s villain is currently unknown, but the movie will be introducing two new mutant foils for Deadpool, with the first being Zazie Beetz’s Domino, and the second being Josh Brolin’s Cable, both of which are meant to lead into a future ensemble movie, X-Force. 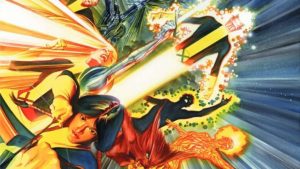 Finally, the third X-Men movie release for 2018 will be a new mainline installment for the franchise, now officially titled ‘Dark Phoenix‘, after previously being rumoured with the title of ‘X-Men: Supernova‘. Sophie Turner will be reprising her role as the young incarnation of Jean Grey from last year’s X-Men: Apocalypse, with the movie being slotted in for November 2nd, 2018. Not much else is currently known about the details of Dark Phoenix, but considering its title and the presence of Turner’s Jean Grey, it will obviously re-adapt the ‘Dark Phoenix Saga’ from Marvel Comics lore, which saw Jean bonded with a deadly cosmic entity that made her into one of the biggest threats to the existence of the Marvel Universe. Elements of this storyline were incorporated into 2006’s former X-Men movie trilogy climax, X-Men: The Last Stand, though that movie’s events have since been erased from canon by the timeline reset that occurred at the end of X-Men: Days of Future Past, essentially giving Dark Phoenix the chance to utilize a complete do-over on adapting the acclaimed Dark Phoenix storyline.

Even beyond these three movies, we’ll have yet more additions to Fox’s live-action X-Men universe on the small screen as well in 2018. This will come at the very least via the confirmed ten-episode second season of adult-oriented TV series, Legion, which is scheduled to air on FX in early 2018. Should the FOX network’s other planned X-Men spin-off series, Gifted also be picked up to series, its debut season, and possibly the start of a second season, will also be airing in 2018. Looks like we won’t be wanting for mutants in any live-action medium next year!

Fox has more X-Men movies known to be in development, which include the aforementioned ensemble movie, X-Force, along with an already-green-lit Deadpool 3. Another spin-off, Gambit, starring a new live-action incarnation of the titular card-slinging mutant to be portrayed by Channing Tatum, is also in the works, though is currently stuck in development hell, after being forced to abandon its previous October 2016 release window, and has no release date at this time.

Separately, Fox also continues to hoard the film rights to another Marvel property, Fantastic Four, which was supposed to see a movie sequel release this year, before it was cancelled in light of the critical and audience mauling, along with the dismally low box office intake, that 2015’s attempt at a reboot inspired. The status of Fox’s Fantastic Four film franchise remains unknown, though rumours continue to persist that the rights to Marvel’s First Family may at least partially be transferred back to Marvel soon, possibly as a condition for the Fox Entertainment Group’s securing of the deal for X-Men television spin-offs, Legion and Gifted.