Thanks to a rocking and incredibly entertaining big screen debut, Marvel’s Guardians of the Galaxy have rocketed up the comic giant’s depth charts. As such, it’s no surprise that a celluloid sequel is soon to hit our local silver screens, nor is it surprising that Telltale has used the ragtag group as subject matter for its latest adventure game.

Entitled Marvel’s Guardians of the Galaxy: The Telltale Series, this choice-heavy original effort is based on the group’s comics, though it also takes some cues from their movie(s). Through this, the aim is to appeal to all fans of the unique and comedic superhero quintet.

Featuring the familiar faces of Peter “Star-Lord” Quill, Drax the Destroyer, Gamora, Rocket Raccoon and everyone’s favourite tree-like creature, Groot, Telltale’s take on the Guardians has the potential to be great. However, as is always the case with such episodic games, it’ll be a little while before we’ll be able to see exactly how everything will play out.

At this point in time, all that’s available to us is the first episode. Dubbed, “Tangled Up in Blue,” it’s an exciting opening that does a good job of showcasing each hero’s individual personalities. The narrative, itself, is also on point, acting as a good set-up for what’s to come.

Things begin with a distress call from the Nova Corps, who summon the Guardians to a Kree planet where Titanian superhuman, Thanos, is causing trouble. There, the group faces off against the infamous super villain, who has come to the region in search of a mysterious artifact known as the Eternity Force. It’s something that can best be described as a black, double-sided cup with green veins coursing through it. 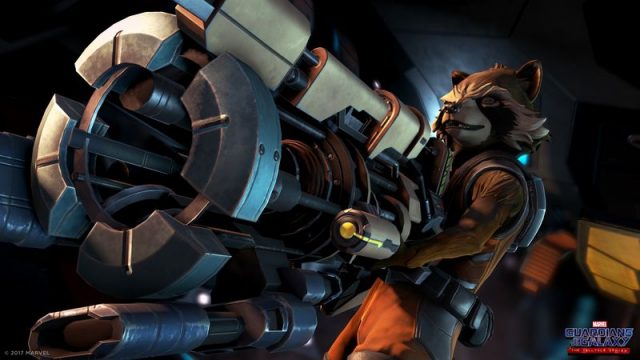 The two sides battle in epic fashion, before the Eternity Force ends up falling into our heroes’ hands. Then, things get both weird and dangerous.

You see, the strange relic that Thanos had his heart so set on has some rather mystifying abilities, and speaks to those who hold it. In doing so, it tries to lull them into a dream state, where it plays on their emotions. This is something that starts shortly after Star-Lord grabs it, causing him to go back in time. Saying much more would risk spoiling things, though, so I’d better stop here.

In fact, with the way that Telltale’s Guardians of the Galaxy is structured, it’s tough to really talk about the plot in Tangled Up in Blue without spoiling anything. Two major events occur almost right from the get-go, and it’s those that really propel things forward, while also serving as the basis for the episode’s most prominent choices. So, while I’d love to say more, I really can’t. What I will say, though, is that the events that occur set up what could end up being a very, very good adventure game, and the choices that you get to make are important from the start.

It’s also hard not to piss any of your allies off in the process. Rocket Raccoon is especially hard-headed this time around, and he expects things to go his way. You can side with him, but it may risk the group’s future safety. Or, you can choose to go with a much safer option, while having to worry about alienating one of your best pals and soldiers. Needless to say, no punches are held by such choices.

What’s best about this first episode, though, is that it does a very good job of capturing the Guardians that we fell in love with during the 2014 film. Although it’s said to be based more on the comics than anything else, it does involve the Kree, who look to be this plot-line’s biggest villains. Furthermore, certain character models — like Gamora — tend to look slightly different than film-goers will be used to. Gamora, herself, has been altered from the movie version, so as to include the well-known yellow spots that circle her eyes. 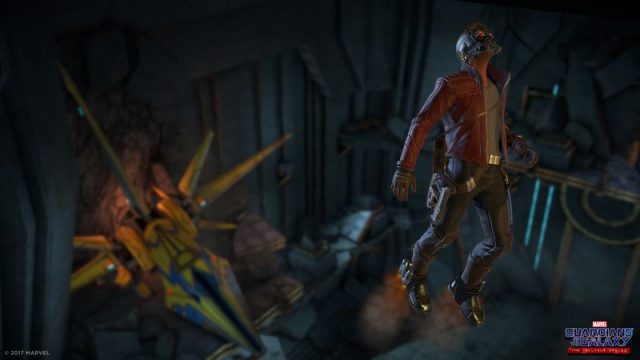 It should also be noted that, while all of the Guardians are playable during the battle against Thanos, it’s Peter Quill who serves as Tangled Up in Blue’s main playable character. Furthermore, everything that I’ve read online supports him being our main throughout this series, though we’ll have to wait and see if that changes with each subsequent episode. It does, however, seem as if he’s been set up as the central protagonist, especially with the Eternity Force having called to him.

Regardless, Tangled Up in Blue is an interesting, immersive and often exciting opening, which is well worth playing. From start to finish, it does a good job of both reintroducing and developing each of the individual Guardians, as well as setting up the new predicament that they find themselves in. There’s lots of intrigue, some absolutely hilarious dialogue, and even a time of celebration where hardheadedness and too much alcohol threaten to get in the way of a good time.

There’s layers to this story already, and I like that, especially given how narrative heavy Telltale’s games tend to be.

Of course, what we all love about the Guardians is the music and their references to yesteryear’s pop culture. Thankfully, all of that is included, through some great musical choices that fit in perfectly with what’s going on on-screen. The humour is also on-point, though this is just the first episode, meaning that more will be expected of the next four. This is just the beginning, after all. 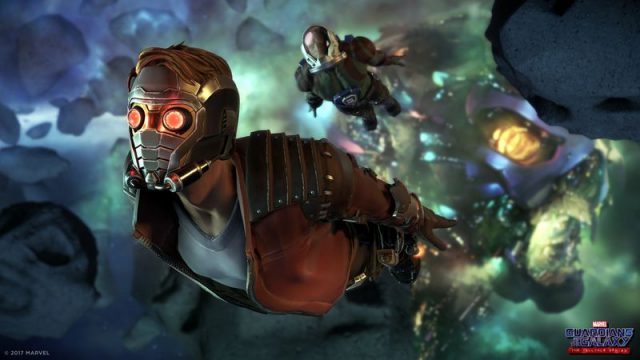 Outside of the music (and a great animated menu loop that is well worth watching through at least one), it’s the voice acting that truly stands out. Nolan North, especially, as he does a fantastic job of portraying a pitch-perfect version of Rocket Raccoon. I honestly don’t know if they could’ve gotten a better voice actor for that part, because his portrayal is almost perfect.

The others (Scott Porter, Emily O’Brien, Brandon Paul Eells and Adam Harrington) also do a very good job of breathing life into their famous avatars, despite Groot’s inability to speak more than one line. However, while that one piece of dialogue is repeated quite often, and likely will be throughout this series, it’s always uttered with different amounts of emotion, empathy and concern, with Rocket Raccoon offering translations of each one’s meaning.

The downside, though, is that this is still the same old, aging Telltale engine that we’ve become accustomed to. As such, you can expect some quirks and hiccups, mostly in the form of frame rate pauses. This is par for the course with Telltale games, however, and it’s not a huge deal. The characters, themselves, do look quite good in-game, though, as do the environments. Most noticeable is how colourful things are, with the Guardians’ models resembling those of a Disney Infinity game in some ways.

Overall, this debut episode of Marvel’s Guardians of the Galaxy: The Telltale Series is a bonafide (and quality) step in the right direction. Although it has a few lulls here and there, it does a very good job of setting up what’s to come, and offers a lot of intrigue in the process. It’s the characters, their dialogue and the heavy choices that they must make which really stand out, though, in addition to some great sound work.