Like Supergirl and The Flash before it, Arrow ended its month-long hiatus this week, to pick up with a freshly aware Star City that now knows full well who Prometheus is. Surprisingly though, not much came of that in, “Dangerous Liaisons”, which was instead more about the continued cost of rounding up one of Oliver’s most dangerous enemies, rather than the process of actually moving to apprehend the super-villain.

Thus, Prometheus sat out the entire episode, with Team Arrow and the SCPD turning up nothing in all of their continued efforts to arrest Chase. Even A.R.G.U.S. seems helpless to locate Prometheus when their help is enlisted, which gives Felicity all of the justification she needs to get back in bed with Helix. This big turn with Felicity served as the core plot of the episode, as Felicity’s shady dealings with Helix finally come to a dangerous head, and have big consequences for the formation of Team Arrow as a whole.

Granted, this episode didn’t quite soar to the same level as the superb, “Disbanded” from back in March, before Arrow took its month off, but it was still a solid and dramatically satisfying offering that pitted the team against Felicity, as Helix becomes the team’s latest enemy. Helix has promised Felicity the means to locate Prometheus where no one else can, but it involves breaking out a dangerous super-hacker from the confines of A.R.G.U.S. custody, on an illegal black site that’s situated just outside of Star City.

Naturally, Diggle isn’t too happy to learn the news of Lyla keeping an illegal prisoner without representation or trial, with Lyla forced to defend her actions in the name of national security. Diggle points out that this makes Lyla the same as Amanda Waller, an accusation that Lyla resents, but it is a truly justifiable one. It seemed like Lyla was more or less avoiding the same dark compromises that Waller had to make earlier in the series, but perhaps that was never true. The fresh tension between Diggle and Lyla to this effect is certainly interesting as well, even if it was kind of irritating that Diggle is once again acting like he no longer wants to be married to Lyla. Seriously? They already went down that route. I understand that Diggle would have a hard time with his wife’s compromise, but surely, he’s smart enough to understand that rehashing an old, tired fight that merely threatens their marriage isn’t going to solve anything.

Fortunately, all of the material that had Team Arrow working to stop Helix, now with Felicity within their ranks, was all great stuff. Helix tricking the team into guarding the wrong site was pretty bold, really speaking to how integral Felicity is to the team’s operation, even with Curtis still on Oliver’s side. What was all the better is how Oliver’s team had to stop Helix with no casualties on either side, after Felicity’s Helix pal casually murders an A.R.G.U.S. agent with a hacked elevator (albeit by accident), and even as Helix in general wouldn’t play by the same rules. Felicity even defends her Helix friends from Oliver as well, allowing them to get away with their prized hacker, so that the team can finally get their hands on tech that can lead to Prometheus.

All around, the Machiavellian themes of the episode were fantastic, as both Oliver and Diggle have to try and re-evaluate where the line is, as the two women closest to them seem to flagrantly cross it in the name of justice and security. Another slight sticking point in an otherwise good storyline though is that Felicity is repaid for her efforts by being iced out of Helix, which just feels too easily wrapped up at this point, though a final twist may explain just who Helix is truly affiliated with. Once Felicity loads up the tech with Oliver, they’re shocked to see that Prometheus is right there in the Arrow Cave!… Or, not exactly. Instead, the rigged tech appears to explode with an EMP, leaving the lair in smoke as the episode ends! Does this mean that Oliver and Felicity are trapped? The events of next week’s episode sure seem to convey that likelihood pretty blatantly, with the rest of the team cut off from them. 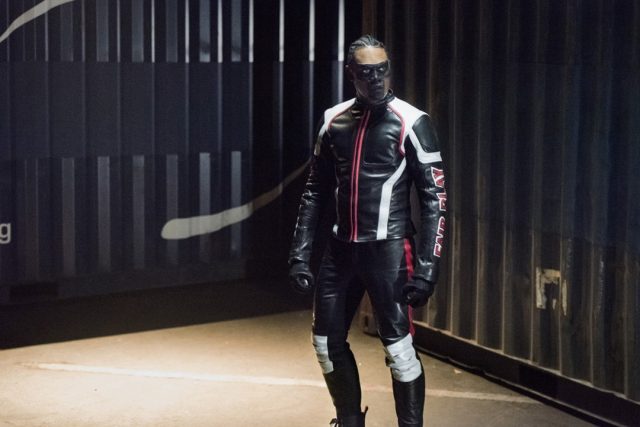 If you’re wondering about the flashbacks this week as well, then I may potentially have some surprising news; There aren’t any! Yes, the episode completely shed flashbacks in this case, and frankly, the story pacing really benefited from it. The flashbacks have served less and less purpose since the end of Season Two, and Arrow seems to be better off without them now. Instead, the episode contained a subplot revolving around Rene, as Lance tries to talk him into seeing his daughter again. Rene is refusing, on account of his drunken grief leading to his daughter being injured in the past, but Lance presses on anyway, eventually allowing Rene to reunite with his little girl, despite his anxieties. This storyline basically just filled in the gaps whenever the plot wasn’t being dominated by Felicity’s temporary defection to Helix, but it was pretty well done, especially in how well it capitalized on Lance losing Laurel, and using that grief to help Rene appreciate the value of seeing his daughter again.

“Dangerous Liaisons” delivered lots of potent themes about the line of justice, while also allowing Felicity to become the dark, misguided soul this time, rather than Oliver. Felicity knows that Helix can’t be trusted, and that she shouldn’t be helping them, but doing it anyway because she feels that she has to be the one to make the hard choice, so that Oliver doesn’t have to this time, was an effectively tragic way to show that Oliver isn’t the only one on Team Arrow that has had to make difficult choices. I really hope that the show explores the fallout of Felicity’s actions next week, especially since Oliver and Felicity appear to be trapped in the fried Arrow Cave for now. After all, as Diggle says, if two of the most morally upstanding people he knows are crossing the line, one has to wonder if there even is one anymore.

Arrow 5.19: "Dangerous Liaisons" Review
Arrow had Felicity making a hard choice for the good of the team this week, providing a mostly good shift from the proper mission of chasing Prometheus.
THE GOOD STUFF
THE NOT-SO-GOOD STUFF
2017-04-27
83%Overall Score
Reader Rating: (0 Votes)
0%