Superstore has been building up to Cheyenne’s and Bo’s big day throughout the season, and finally, that day has come in this week’s episode. “Cheyenne’s Wedding” completely took the employees outside of Cloud 9, in what’s probably the first episode of the series to date that didn’t really feature the store in any way. Fortunately, this nonetheless served as a particularly strong penultimate episode for Season Two, as several character relationships radically shift, and Glenn has to struggle with having to imminently fire six of his employees.

With the employees being outside of Cloud 9 for Cheyenne’s wedding, the storylines became entirely character-focused, and were naturally heavy on the romance to boot. As you can imagine, this means that a huge chunk of the episode is dedicated to moving the final pieces into place for the budding Jonah/Amy romance, as Jonah and Amy take their separate dates to the wedding, where tension inevitably builds, as they try too hard to deflect suspicion that they are, “Workplace spouses.” 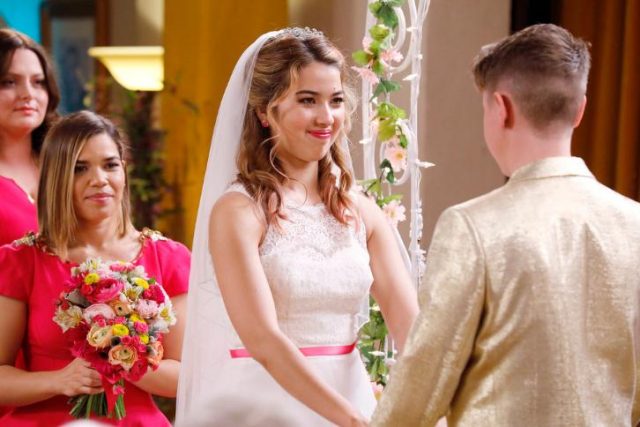 Obviously, viewers with any semblance of a brain know what’s really going on, which helped to make the final scraps of futile denial between Jonah and Amy quite funny. Jonah, naturally, is the biggest over-compensator, completely putting off Kristen as he tries to assert to everyone that he doesn’t like Amy, which is clearly a bold-faced lie. Amy, meanwhile, tries to act like everything is alright with Adam, even though, again, we already know that their marriage is doomed. This isn’t to say that Amy’s and Adam’s storyline was depressing, but the writing is very clearly on the wall for them.

This episode had quite a bit in common with the Phyllis Lapin wedding from legacy NBC sitcom, The Office, in that the actual wedding merely served as a story backdrop, rather than actually centering on the characters getting married. Both Cheyenne and Bo merely floated around as joke fodder, but this mostly worked, so that the storylines that need to move to a certain spot for next week’s season finale can do so. Dina was the other big joke character for the episode, but obviously, this worked to the episode’s benefit, due to how consistently Dina has been one of the funniest characters on Superstore. Naturally, when Cheyenne is forced to make her a bridesmaid, only awkward things happen.

We also get to pick up with Sandra, after she re-encounters the man from the bar from all the way back during. “Ladies’ Lunch” from this past February. The guy is now dating Carol, as Sandra is forced to attend Cheyenne’s wedding alone. Carol being an abusive, nasty girlfriend feels like a low-hanging fruit, and like the Jonah/Amy plot, which naturally ends in the implosion of both of their relationships and subsequent realization of their feelings for each other, the bar guy walking out on Carol is a pretty predictable turn. Still, it was nice to see Sandra get her shot at love in the end, in a surprisingly genuinely romantic final minute for the episode, which made for a satisfying Season Two reward for the consistently bullied and put-upon Sandra.

Finally, the wedding is used as a backdrop for Glenn to try and convince Jeff not to force him to fire Cloud 9 employees. After Garrett convinces Glenn to force Jeff into the wedding, complete in awkward frisbee golf attire, Jeff is mostly left to bumble around with Cheyenne’s daughter, Harmonica. Like Dina and Garrett, and even Cheyenne and Bo, Jeff was mostly left as the butt of jokes in this episode, but he did get something of a confrontation with Mateo after their break-up, which was sort of funny… Though also over very quickly. That said, Jeff flipping Mateo off several times while talking about how much he adores Harmonica was an amusing end to Mateo having to face the music for dumping Jeff the way he did.

Things naturally end with Glenn accidentally blurting out to the entire wedding that he has to fire employees, as Jeff beats a quick retreat. That’s to be expected, and we’ll have to see who gets a pink slip in next week’s season finale, even if the lead employees are no doubt safe. Beyond that, “Cheyenne’s Wedding” delivered a very funny and satisfying final product, which made Cheyenne’s and Bo’s anticipated nuptials well worth waiting for. Several of the story turns were expected, particularly Jonah and Amy being perfectly positioned to realize their genuine love for each other, but what matters most is that the episode was both hilarious and heartfelt. It’s enough to make you hope that Glenn doesn’t have to let go of any of the recognizable Cloud 9 family next week.

Superstore 2.20: "Cheyenne's Wedding" Review
Superstore delivered a funny and satisfying wedding for Cheyenne and Bo this week, even as its blossoming romances can be predicted.
THE GOOD STUFF
THE NOT-SO-GOOD STUFF
2017-04-28
90%Overall Score
Reader Rating: (0 Votes)
0%