Gotham started off its ‘Heroes Rise’ arc on a high note last week, with a strong midseason premiere that provided a standout villain hook for Cory Michael Smith’s now fully-christened Riddler. Unfortunately though, this week’s episode stalled a bit more, due to having to continue moving Gordon and Bruce to their new story locations. “These Delicate and Dark Obsessions” at least paid dividends with the tense new partnership between Penguin and Ivy Pepper, but it also felt like much of the story had to be proceeded by Bruce and Gordon acting illogically impulsive and stubborn, rather than seeing simple reason.

Gordon continues to be pulled into the orbit of the Court of Owls this week, as Frank tips him off toward evidence that the Court is preparing to bring a dangerous weapon into Gotham City in an effort to cleanse it of its evil. I can’t help but wonder if this is related to the soon-approaching League of Shadows, but so far, there’s no direct mention of what this weapon is. Not even Frank seems to know, with Gordon even desperately enlisting Barbara to go torturing criminal dock workers, which almost works, until Talon comes to take out Barbara’s and Tabitha’s men, forcing them to make a quick getaway. 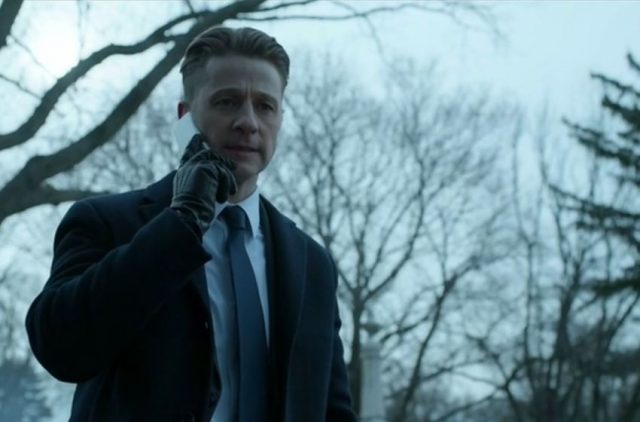 The idea of Gordon having to use his wits to stop a weapon that has the entire city in its sights is interesting, though a lot of the material with the Court of Owls felt a bit problematic this week. Frank admits that the Court has tried cleansing Gotham City of evil twice before, and yet, the cycle of violence and crime always returns. So, why exactly is the Court just doing the same thing again? Hasn’t it been proven that it doesn’t work? Moreover, the intrigue with Frank’s character is completely extinguished by the end of this episode, after he kills himself to get Gordon a spot in the Court of Owls. I guess he was a good guy after all. That’s nice to know, and his shocking suicide was a nice way to get Gordon in with the Court, but surely, the show could have kept us guessing about Frank’s true agenda for a few more weeks? Also, on one last note here, why the hell did Gordon think arresting Frank would do him any good? Obviously, that wasn’t going to work! Why does Gordon suddenly care so much about proper legal procedure anyway? That’s not like him, at least not on this show.

Bruce also plays a big part in this episode, as he becomes the prisoner of a mysterious old man known only as ‘The Shaman’, who says that Bruce is blocked by pain. The Shaman has a particular training regime in mind for Bruce, which Bruce doesn’t seem to understand, though obviously, Batman/DC fans can anticipate that The Shaman could be putting Bruce toward his first bout of serious training in the mission of becoming the Dark Knight. The show even lays this implication on pretty thick, with The Shaman declaring to Bruce that Gotham City needs a protector, and only Bruce is fit to be that protector. Why? Well, I guess The Shaman loves the DC Universe as much as the viewers. Beyond that, there’s not really an explanation yet.

The idea of Bruce still being stuck in the alley and dwelling on his parents’ murder makes sense, as does the idea of The Shaman having to train Bruce to overcome his anguish so that he can embrace the man, and the hero, that he’s meant to be in the future. For now though, it just doesn’t feel like Bruce’s storyline is taking any interesting steps forward. We’ve already seen the murder of Bruce’s parents in Crime Alley, from this show’s very first episode in fact, and beyond The Shaman using mind tricks to have Bruce diving into his own psyche, this storyline ends by telling us what we already know; Bruce is tormented by his parents’ death. Well, no shit! Hopefully in the coming weeks, we can start getting an interesting look at just how Bruce is going to get past this, but in this episode, it didn’t really happen.

Surprisingly, like I said, it was the Penguin/Ivy subplot that served as the highlight of this episode. Penguin is rude and dismissive of the childish Ivy, declaring that he has big plans when it comes to forming an army and taking back Gotham City again. When Penguin tries calling back his former goons however, he ends up betrayed, with Ivy’s man-manipulating perfume saving the day, and exposing Penguin’s former thugs as disloyal. This is easily the best use of Maggie Geha’s older Ivy yet on Gotham, and I’m glad to see that the show is finally finding a proper use for her! Ivy’s idea of Penguin building an army of Indian Hill-style freaks also has lots of promise, and should hopefully help cement both Penguin and Ivy as gradually moving more in line towards their freakish incarnations in DC Comics lore. 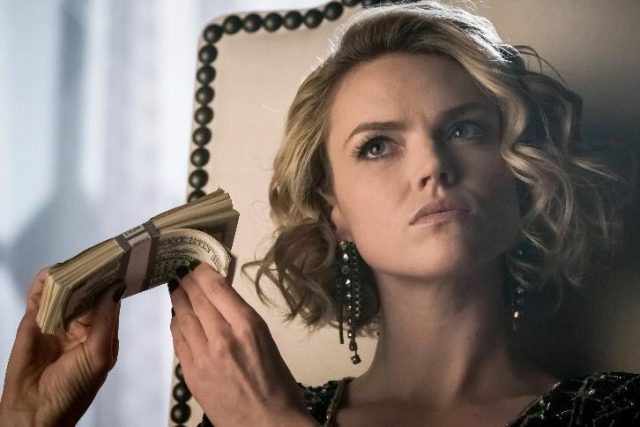 “These Delicate and Dark Obsessions” felt like it had to waste a week to get Gordon and Bruce to where they need to be, without much of note accomplished for either lead hero until the very end of the episode. As is common on Gotham, the villains felt like they accomplished more than the heroes in this latest offering, as Ivy finally starts demonstrating a serious step toward her future as Batman foe, Poison Ivy, while Penguin is properly put back on his feet, and given a nice switch in resources for his latest attempt to take back Gotham City. The Riddler remains in the wind for now, but the focus on Penguin and Ivy went over pretty much perfectly this week. Now that Gordon has finally gotten his meeting with the Court of Owls, and Bruce is finally beginning his training though, hopefully we get a more interesting and exciting episode of Gotham next week.

Gotham 3.16: "These Delicate and Dark Obsessions" Review
Gotham frustratingly stalled this week, as Gordon and Bruce waste time fighting the story current, though a great subplot with Penguin and Ivy proves to be a highlight.
THE GOOD STUFF
THE NOT-SO-GOOD STUFF
2017-05-02
72%Overall Score