Arrow tried to mix things up a bit with a very different sort of scenario this week, though this also meant continuing to stall before Oliver’s final battle against Prometheus during the season’s climax. “Underneath” revisited the Oliver/Felicity romance amidst a harrowing survival story, as the two become trapped in the bunker, following the Prometheus/Helix EMP that obliterates all of the electronics in the Arrow Cave. With a limited air supply and no direct route out, the two have to improvise while sorting out their tangled feelings for one another.

This is an interesting idea for an episode centering heavily on Oliver and Felicity, but as with this week’s episode of The Flash, this otherwise good idea for Arrow feels like it’s placed way too late in the season. The battle with Prometheus should be amping up, and yet, it feels like Arrow is treading water with a filler episode, since it’s not quite ready to pit Oliver against Prometheus quite yet. I suppose that’s fair, but revisiting a romance that’s already over didn’t make for the most compelling hook in an otherwise cool survival concept.

Oliver and Felicity finding traps around all of the obvious solutions for exit routes helped create a great atmosphere of tension, especially when Oliver is injured early on, forcing Felicity to try and keep him focused. There was an interesting idea in limiting the both of them here, as Felicity’s bio-implant is destroyed by the EMP, paralyzing her again, while Oliver’s injury means that he can’t exert himself too hard, lest he pass out. When the episode focused on the two trusting each other’s methods to get ahead, even when they run into traps, this is when the episode was often at its best.

Where the story faltered though, sadly, is in trying to shove the failed Oliver/Felicity romance down viewers’ throats, especially through an ill-advised series of flashbacks to the immediate aftermath of Damien Darhk’s death at the end of last season. Apparently, Oliver had another off-screen encounter with Count Vertigo during this time, but rather than show that off, something that would have definitely been more interesting, the episode instead has Oliver and Felicity hooking up in the Arrow Cave, before Felicity tells Oliver that it’s nice to hook up, but they can’t be together. Frankly, this just makes both Oliver and Felicity look bad, since Oliver is setting himself up to get hurt, while Felicity is making herself look flighty and careless. 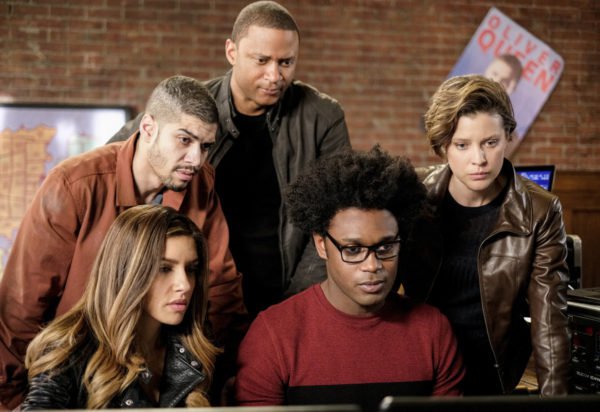 Further hurting this idea is that it wraps back around to Oliver brooding about his inner darkness, and trying to push Felicity away because he doesn’t want her to become who he is. Granted, Oliver fully opening up about not trusting himself, and having that be a driving force in wanting Felicity to stay away from Helix, went over a little better, even if the episode still rehashed an emotional conflict that this show has done to death already. The show just needs to allow Oliver and Felicity to get over themselves and move on! When they keep being pushed back into these same emotional dead ends, it’s a dis-service to their characters, and feels like too much CW flavouring is bleeding into the writing.

Still, Team Arrow having to work together to save Oliver and Felicity made for good material, like I said, beyond a methane gas trap that really has no reason to be there, beyond providing another arbitrary time limit to fight against. There’s no villain this week, with even Chase/Prometheus almost entirely absent once again, even if the end of the episode does show him meeting Oliver’s son on the street, likely spelling out another kidnapping. With the greatest threat this week being time and imminent doom, Lyla reveals that she had A.R.G.U.S. secretly reverse-engineer Curtis’s T-Spheres, frustrating Diggle even further, though the action being for the greater good of saving Oliver and Felicity does allow him to eventually come around. Diggle and Lyla finally reconciling is good, since forcing them to fight in the first place was also not totally effective. The two realizing that they both need to trust and support one another, even if they don’t agree with the other spouse’s decision, was a fair enough way to end this conflict.

The episode ends with a small bit of hope for a future rekindling of the Oliver/Felicity romance, but honestly, I’m not sure if many viewers will really want that. “Underneath” did right by its survival concept, even if it made the Arrow Cave look woefully inefficient in the event of its electronics being disabled (that gas trap feels like a particularly stupid idea, frankly, for exactly the reasons portrayed in this episode!), plus it’s tough to argue that the story didn’t really make the aborted Oliver/Felicity romance any more appealing since it was mercifully killed during the previous season. There’s only three episodes left in Season Five, but with Chase having snatched Oliver’s son, while all of Chase’s convictions are about to be thrown out (likely creating a good Star City crime wave excuse for the show’s already-confirmed sixth season), here’s hoping that Arrow fully commits to an exciting climax over the next three weeks, rather than revisiting tired ideas that viewers are probably already sick of.