Doctor Who returned things to the present day this week, in another standout episode that made for a nice horror-style mystery, as Bill takes up residence in a new location. “Knock Knock” brought The Doctor’s latest incident to a smaller scale, but this ended up working incredibly well, creating a highlight episode for the latest season of Doctor Who, as Bill and a series of students become trapped in an old house with The Doctor, an old house that seems to want to feed on its inhabitants!

At first, things start simply enough. Bill starts looking for a new place to live along with a group of other friends, finding that most of the flats on offer aren’t quite up to snuff. When the group finds a large, old estate for a very reasonable price though, they’re all too happy to sign a contract and move in, with The Doctor even using the TARDIS to help Bill settle in! I’m actually surprised that The Doctor has never applied the TARDIS in such a way before. He honestly could make a legitimately awesome moving business that way!

Regardless, Bill and everyone think they’ve found a house that’s too good to be true, as the landlord allows them to move in right away, with no outward conditions. The Doctor, however, suspects that something isn’t right, and lingers around the area, until he’s inevitably discovered. This is around the time when the first of the new tenants goes missing suddenly, amid a record that keeps playing the same sustained and repetitive string of music.

As a fairly clean, but no less effective horror mystery, this episode did a great job of building up a tense atmosphere, with the house itself as the threat. Clearly, the landlord can’t be trusted either, as he seems to get around the house with superhuman efficiency. When Bill and another tenant discover one of their friends seemingly sucked into the house, they come to realize the horrible truth, only to find themselves shut into the estate, with no means of escape. Fortunately, The Doctor is with them, and thanks to his help, everyone quickly discovers that a series of alien bugs that become the wood of the house itself is to blame for the disappearances. 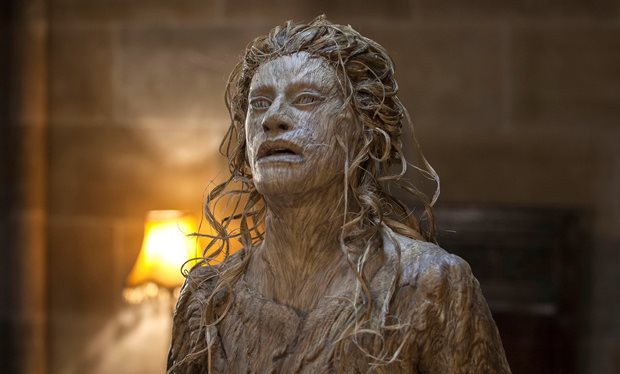 Apparently, these disappearances have been going on for a long time too! Every twenty years or so, the house needs to draw in new tenants to devour, with Bill and her friends being the latest victims. Eventually, it’s down to just The Doctor and Bill, of course, though it’s here that they learn that the ‘Dryads’ (the name The Doctor gives the bugs), are being manipulated by the daughter of the landlord. Apparently, the landlord is capturing folks to prolong his daughter’s life, after she took ill and was about to die. It seems like a pretty open-and-shut mystery, though there’s one last wrinkle, when The Doctor discovers that the landlord isn’t wood, despite the daughter being turned into a wooden creature that commands the bugs; The ‘daughter’ is actually the landlord’s mother, not his daughter.

Apparently, the story is much the same, though the landlord hid the secret from his mother, since her memories are the one thing that the Dryads couldn’t replicate. This created a nice tragic allegory to not being able to move on, which is another conflict that Doctor Who has touched upon in its current run already (hell, that was even a focus in the season premiere a few weeks ago!), even if the final resolution was once again a little overly convenient. The mother simply has the Dryads eat both her and her son, and the house vanishes, as The Doctor tells the tenants to find a new house. Oh yeah, the tenants all survived in the end, which also felt a little overly convenient. The complete lack of consequences somewhat deflates the otherwise strong horror element, as Bill and her friends presumably just walk off as if nothing had happened. Lame.

There’s one last tease as the episode closes out as well, with Nardole calling The Doctor back to the vault, just in time to hear a piano playing from it. Once again, this is a great added step to teasing just who is inside the vault, and yes, it certainly appears to be a ‘who’ at this point, not a ‘what’. Not only that, but The Doctor even seems friendly and acquainted with whoever is inside, with the episode ending as he sends Nardole away, so that he can have dinner with his prisoner. It’s looking increasingly likely that a fellow Time Lord is inside the vault, but who could it be? Is this Missy/The Master, or could it be a prior incarnation of The Doctor himself? I imagine we won’t find out until the end of the season, but the continued buildup to the vault’s mysterious prisoner continues to be fantastic.

“Knock Knock” offered another standout mystery for The Doctor and Bill this week, even if it is another mystery with a surprisingly clean and convenient resolution. That seems to be a recurring issue throughout Series Ten of New Who so far, but at least the rest of the storytelling remains pretty superb. It’s really too bad that this is the final season for showrunner, Steven Moffat, since he seems to be doing his best work on Doctor Who in his final tenure, but I suppose that there’s something to be said about sending oneself off on a high note. Appropriately then, the final batch of adventures for the Twelfth Doctor still has yet to disappoint!

Doctor Who 10.4: "Knock Knock" Review
Doctor Who delivered a great horror-style mystery this week, as Bill and a group of students become trapped in a house that's eager to devour them.
THE GOOD STUFF
THE NOT-SO-GOOD STUFF
2017-05-07
90%Overall Score
Reader Rating: (0 Votes)
0%