The Last Man on Earth is concluding its third season with two back-to-back episodes this week, even though the show’s overall fate still remains up in the air. FOX still hasn’t decided whether The Last Man on Earth is being renewed for a fourth season at this point, but fortunately, regardless of whether the show is returning, the first half of the two-part season finale is a fantastic offering, one that starts delivering great payoffs to several major story arcs.

“When the Going Gets Tough” kicks off the two-part season finale event on a generally superb note, as Erica goes into labour, while Carol starts becoming freaked out at the prospect of having a baby. Matters aren’t helped by Erica’s labour undergoing some complications, while Phil is his usual annoying self, trying to help, but only getting in the way. Phil is eventually booted somewhere else with Jasper, though not before some hilarious highlight gags, with the crowning one being when he ill-advisedly cuts out a mask of the other Phil Miller to put on, before imitating his voice. Oh dear…

That equally freaky, racist and terrible idea fortunately keeps on giving as Phil takes Jasper to the nearby park, complete with showing him how to slide down a slide with the aid of vegetable oil. After bearing witness to the terrified Carol, who creepily listens to audio recordings of laughter in her living space via another highlight gag, Jasper becomes concerned that Erica will die. Phil, of course, tries to console Jasper, but only ends up making everything worse, again, as he tells Jasper that he has a better chance of dying than Erica does once he’s on the slide, before giving Jasper a series of hilariously incorrect information about how babies are delivered.

Back at the usual birthing area, Gail and Todd try their best to help Erica, and for the most part, these sequences were played pretty straight. That’s appropriate though, considering that Erica starts passing out, begging for an epidural, and worst of all, her baby appears to be in a breech position, meaning that it will be impossible to deliver before it’s turned around. Melissa tries to step in and help, though they still don’t have enough hands. It’s up to Carol to find her courage and assist, but she’s nowhere to be found… 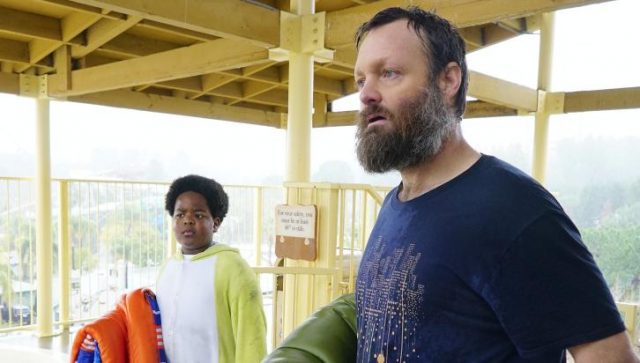 As much as seeing Carol scared and listening to creepy laughter in a ridiculous effort to comfort herself is great, it was the pep talk from Melissa that really made Carol’s story arc satisfying. Melissa using the allegory of turbulence to describe childbirth is inspired, and after trying to write her own obituary in advance, Carol eventually comes to realize that she can’t be a coward. After joining everyone else, and doing some really forced comedy bits (hey, it’s more helpful than Phil!), the baby finally gets to be turned around, allowing delivery to take place!

After the initial breech complication, Erica’s baby ends up being delivered pretty efficiently, thankfully, with a healthy baby able to meet a healthy mother in the end. Erica having a baby girl and naming her Dawn, as a reference to the dawn of a new day for humanity, was very emotional and uplifting, and the victory of her surviving labour, plus everyone getting a win, made for a great contrast to the loss of the other Phil Miller under similar circumstances during last season. There’s also another effective contrast towards the end of the episode too, as Phil and Jasper discover a nuclear power plant that’s on fire, seemingly about to melt down! Oh no! Looks like the stakes are officially raised for the season’s final episode!

Putting aside any potential quality in the follow-up episode, “When the Going Gets Tough” excelled in pretty much every way as the first half of this week’s two-part season finale for The Last Man on Earth. The delivery of Erica’s baby had just enough tension to satisfy, though the final result of a new baby and no harm to either baby or mother felt like the best result overall. Considering the imminent crisis that is facing the survivors, which Phil and Jasper have only just discovered, it was great to have the show focus on a swell of joy and hope as the backbone of this episode. We’ll see how that joy and hope holds up as Phil and Jasper have to try and save the day in the season’s final episode, but in the first half of the finale event, we couldn’t ask for a better way to start wrapping up the show’s latest, and hopefully not last, season!

The Last Man on Earth 3.17: "When the Going Gets Tough" Review
The Last Man on Earth kicks off its two-part season finale with a superb first half this week, as Erica goes into labour, and Phil discovers a big problem.
THE GOOD STUFF
2017-05-08
95%Overall Score
Reader Rating: (0 Votes)
0%