Back a couple of years ago, a masocore arcade-style game called Penarium graced PC and consoles. The game was well-received, and went on to become something of a sleeper hit, though unfortunately, it wasn’t enough to save its developer, Self Made Miracle from closure. Despite the loss of its developer however, the assets and rights to Penarium appear to have stayed with publisher, Team17, allowing Penarium another chance at success via its brand new mobile port for iOS and Android devices!

The new mobile version of Penarium is something of a surprise, stealthily launching on the App Store and Google Play Store not long after Team17 brought another gem from their publishing catalogue, The Escapists to mobile gaming storefronts as well. Much like the mobile port of The Escapists, the iOS and Android incarnation of Penarium is also a pretty great one overall, even if it did have to suffer an inevitable compromise or two in being ported to mobile platforms.

At first glance however, the game appears and plays virtually identically to its previous PC and console ports. You control a young boy named Willy, who has grown dissatisfied with his life as the son of a modest farmer, and runs off to join a mysterious circus. Unbeknownst to Willy however, this circus is known as Penarium, and it specializes in making its young entertainers perform their lives, dodging traps, smashing barrels, popping balloons, and pressing buttons, all while being careful not to fall into bottomless pits! If it sounds twisted and challenging, then it looks like you understand the aim of Penarium!

Penarium is divided into two main modes in its mobile port, with those being the Campaign Mode, where you undertake a series of challenges across three major areas that chronicle Willy’s career story at Penarium, and the Arcade Mode, where you simply try to smash as many barrels and amass as many coins as possible before you die. The Arcade Mode comes in three variations, one for each world, and gets gradually more challenging with each one, though also allots more coins for barrels that you successfully smash as you bump up the difficulty, as a trade-off. Coins can be used to purchase cards that grant Willy power-ups and benefits as well, allowing you to make the challenging campaign stages a bit more manageable. 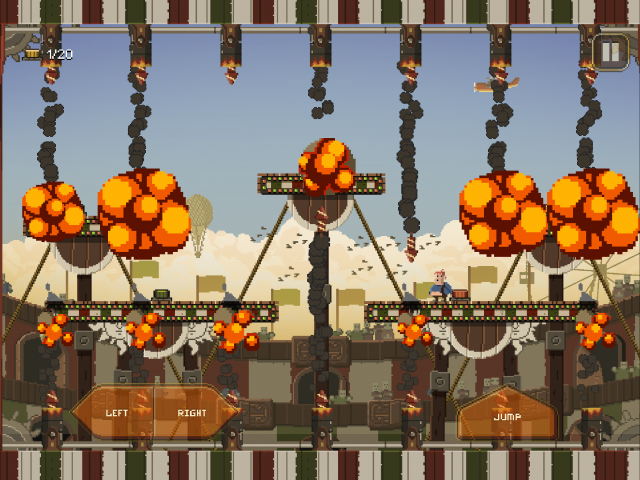 The many traps that come Willy’s way are as unpredictable as they are deadly as well! Early in the game, you’re up against fairly simple missiles and machine guns, which you simply need to avoid being hit by, though as you proceed through each campaign area, the traps become more devious. These can include birds that take away the barrels you’re supposed to smash, big steel balls that roll or bounce toward you, heat-seeking missiles that follow you, spiked crushers that force you to quickly move to the arena’s center, and scrolling lasers that force you to keep moving and looping in one direction, lest you be fried if you’re too slow, among other hazards! The stage designs also vary and change quite frequently in Penarium, leading to an unpredictable and engaging mix-up in the tricks and traps that you’ll face as you progress on. There are no proper enemies in the game (the barrel-thieving birds are the closest you get to actual foes), but Penarium really doesn’t need them, since its deadly traps and environmental hazards are more than enough to keep Willy running and jumping for dear life throughout each stage!

The objectives also vary between each campaign stage, even though you’ll consistently be smashing barrels for as long as you can in Arcade Mode. Some campaign stages still have you smashing a certain amount of barrels, with the traps changing upon every five or so barrels that you successfully smash (this is done simply by touching them), though certain other stages have alternate completion goals. Some stages have you catching falling potions and matching them to the correct colour of cauldron to concoct a potion, for example. Others demand that you press a series of coloured buttons in the right order, lest you be killed. Yet more stages then force you to quickly run between an array of balloons, with Willy having to restart the challenge if he’s too slow. The varied nature of objectives and the equally varied traps never lull players into any kind of comfort zone, and with a game as brutal and punishing as Penarium, that feels quite appropriate! 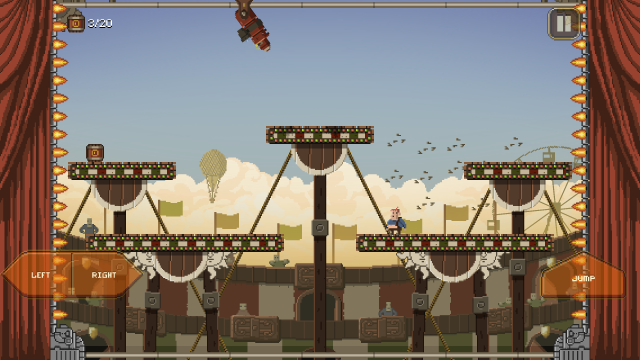 The controls in Penarium are quite basic though, at least, since you simply move left or right and jump, using a virtual button scheme on the bottom corners of your smartphone/tablet display. The game continues to control quite responsively on mobile devices, with inputs feeling snappy and agile, allowing players to quickly and efficiently navigate their Penarium arenas for each challenge. Beyond the downscaled resolution for smaller mobile screens, visuals and performance are indistinguishable from the PC and console builds of Penarium too, which may not be a tall order when one considers the pixel art style (a style shared by fellow recent Team17 mobile graduate, The Escapists), but is appreciated nonetheless. Performance is really key too, since Willy dies in a single hit from touching any hazard, which will force you to restart a challenge, necessitating highly responsive movement without latency. Fortunately, you do get infinite retries on top of the exceptionally responsive movement though, so there’s no disadvantage to practicing and failing until you truly learn to master each stage, especially since it takes less than a second after failure to restart and try again.

As you can imagine however, translating a game designed around a controller to a touch display doesn’t always perfectly go off without a hitch. One of the predictable caveats to being able to take Penarium on the go via your mobile device is that the controls don’t always respond perfectly, and can occasionally be fussy with your thumb placement. There are times where Willy will stop cold and plummet during a jump, for example, or times where Willy will careen off in the other direction and drop off a pit, simply because the game didn’t like where your thumbs were placed at that moment. That’s merely when you’re playing on a smartphone too! On a tablet, Penarium becomes even more unwieldy and hard on your hands, with Willy’s inputs becoming even less reliable and clumsy. It really seems like this is a port designed explicitly with smartphones in mind, since that’s where you get the most reliable responsiveness and comfort, relatively anyway.

Fortunately, beyond those small touch input issues, this is a well-translated mobile port of Penarium, so long as you can handle the occasional control hiccups. Penarium even offers Game Center support on iOS and Google Play Achievements on Android to boot, which is an appreciated addition, and gives you a few extra gameplay feats to strive for, beyond simply playing through the campaign, and coming back to chase scores in the Arcade Mode. Leaderboards can also show you how you stack up with your Arcade Mode scores as well, giving score-chasers plenty of competition at all times. Attaining expert scores in the mobile version of Penarium is an even greater challenge than in the PC and console builds that came before it too, due to the slightly less reliable touch controls!

The Campaign Mode and Arcade Mode are ultimately all you get in the mobile port of Penarium though, unfortunately. While the PC and console builds of Penarium included competitive and co-operative multiplayer modes, these modes have been completely removed from the iOS and Android builds of the game, leaving both of them entirely single-player-only. This is disappointing, though as with the occasional stumbles of the touch control scheme, it’s an expected caveat to compensate for the convenience, portability and reduced price that comes with the opportunity to play Penarium on your mobile device. At just $1.99 USD/$2.49 CDN, Penarium is a steal on mobile platforms as well, considering its varied and addictive challenges, which feel especially at home on smartphones in terms of their design, if not always the touch inputs. 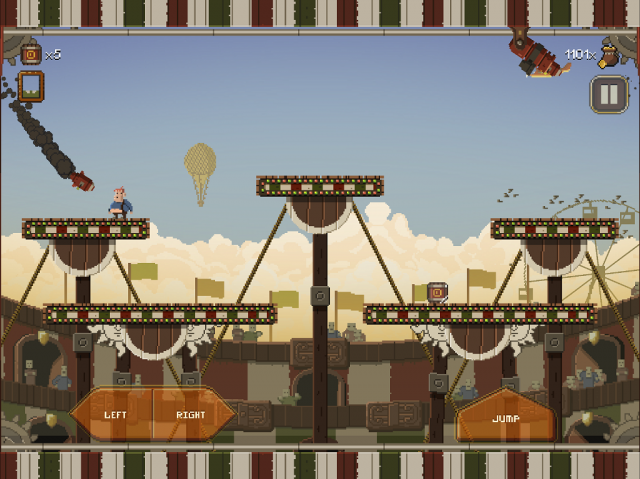 Despite some of the expected caveats to its extra affordable mobile port though, Penarium fundamentally remains a standout arcade-style masocore game on iOS and Android, one that aggressively punishes even small mistakes, though is founded on a smart challenge that is tough, but ultimately (mostly) fair. The bite-sized score-chasing is very well-suited to smartphones, especially for players who don’t mind the occasional issues with the touch controls, and while the challenge is brutal, it’s just entertaining enough to keep you coming back to outdo your previous scores, and wanting to progress just a little bit further in the story campaign. The gameplay may be simple and straightforward, but mobile gamers that are eager to test their skills could potentially lose quite a bit of time to Penarium’s gripping and comical punishment. If you missed Penarium on PC and consoles back in 2015, or are just looking to fall in love with it all over again, then this belated iOS/Android re-release is well worth adding to your roster of smartphone apps, especially considering its paltry asking price!

This review is based on an iOS download of, “Penarium”, provided by Team17