Gotham went back to spotlighting the up-and-coming Riddler in this week’s episode, as he tries to expose the secret dealings of the Court of Owls. “The Primal Riddle” had Riddler’s attention turned to a less innocent force this week, while many other developments also unfolded throughout Gotham City. Fortunately, this did lead to a more exciting episode of Gotham than we got last week, though at the same time, this week’s storyline did feel rather over-stuffed, having to cram many necessary plot elements into place so that the ‘Heroes Rise’ arc of the show can move forward.

Fortunately, the core material with Riddler, Gordon and the rest of the GCPD was pretty superb this week. Nygma’s ultimate transformation into The Riddler has been well worth the wait, and he’s only become a better antagonist for the show since donning his iconic criminal mantle from DC Comics lore. Seeing his quest to be the smartest man in Gotham City take another unexpected turn was great, as he quite literally announces himself on a Gotham City stage, before kidnapping Mayor James and forcing him to spill the whereabouts of the Court of Owls, threatening to kill him on live TV if he doesn’t capitulate.

This need for spectacle and attention behind The Riddler is perfectly realized, especially as most of the GCPD does wind up chasing their tails because of him, with only Gordon able to keep up to any degree. Even Bullock makes some bone-headed moves, such as actively leaving Mayor James unattended to participate in a brawl (hell, James being successfully snatched by Nygma is basically his fault alone), but Gordon using his own knowledge of the Court, fighting knowledge with knowledge, made for a really interesting conflict between himself and The Riddler, who is quickly gaining notoriety across the city for his brilliant criminal acts.

Another great twist came when Barbara decides to pursue her own agenda with Nygma, having become troubled by the idea of someone else in Gotham City having more control than she does. This had Barbara going back on her word to Tabitha to deliver Nygma to her, which ended up coming back on Barbara in a big way, as a betrayed Tabitha tells Gordon how to disable Nygma’s explosive around Mayor James, thus allowing Nygma to be captured and handed over to the Court. Barbara’s over-the-top reaction to this news was pretty funny too, and made for a nice contrast to the episode’s final dramatic moment, as Gordon proves his loyalty to the Court, and is officially made a proper member. Gordon has sold his soul more than once on this show already, but now, more than ever, we need to ask if he knows what he’s getting himself into! 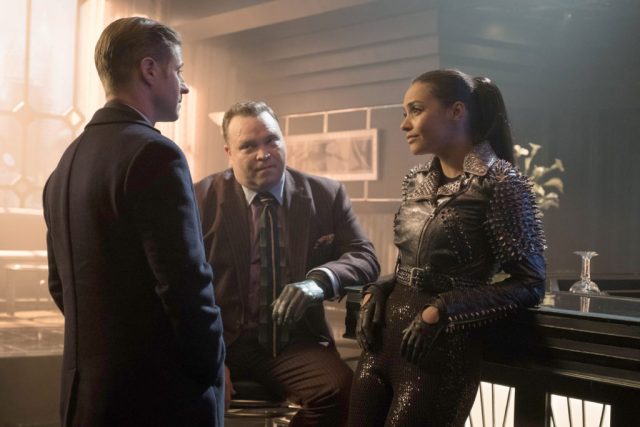 Beyond these storylines though, this week’s episode of Gotham was dragged down by a bloated series of subplots, some of which didn’t really feel that necessary. A subplot with Leslie for example has her desperate to prove that Gordon is behind his uncle’s death, which isn’t entirely false, but still feels like a huge waste of her professional resources and time. Leslie is just becoming way too emotionally unstable at this point, even considering Gordon killing Mario during the Fall finale, and one has to wonder why Bullock isn’t telling her to smarten up and stay in her lane by now.

Another questionably necessary subplot came via Selina and the Bruce clone, with the clone discovering that he is dying after a series of nosebleeds. The Court assures the clone that he’ll live long enough for the real Bruce Wayne to return and for Gotham City to fall, but this nonetheless motivates him to visit Selina. The clone’s twisted love of Selina could have been something interesting to explore, had a sharp time limit not suddenly come up for his lifespan, though even this is brushed aside after he loses patience and pushes Selina out a window. As Selina lies on the ground far below, eyes wide open, body contorted and surrounded by alley cats however, it’s pretty obvious that she’s not dead, especially since this moment is stolen wholesale from Tim Burton’s 1992 movie, Batman Returns. Honestly, the weirdness and surreal nature of Burton’s Gotham City feels like too much for the slightly more grounded Gotham as well. On this show, the Catwoman moment just looks too bizarre, and this is even true on a show where Hugo Strange has brought the dead back to life, and characters like Mister Freeze and Poison Ivy are beginning to realize their superhuman abilities. 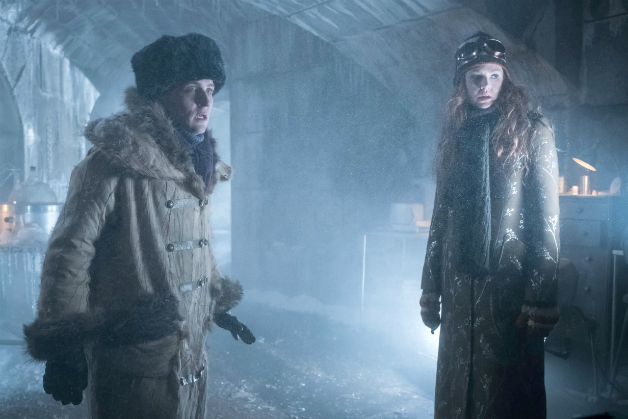 Oh yeah, speaking of Mister Freeze and Poison Ivy, they’re both in this episode too, alongside Penguin, and even Bridgit Pike, the Firefly forerunner. Penguin and Ivy were quite serious about rounding up a posse of freaks to take back Gotham City, though honestly, this felt like a filler arc that only existed to set up future episodes. The reunion with Mister Freeze and the proto-Firefly isn’t so bad, especially when Firefly displays an ability to handle even the hottest of objects without any pain now, but these two characters basically do nothing but bicker at this point. The same is pretty much true of Penguin and Ivy for now. I’m sure this will go somewhere interesting later, but for now, it feels like Hugo Strange’s surviving freaks are being forcibly pushed towards another story arc that may or may not be successful. I still like the idea of Penguin leading a freak army, but is there any room left in the back half of Season Three for such a storyline at this point?

“The Primal Riddle” had a lot going on, and while this improved the pacing and made for a more exciting affair, it did have this week’s Gotham episode falling back on filler material and forced story arcs that will probably be pushed aside as soon as next week. We didn’t even get to check in with the real Bruce Wayne at all in this episode, probably because too much else is going on, though at least the primary Riddler/Gordon storyline went over pretty exceptionally. The idea of both Gordon and Nygma being in the company of the Court of Owls could present as much danger as it does possibility, even if other forced moments with the future Batman’s familiar Rogues Gallery were less effective. I’m also not sure why Leslie’s vendetta is being completely ignored by the GCPD either, when she’s really not being very subtle about it. That’s probably small potatoes in the end anyway, since the clock is still ticking for Gotham City, and with Gordon in the belly of the beast, the struggle to save it is going to heat up very quickly over the next few weeks!

Gotham 3.17: "The Primal Riddle" Review
Gotham delivered a more exciting but rather overstuffed episode this week, despite a standout main storyline with Gordon and The Riddler.
THE GOOD STUFF
THE NOT-SO-GOOD STUFF
2017-05-08
75%Overall Score
Reader Rating: (0 Votes)
0%