iZombie started finding a particularly enjoyable groove again with last week’s episode, and this week, the entertainment value stayed on a sustained high note, with another high point for the current Season Three. “Some Like it Hot Mess” finally bumped up the show’s procedural element with a significantly more clever and engaging case-of-the-week, while the secondary character arcs shone in pretty much every respect as well!

Another thing that is continuing to grow this season is how hilariously Rose McIver portrays every new brain personality that Liv ends up saddled with. This week, a hot mess of a narcissist ends up murdered in her bathtub, leading to Liv becoming an insufferable, absent-minded airhead on not just her case, but also in her personal matters. This not only provided lots of laughs, but even worked great for the drama to boot, especially now that Major has had to take the memory-wiping zombie cure. Finally, Season Three seems to be developing brains that are just as humourous as they are helpful for the case-of-the-week. The murder culprit being the roommate after the victim sold a valuable baseball for rent money was also a great result, especially as the show presented a tangled web of professional and personal misery caused between two different jobs that the woman held, while not being good or well-liked at either. The adultery red herring with one of her bosses was especially inspired.

Fillmore-Graves, meanwhile, was completely set aside on Major’s end this week, but that wasn’t such a bad thing in this case, since it allowed Major to come to grips with his lingering personal demons, as his memories begin to fade. The show tastefully touches on Major’s seemingly final romantic moment with Liv at the end of the previous episode with both humour and heart, and as Major starts writing letters to the people he cares about, we see the names of two women that were never associated with him before. This was a great and very surprising turn for Major, when Liv’s brain leads to her absent-mindedly abandoning him so that he can go to Walla Walla, where it turns out that one of the women that Liv told Major to write to is his mother. Apparently, Major’s mother ran off with a woman when Major was in high school, and Major wasn’t able to deal with it. This reunion was a very sweet way to further capitalize on Major getting a mental clean slate, finding the brighter side in him having to cast aside his past.

That said however, the question about the cure’s memory-wiping effects comes back into play when Don E. pays Ravi a visit, asking for a dose of the cure to pass off to a rich Scratching Post client that is offering to pay handsomely for it. Ravi refuses to share the cure, but he does hear from Don E. that Blaine is indeed faking his memory loss, after Don E. overheard him recently talking on the phone about an old underling that he had killed. Ravi of course takes the opportunity to warn Peyton, perhaps somewhat selfishly, which at first just makes it look like he’s going to dig himself even deeper. That poor romantic, Ravi. 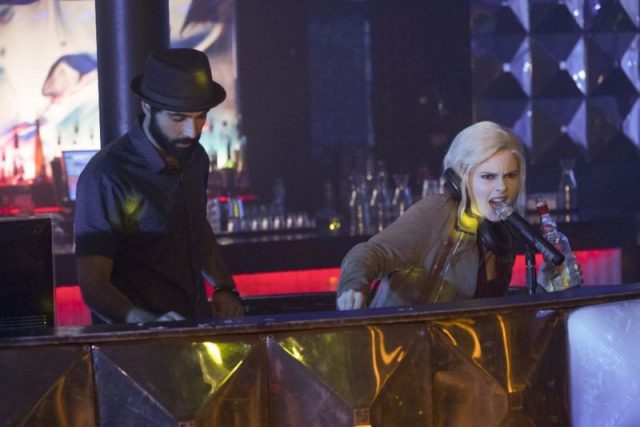 Surprisingly though, the show played against expectation with Blaine in a brilliant fashion. After it seemed like Blaine really had changed, Peyton tells him about the Ravi encounter, and Blaine eventually admits that, yes, he has been faking his memory loss!… Somewhat. Turns out, his memory did indeed go away, but it ended up returning a few days later, and Blaine simply kept the charade going to try and further build his relationship with Peyton. This was a great turn, especially since Peyton blows up at him and storms out, seemingly leaving Blaine primed to become a villain again. Honestly, the enraged reaction from Peyton is a little overblown, especially after she seemingly runs back to Ravi not moments afterward (I know this is a CW show, but Peyton is pretty flighty with men for a supposedly brilliant laywer!), and it does smell a bit of needing to pivot the storyline around Season Three’s halfway point, so that the show can keep moving forward. That’s a pretty minor gripe in an otherwise superb episode of iZombie though.

Of course, with the cure now known to work perfectly, beyond the minor side effect of brief memory loss, Ravi and Peyton tell Liv that she can finally be human again. Liv is naturally overjoyed by this, and tells Babineaux that the current case is their last. Obviously however, this won’t be the case, as everyone goes into the morgue to discover that the cure has been stolen, with Blaine seemingly the likely suspect, especially as he makes use of cure ingredients that Liv’s absent-minded brain left with him. Ravi points out that Major has one dose of the cure left that he never used, though as Major returns upon the end of the episode, he confesses to Liv that he gave his dose away. Liv clearly wasn’t going to be cured of her zombie state, or else we wouldn’t have a show, but seeing her come that close to humanity once again, and losing it to Major once again, was a great and effectively dramatic way to cap off an especially strong iZombie offering.

“Some Like it Hot Mess” continued to have iZombie firing on all cylinders once again, even with Fillmore-Graves sitting out this week’s episode. A smart case-of-the-week, lots of superb character drama, and Liv’s latest close grasp at returning to humanity all made for an especially great episode. Blaine having been outed as a genuine liar, but not as callously as one may have believed, made for an especially great twist, as his relationship with Peyton once again finds itself obliterated, due to another misguided deception. It really does seem like Blaine wants to change, but perhaps at this point, he just can’t figure out how. Peyton coming down on him so hard does feel like a transparent excuse to create more trouble for the protagonists, but the idea of a scorned Blaine becoming a newly dangerous antagonist with a monopoly on zombie cures does present lots of promise for the rest of the season. I’m especially looking forward to seeing how this reacts with Angus, Don E. and their new zombie club business too!

iZombie 3.6: "Some Like it Hot Mess" Review
iZombie delivered another fantastic episode this week, finally bumping up the quality of the procedural end again, and complementing that with standout character drama.
THE GOOD STUFF
THE NOT-SO-GOOD STUFF
2017-05-10
93%Overall Score
Reader Rating: (0 Votes)
0%