Prometheus’ grand game against Oliver still has yet to reach a proper conclusion, though it seemingly approached a genuine climax this week. “Honor Thy Fathers” created a fresh crime wave for Star City, as all of the criminals that Chase prosecuted end up being released onto the streets, while a new bit of torment also comes to Oliver’s doorstep, as a corpse is delivered to the mayors’ office, one seemingly unrelated to Oliver or Chase alike.

This strong mystery ended up anchoring a truly great episode of Arrow this week, and one that nicely made up for some of the failings of last week’s episode. With Prometheus still being at large, along with more criminals than ever for Team Arrow to try and keep an eye on, there was plenty of exciting mystery and drama to be had this week, especially with an equally effective subplot involving Rene trying to reclaim custody of his daughter, and continuing to have second thoughts about it. 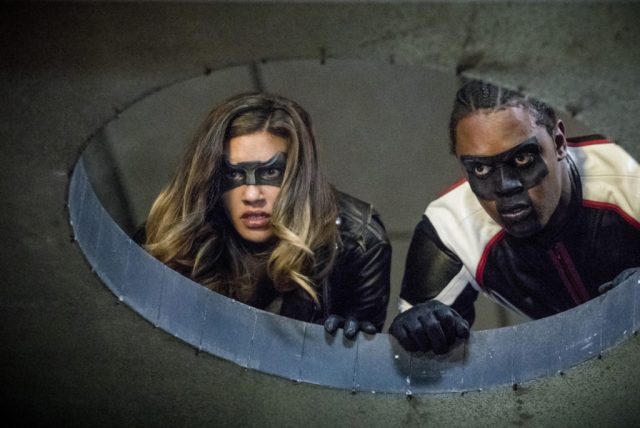 This week also served as an excuse to bring back former WWE superstar, Cody Runnels as pain-immune criminal, Derek Sampson, as Sampson appears to be seemingly working with Chase to resume Chase’s father’s plan of a bio-weapon attack. The return of Runnels is an exciting proposition, though in one of this episode’s only real disappointments, Sampson is pretty much entirely pushed into the background. He serves as a plot device to give Team Arrow a specific criminal to chase, and after they inevitably catch him, he just goes back to jail. We at least get some reliably good action scenes during the encounters with Sampson and his thugs, but Sampson himself was more or less wasted in his return, and that’s a shame.

Meanwhile, the investigation into the mysterious corpse by Oliver and Felicity eventually turns up that the dead man is a former city councilman that knew Oliver’s father. It also turns out that Robert Queen accidentally killed the man, after a scuffle near a pool of concrete resulted in the councilman falling in. Why the two were arguing and shoving each other around near an open pool of liquid concrete is anyone’s guess, and the circumstances of how the late councilman died do feel like a bit of a stretch. Still, this is easy to forget when one sees the strength behind Oliver and Thea having to face a dark new angle to their father’s legacy, one that Prometheus insists that they both see.

Oh yes, Thea is back in this episode, which is also pretty exciting! Thea’s return is aptly timed as well, since this is the perfect opportunity to have her there for Oliver to lean on as he sees an especially shady cover-up by his late father. Thea doesn’t suit up to fight with everyone else, but it’s still nice to see her again, especially when we learn that Oliver intentionally withheld a final video message to Thea from Robert, thinking it would burden her. Thea being the emotional core of Oliver’s conflict, motivating him to face his father’s demons, and eventually giving him the courage to be transparent about them in a press conference at the end of the episode, quickly and effectively capitalized on her return. I do hope that she sticks around, since Oliver is going to need her in the season’s final two episodes, not to mention the Prometheus fallout to inevitably come in Season Six later this Fall.

As for the Rene subplot, it created another great opportunity to continue developing the surprising bond between Rene and Lance, as Lance once again has to try to encourage Rene to show up at a surprise hearing to make his case for custody over his daughter. Rene makes the understandable point that her foster mother has given her a good life, and going over all of the events that led to him losing his daughter in the first place could traumatize her all over again. Despite Lance’s best efforts too, Rene ultimately doesn’t show up to the hearing, making the decision that he’d rather his daughter thought that he didn’t want her, rather than have to give up a good life with a good person. I doubt that this is the last we’ll hear of this, but even if we likely have to wait for Season Six to see where Rene’s decision truly leads, it’s still interesting to see Arrow play against expectation, and have Rene ultimately not decide to reclaim his daughter in the end, much to Lance’s disappointment. 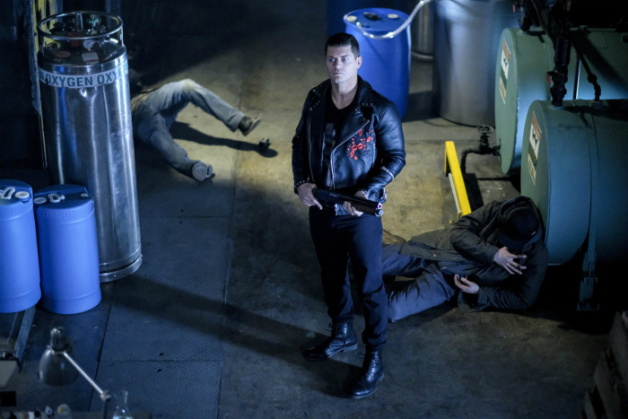 Finally, the flashbacks also made a comeback this week, as we see Oliver and Anatoli return to Lian Yu, to create a narrative that Oliver was simply on the island the whole time, thus maintaining his cover with the Bratva and Amanda Waller. Like the present-day events with Prometheus, the flashbacks have a great sense of approaching a full circle at this point, and the surprise return of Kovar after Anatoli leaves toward the end of the episode should hopefully make for a strong flashback finale for Arrow’s final two Season Five episodes. Again, I’m crossing my fingers that we might somehow get a KGBeast inclusion in the DC Television Universe with Kovar’s return, especially with Anatoli hinting at a history with the KGB at one point, but even if Kovar merely offers one big final battle on the island, I suppose that will still be pretty satisfying.

It’s good to see that Arrow regained its footing so well this week, and is once again moving towards a very promising final battle with Prometheus. Even after Oliver seemingly captures Prometheus and imprisons him at the end of the episode, a cocky smile by Chase during Oliver’s televised press conference about his father’s crimes nonetheless proves that Prometheus is far from finished. Chase’s capture seems to be just the latest step in Prometheus’ sick head games, and I’m looking forward to seeing just what he pulls out next week, in the season’s penultimate episode. The real irony is, Chase gave Oliver ample opportunity to kill him after Oliver revealed that Chase’s father wanted to disown him too. As we’ll no doubt see soon, he probably should have taken that opportunity.