The Big Bang Theory has finally reached the end of its landmark tenth season. The show’s age may be becoming more evident by this point, as Season Ten never really seemed to recover from its diminished momentum that seemed to start this season most of all, though to its credit, The Big Bang Theory’s season finale this week is fairly decent.

“The Long Distance Dissonance” more or less served as one giant wind-up punch for a long-anticipated development among the show’s characters. The entire episode centered on one storyline and one storyline only, which is a bold choice, though at least it does feel genuinely merited by the conclusion of the episode. This storyline, predictably, revolves around Sheldon, particularly due to Amy being temporarily away at Princeton.

The show also makes a pretty cool throwback in this episode, as Riki Lindhome’s Dr. Ramona Nowitzsky makes a return! If you don’t remember her, she was the grad student from way back in Season Two that seemed to have an obsessive crush on Sheldon, namely in the episode, “The Cooper-Nowitzski Theorem”, with the only difference being that she now sports Riki Lindhome’s usual blonde hair, rather than the red hair she had in Season Two. Ramona’s absence is explained by her apparently being the American scientist representative at CERN, and with Amy now being at Princeton, she conveniently comes back into the picture to start sniffing around Sheldon again.

Lindhome is definitely one of the best parts of this episode, as the rest of the characters are simply left to spectate and worry. This is honestly where the episode is at its weakest though, because Sheldon is obviously not going to run off with Ramona. The episode trying to pretend as if there’s some uncertainty to the Sheldon/Amy relationship because Ramona is allegedly trying to steal Sheldon just doesn’t work for that reason alone, let alone the fact that The Big Bang Theory already broke up Sheldon and Amy during last season! Thus, the series obviously can’t realistically do it again. It was bad enough when Leonard and Penny kept breaking up and getting back together!

Like I said though, the whole Ramona thing just serves as one giant wind-up punch for the oblivious Sheldon. Once Ramona inevitably does confess that she wants a romantic relationship with Sheldon, even forcibly kissing him towards the end of the episode, Sheldon responds by immediately hopping on a plane to New Jersey and finding Amy. On an unrelated note, CBS didn’t even try to mask the fact that Amy’s room at Princeton is the exact same set as her old apartment, which is a little distracting, but whatever. Anyway, when Amy finds Sheldon at the door in the middle of the night, he’s bent down on one knee and holding up a ring, asking Amy if she will marry him. Yes, finally, Sheldon popped the question, and the audience naturally loses their minds when this happens. The episode unfortunately ends before Amy answers though, leaving a, frankly, somewhat forced cliffhanger for the wait before Season Eleven starts this Fall. Amy would certainly have to be pretty despicable to say no to Sheldon at this point!

Again, this stinks a bit of The Big Bang Theory trying to force unnecessary suspense and drama where it really doesn’t work. As irritating as Sheldon often is, he’s just too innocent and wholesome to create a believable sense of uncertainty with what’s going to happen with his character in most instances, which is one of the only weaknesses to Sheldon-centered storylines. That said though, this long-awaited development finally happening was a solid way to end Season Ten of The Big Bang Theory, even though it’s pretty much certain that Amy is going to say yes. Again, the show would have to be pretty cruel to drag out the fact that Sheldon and Amy will obviously wind up together in the end, no matter what. Any attempt otherwise would certainly lead to a fan riot! 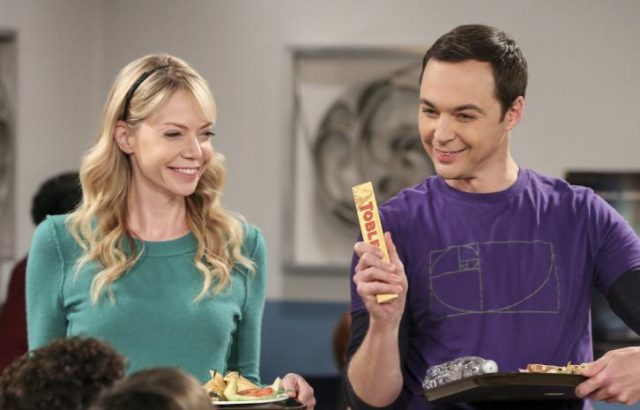 “The Long Distance Dissonance” made disappointingly little use of the other characters beyond Sheldon and Amy (and Ramona), but this season finale was at least an improvement over the noticeably weak Season Nine conclusion. Seeing Riki Lindhome again was pretty fun, plus Sheldon finally proposing to Amy has been a long time coming, and it felt well set-up and executed here. I sort of hope that Riki Lindhome sticks around in Season Eleven, since it might be interesting for Amy to have a nemesis when the path towards a permanent future with Sheldon is otherwise clear, but I suppose we’ll just have to wait and see. For now though, despite whatever stumbling this aged sitcom suffered through in Season Ten, I’m happy that Sheldon finally found the courage to truly take the next big step with Amy, at the very least.

The Big Bang Theory 10.24: "The Long Distance Dissonance" Review
The Big Bang Theory focused entirely on Sheldon for its season finale this week, though offered a decent storyline, made better with the return of Ramona Nowitzsky.
THE GOOD STUFF
THE NOT-SO-GOOD STUFF
2017-05-12
75%Overall Score
Reader Rating: (2 Votes)
88%