FOX still has a handful of shows left lingering on the bubble, though we now have confirmation that another of their beloved comedies will officially be back for next season. Word has just come from the network that critically lauded and fan-celebrated police comedy series, Brooklyn Nine-Nine has been renewed for Season Five, and will remain part of FOX’s programming lineup during the 2017-2018 season. This renewal notice also comes with confirmation that freshman Friday night horror drama, The Exorcist has also been renewed for a second season on FOX’s lineup. 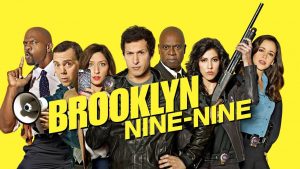 Brooklyn Nine-Nine was one of the sole remaining FOX sitcoms to still have its fate undecided until now. With its renewal now being confirmed, only New Girl, Scream Queens and animated sitcom, Family Guy still have yet to receive an official verdict among FOX’s scripted comedies. FOX recently cancelled Son of Zorn and Making History among their sitcom lineup, both freshman shows that only lasted one season, though also renewed The Last Man on Earth for a fourth season recently, on top of pre-existing multi-year renewal commitments that were already in place for Bob’s Burgers and The Simpsons on Sunday nights.

Brooklyn Nine-Nine is one of the best-reviewed sitcoms on FOX at present, on top of having a passionate and steady fanbase. It has arguably the most star power among FOX’s comedies as well, due to Andy Samberg and Terry Crews both being among the lead cast. Despite this however, the show’s viewership has suffered considerably since its move back to Tuesday nights, after it helped to launch live-action comedy offerings on FOX’s Sunday night lineup during its second season. The series is also not developed in-house at FOX, unlike most of the network’s other sitcoms, and was acquired from Universal Television, making Brooklyn Nine-Nine a bit more difficult to derive profits from as well. The show currently functions as a complement to long-running FOX sitcom, New Girl on Tuesdays, which has also begun suffering considerably in ratings, leading to its status for next season still being uncertain for now.

Keep mobilizing Eggplate for all major news and updates on Brooklyn Nine-Nine, and other high-profile FOX developments.