Arrow didn’t disappoint with the capture of Chase last week, but Prometheus is certainly not finished with Star City and Oliver Queen! After an excellent penultimate Season Three episode for The Flash yesterday, Arrow fortunately delivered a standout penultimate Season Five episode itself this week, with, “Missing” proving to be another highlight for the season, as Oliver’s team starts disappearing under mysterious circumstances.

This was actually subtly foreshadowed last week, when Rene mysteriously disappeared before his daughter’s custody hearing, initially infuriating Lance. After Dinah also doesn’t stop by for Oliver’s surprise birthday party though (which provided some great levity before the highly dramatic events that comprised the rest of the episode), Curtis goes to investigate at her house, only to be kidnapped by a mysterious attacker. Even from prison, Chase appears to be pulling the strings of Team Arrow, leading to a furious Oliver grilling him about what’s happening with his team. 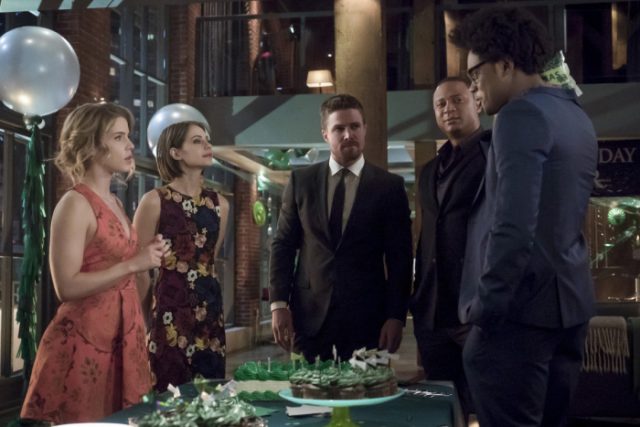 Chase, obviously, is smug as ever, claiming that he will kill Oliver’s crew if he’s not set free. Oliver has no intention of negotiating with Chase, but it soon after comes out that Black Siren has been broken out of A.R.G.U.S. custody, due to the efforts of Evelyn Sharp. Both Evelyn and Talia Al Ghul are back in the picture as of this episode, ready to keep pushing Chase’s agenda after his capture, as is Black Siren, who intercepts Thea and Lance at a safe house to snatch them too. Lance discovering the Earth-2 Laurel was an especially great moment here, especially when he has to realize the hard way that she truly isn’t his late daughter. Once again, despite Oliver’s best efforts, he proves helpless to stop Chase from grabbing his team, thinking that his only option is to send Diggle and Felicity as far away as possible.

Even this proves to be a move that Chase anticipates however, as Talia stops the two on the road, and grabs them in turn. Left with no other allies, Oliver prepares to take on Chase by himself, but happens to be met by Malcolm Merlyn, who wants to take the fight to Chase, due to Thea’s capture. We’ve seen surprisingly little of Merlyn on this season of Arrow, likely because he’s been busy as part of the Legion of Doom on this past season of Legends of Tomorrow, but making him Oliver’s last resort against Chase was very inspired. It was especially great to have Merlyn often have to be the voice of reason for Oliver in this episode too, as Oliver once again sinks into his anti-social funk, only to have Merlyn tell him that he will always have people in his life, and it’s sad that a sociopath has to be the one to tell him that. You know that even this show’s characters are tired of this Oliver pity party when even the villains are telling him to smarten up!

We get even more extra help for the heroes’ climactic Season Five battle towards the end of the episode as well, after Chase inevitably breaks out of police custody, and steals a helicopter. After commandeering an aircraft in Utah, he then takes off straight to Lian Yu, the ultimate stage for Oliver’s final confrontation with him. Oliver calls in Nyssa to further assist him, creating a great callback to the animosity between Merlyn and Nyssa from earlier in the series, as they also head to Lian Yu, where Chase lays out Oliver’s allies as bait. This sets an excellent stage for next week’s season finale, one that will have the entirety of Arrow’s events so far coming full circle. The huge array of characters further highlights this, as almost all of the surviving characters from Arrow’s headlining roster stand ready for the final battle on Lian Yu next week! Better still is that Oliver calls upon one more ally upon landing on the island; Slade Wilson! Even Deathstroke will be temporarily taking Oliver’s side (hopefully) during next week’s season finale, and any and all Arrow fans will definitely be looking forward to the show’s two best big bads to date squaring off in battle!

The flashbacks also started to move towards a final climax in this episode to boot, as Kovar imprisons Oliver in the all-too-familiar jailing area of Lian Yu, infecting him with a drug that forces him to endlessly reflect on all of his suffering, both mental and physical. This was a great excuse to showcase an array of clips featuring just how much abuse Oliver has survived since he first washed up on Lian Yu a whole decade ago, which almost does break him, and drive him to suicide with a gun that Kovar gives him. The voice of Yao Fei, another welcome cameo (sadly, Shado only appears in stock footage), seems to spur Oliver to kill himself, but Laurel’s voice convinces him to press on, leading to Oliver using his one bullet to shoot his way out of the jail cell. We knew that Oliver obviously wouldn’t kill himself here, since these events happened five years before the show’s present-day events, but it was nonetheless fantastic to see Oliver directly conquer his demons, and prepare to face Kovar in one final struggle, one that effectively mirrors his impending final battle with Prometheus on the same island.

“Missing” did pretty much everything right in terms of setting up next week’s season finale for Arrow, and it’s tough to find any real issues with it at all! Even as Supergirl unfortunately appears to be sputtering at the finish line among The CW’s still-ongoing DC shows for this season, The Flash and Arrow are both currently shining stronger than ever in the lead-ins to their own season finales next week. Having so many characters violently come together in one ultimate clash should make for one of the most memorable and hopefully fantastic Arrow episodes of all next week, even if the past two episodes in particular will prove to be a tough act to follow. With so much buildup to an incredible climax though, I have faith that Arrow will deliver a battle for the ages, once Oliver and Chase face off in their ultimate duel.