Gotham still feels like it’s in a bit of rough terrain this week, though at least it managed to find a couple of creative ways to play against expectations, and offer some interesting drama. “All Will Be Judged” had to fall back on some familiar tropes in the quest to tweak some ongoing story developments for Season Three’s climax in a couple of weeks, but fortunately, some violent turns and unexpected surprises still kept the episode fairly entertaining.

A big part of this episode involved Gordon being found out by Kathryn as a traitor to the Court of Owls, after the somewhat short-sighted stunt he pulled last week, and in response, she sends Captain Barnes, operating under his new identity as, “The Executioner”, after him. Gordon somehow suspects that Kathryn isn’t on to him after he sabotaged her test run of the Alice Tetch virus though (seriously?), so after continuing to look into the Court’s operations, he briefly gets captured, and nearly killed by Barnes. Fortunately, Bullock and the GCPD manage to intervene before Gordon ends up on the wrong end of Barnes’ axe hand however. Yes, Barnes has an axe hand now. Because Gotham. 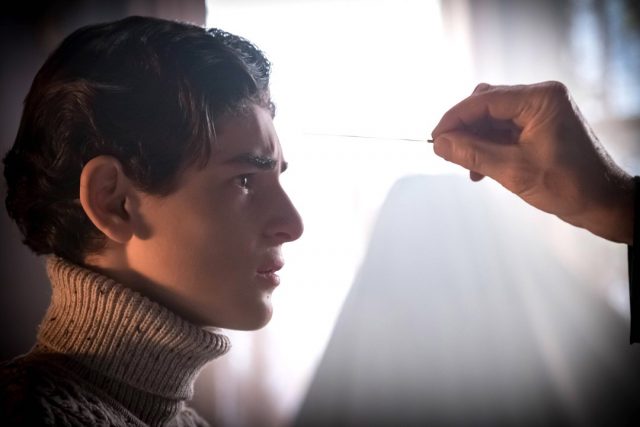 As exciting as it is to finally unleash Barnes fully against Gordon and the GCPD, this storyline mostly served as an excuse to start capping off the current developments with the Court of Owls, and with Kathryn. It seems like Gotham is thinking even bigger than them for the season’s endgame, along with a possible direction for Season Four’s premiere this Fall, as Kathryn ends up arrested, and confesses that she’s not actually the leader of the Court. In that case, who is actually behind this shadowy organization? Ra’s Al Ghul would be the obvious choice, especially since he’s already been cast for some point in the season’s remaining three episodes. It’s also true that Gotham wouldn’t necessarily have to follow DC Comics lore with the Court’s roster, if Ra’s is indeed made the leader for this show’s version of the Court, should that be the direction they go.

Whatever the case, this core storyline provided the most excitement in the episode, as Barnes attacks the GCPD precinct, right as Gordon and a distraught Alfred, who discovers after a violent encounter that the ‘Bruce’ at Wayne Manor is a fake in this episode, try to interrogate Kathryn. Alfred even stabs Kathryn through the hand to prove he’s not playing around, in one of several surprisingly violent moments that took place in this episode! That’s not the worst hurt that Kathryn suffers though, as she makes the mistake of telling Barnes to, “Stop his nonsense and get her out of there”, leading to Barnes brutally beheading her because she belittled his crusade. Yikes! While this was a really shocking and gleefully gory end for Kathryn, it is nonetheless deflated a bit by the fact that she went out like a coward and a chump, which is against her character. It just feels like the show no longer has any use for her, since it now wants to move away from the Court of Owls to start building towards another threat for Season Four.

Fortunately, another high point in the episode comes from Penguin and Nygma being forced to face each other, mere inches from one another, yet unable to kill each other because of their respective cages. After they torment each other and sabotage each other’s escape efforts, the two are eventually forced to realize that they need each other to escape and survive. After coming to a gentlemens’ agreement to help each other, and give each other a six-hour window before hunting down the other villain, we get a fun sequence of the two escaping, even if it does mostly take place off-screen after the initial jailbreak. Penguin and Nygma saying that they’ll see who the real villain is as they walk away from each other in the subsequent alley, preparing to return to their respective armies, is also pretty exciting, even if we’ll no doubt be waiting until Season Four to see this war properly erupt at this rate.

Bruce’s subplot, meanwhile, still feels like it’s plodding along at a snails’ pace, re-treading too much of the same old ground. The show is now trying to portray The Shaman as a Court member that actually wants to destroy the Court, which is kind of interesting, and is likely another window to bring Ra’s Al Ghul into the show soon, but this still comes back to the on-the-nose idea of trying to turn Bruce into Gotham City’s ‘protector’. I guess the show is starting to lay the foundation for Bruce’s transformation into Batman, in case FOX doesn’t give the showrunners as many seasons as they’d like to realize this journey, but turning Bruce into a mindless drone that will do The Shaman’s bidding by the end, after the memory of his parents’ murder is locked, feels kind of trite. The idea of Bruce rising above being a pawn in someone else’s game, especially when he inevitably re-purposes this attempt to use him so boldly as a catalyst toward his future Batman identity, has potential, but it really wasn’t taken anywhere interesting here, once again. 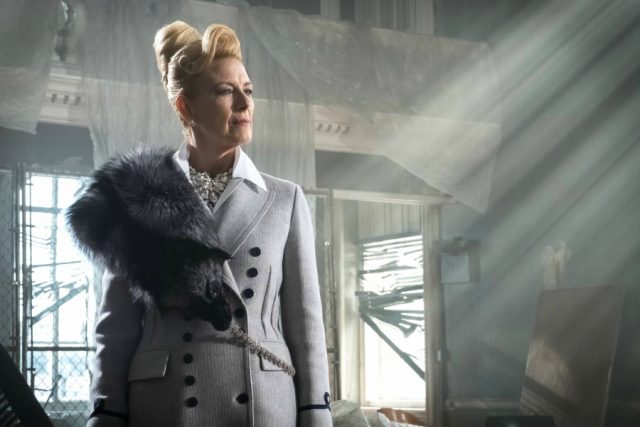 This just leaves Leslie as the subject of the remaining subplot, and unfortunately, she’s continuing to be annoying, unstable and irrational. Leslie even pays a visit to Jervis Tetch at Arkham Asylum, who basically spells out the bleeding obvious for her, namely that she’s the source of her own misery, and while he intentionally exploited that misery to hurt Gordon, the fault is still with Leslie. This motivates Leslie to break into the GCPD and steal the last remaining sample of the Alice Tetch virus, injecting herself with it as the episode ends. Leslie suddenly going full-blown psycho is a pretty huge leap, especially after the show already made this leap with Barbara, but considering that the showrunners promised a ‘proto-Harley Quinn’ for later in this season, which is rapidly running out of episodes now… Could Leslie be that proto-Harley? Making Leslie a Gordon-specific version of a Joker character is an interesting idea, one that sort of echoes the alternate Flashpoint timeline of the DC Universe in DC Comics lore, where Martha Wayne becomes The Joker and Thomas Wayne becomes Batman after Bruce is killed instead of his parents, but again, didn’t the show already try this with Barbara? I guess we just have to see where this goes.

“All Will Be Judged” gave us a good chunk of twisted fun on Gotham this week, especially with the surprisingly brutal way that Kathryn meets her end, but the show is taking a few leaps to get new story developments into place. Bruce suddenly becoming a mindless tool effectively makes him no better than his clone at this point, for example, while Leslie taking the Alice Tetch virus feels like an extreme and boneheaded overreaction, even if it might hopefully lead to a better storyline down the road. Barnes escaping custody and being at large in the end also feels inevitable, likely keeping him usable for Season Four, though at least the Penguin/Riddler escape proved pretty entertaining. The idea of an even larger threat than the Court of Owls waiting in the wings also carries some solid promise, even if we don’t really have that much time left before the season is over to explore that idea.

Gotham 3.19: "All Will Be Judged" Review
Gotham offered some decent, twisted fun this week, though it still fell back on old trite tricks, along with a few rather large story stretches.
THE GOOD STUFF
THE NOT-SO-GOOD STUFF
2017-05-22
74%Overall Score
Reader Rating: (0 Votes)
0%