NOTE: Some mild spoilers for the third season of, “Unbreakable Kimmy Schmidt” are present in this review. That said, the review is written to accommodate those who haven’t yet watched the season, and as such, will avoid discussion of major plot developments.

Unbreakable Kimmy Schmidt has often served as the defining sitcom standard for Netflix, alongside Aziz Ansari’s Master of None and animated sitcom, Bojack Horseman in its follow-up seasons. Unbreakable Kimmy Schmidt’s first two seasons were incredibly well-received, and both were genuinely superb in most respects as well, even if the second season occasionally went overboard with some of its weirder and more surreal elements. Fortunately, the show manages to return to a better balance between weirdness and heartfelt character in Season Three, which continues to have this series standing as one of Netflix’s very best original sitcoms!

Much of Season Three involves Kimmy trying to move forward in life, after facing her mother, and moving beyond the need for romantic gratification with Dong. Kimmy still has a passing love interest in Season Three, mind you, but the show more effectively treats her as an independent, free-spirited woman that’s pursuing her own professional desires in Season Three. It does this by having Kimmy want to attend Columbia University… To be a crossing guard. Yes, Kimmy has only evolved so much in this latest season of one of Netflix’s most beloved sitcoms, and fortunately, Ellie Kemper’s infectious smile and upbeat charm remains as appealing as ever in Season Three! 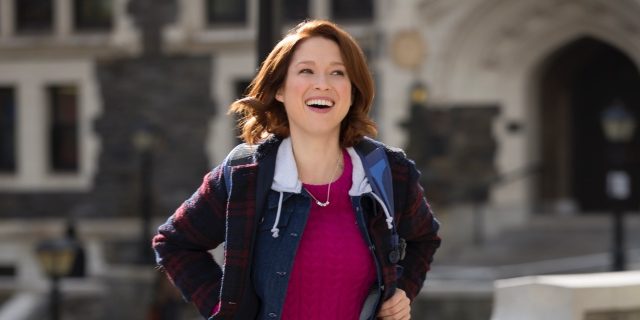 The show also marks some big personal shifts with its supporting cast as well, who pursue their own storylines with revised interpersonal relationships, shouldering more of the romantic storytelling than Kimmy does in Season Three. Titus, for example, decides to take a break from Mikey in a supposed quest for self-improvement, and that goes about as well as you would imagine it does. Lillian also breaks up with her insane boyfriend from Season Two, only to find another romantic interest when she undergoes an unexpected career change. Titus feels like he’s a little more in the background in Season Three, played more as gag fodder for any element of the season that doesn’t deal with Mikey, and that’s probably due to his especially heavy story emphasis with his alleged past lives in Season Two. Fortunately, Tituss Burgess still brings the laughs though, even when his storylines tend to have the smallest scale this season, despite Titus finding his own unexpected professional success to some extent.

It’s Jacqueline that actually ends up having one of the defining story arcs of Season Three, as she must deal with the selfish, abusive and bigoted family of her new boyfriend, Russ, a family that also happens to own the Washington Redskins. There’s an unexpected development with Russ that leads to some interesting conflicts for Jacqueline, especially since this allows her to also become more independent this season, while not completely sacrificing her wealth or influence. Jane Krakwoski doesn’t totally break character however, since, as with some of the things that never change in Kimmy, Jacqueline still serves as a great way to build the show’s weirdly specific ‘rich people’ lore, though it’s also Jacqueline that arrives at one of the most satisfying conclusions upon the end of the season. Much as Titus was often the most memorable character in Season Two, Jacqueline feels like the big highlight personality of Season Three, with Krakowski standing alongside Carol Kane as giving the supporting cast the ideal great personal development to go along with Kimmy’s core college journey in this latest offering for Unbreakable Kimmy Schmidt.

The college turn also serves as a great excuse to bring Xanthippe back to the show’s recurring ensemble, after she was disappointingly absent for most of Season Two. The Kimmy/Xan rivalry is a bit less petulant than it was at the start of the series, but it’s still very much present, as Kimmy’s oblivious can-do attitude proves a surprising hit at Columbia, forcing Xan to better re-evaluate her own set of values in life. Surprisingly, Xan never really interacts with Jacqueline all season either, though this isn’t such a bad thing, since Xan’s character doesn’t necessarily need Jacqueline to thrive. I’m just happy that she’s back in the picture, since all but eliminating her from Season Two is one of the most baffling decisions that this show made, and that’s considering some of the colossal weirdness that Season Two more liberally utilized in its own 13 episodes!

Season Three still gets very weird and quirky at times, but the weirdness is applied in a more effective and inspired way, crafting a better-balanced third season, so long as you’re not actively celebrating when this show becomes its most strange and surreal. Overall though, Unbreakable Kimmy Schmidt remains a clever and hilarious winner in Season Three, continuing to define the heights that any Netflix sitcom should reach for. The new professional and personal directions for the lead and recurring cast all generally work exceptionally well, especially with Xan properly returning to the ensemble this season. As usual though, the heart and soul of this series is Kimmy herself, who embarks on the next step of her personal journey in the modern world with glossy, optimistic aplomb. The show still isn’t quite as radiantly brilliant as it was in Season One in its latest batch of episodes, but it’s nonetheless still among the best original comedy seasons that Netflix has to offer!