There’s good news and a bit of bad news for HBO subscribers today, as HBO has announced that one of the premium channel’s most beloved sitcoms, the Emmy-winning Silicon Valley, has been renewed for a fifth season. This renewal announcement comes alongside confirmation of a renewal for HBO’s other most beloved sitcom, Veep, which is now set to return for a seventh season. Both shows will debut their new seasons in 2018, likely within their usual Spring slots. 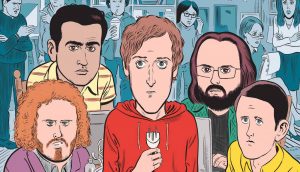 There is some bad news that comes with confirmation of Silicon Valley’s return however, namely that one of the series’ lead stars, T.J. Miller, who portrays tech ‘incubator’, Erlich Bachman on the show, will not return for Season Five. This was a mutual decision reached by Miller and the show’s lead producers, and while an exact explanation for Miller’s departure from the series wasn’t given, it’s no doubt because of Miller’s increasingly busy film career. In 2018, the actor is set to appear in sci-fi novel adaptation, Ready Player One, disaster thriller, Underwater, and has a voice contract option for Dreamworks Animation’s upcoming sequel, How To Train Your Dragon 3, which is scheduled to release in 2019, and will likely require Miller to do voice acting work next year. While not yet confirmed, Miller is also rumoured to reprise his role as Weasel in Deadpool 2 next year as well.

Aside from Miller, Silicon Valley also currently stars Thomas Middleditch, Kumail Nanjiani, Martin Starr, Zach Woods, Josh Brener, Amanda Crew, and Suzanne Cryer. Created by Mike Judge, who executive produces the series with Alec Berg, Silicon Valley is a half-hour comedy series surrounding a body of young entrepreneurs trying to crack success in the tech-driven California city of Silicon Valley. The series is loosely adapted from Judge’s own younger experiences living and working at a startup in Silicon Valley, before he went on to create beloved comedy offerings such as the movie, Office Space, and TV shows, Beavis & Butthead and King of the Hill.

Keep booting up Eggplante for all major news and updates on Silicon Valley.