With the Tetch Virus now fully unleashed on Gotham City, plenty is going down across the two-episode season finale event for Gotham this week. The first of the two season finale episodes, “Destiny Calling”, presents a good deal of excitement, as Gordon must try to resist the dark urges of the virus, while the city at large falls into chaos. On top of that, a brainwashed Bruce continues to be called to an unknown destiny by a mysterious individual, leading Alfred into a hefty batch of trouble.

As usual for climactic Gotham episodes, this episode got very busy, very quickly. For the most part, the episode was also fairly thrilling too, even if some story turns did feel pretty blatantly contrived. It also felt like a few characters ended up lost in the chaos, most notably Leslie and Barbara, who seem to be conspiring on the sidelines for now, while Penguin and Fish Mooney properly get to work on seizing the city, after they exploit Hugo Strange to develop a cure that will help the citizens shake the Tetch Virus.

Watching Gordon have to fight against the virus throughout the episode made for a standout device that continually generated excitement, as the GCPD once again find themselves completely in over their heads. Bullock having to tag along with an increasingly unhinged Gordon also provided a good way to keep viewers on their toes, especially when he has no choice but to arm and unleash Gordon on the out-of-control citizens and villains currently plaguing the city after the virus attack. Fortunately, Gordon does manage to resist the virus well enough for most of the episode, even if he’s just unstable enough to create some legitimate worry.

That said though, there are a few story stretches that come by way of Gordon conveniently lapsing from his senses whenever the story needs a hand when it comes to moving along. The biggest of these comes when Gordon and Bullock finally manage to track down Fish, Strange and Penguin, who inexplicably have Mr. Freeze and Firefly on their side again (and yet no Ivy or Selina?), just in time for our first look at the Gotham universe’s take on the League of Assassins, who appear to be going by their Batman Begins moniker, the League of Shadows in this case.

This should be an exciting occasion, and does at least lend itself to a solid action scene, but honestly, the League makes a pretty dumb first impression here. Mr. Freeze and Firefly manage to take out several League members without hassle, while only a couple of Fish’s nameless red shirts are ultimately killed. Gordon even manages to take out the remaining League forces by himself, which, even under the influence of the Tetch Virus, makes the League look like a bunch of lightweights. There’s no way that Gordon should be able to take out that many League assassins and not suffer a scratch, virus or no! Moreover, Gordon suddenly ending his rampage by randomly stabbing Fish Mooney, who suddenly falls to the ground and dies, is done with a laughable lack of ceremony. Fish already ‘died’ at the end of Season One, so this big moment for Penguin is treated with a shrug, since the show has already gone down this path. Who really cares about the fact that Fish is dead then? It seems like not even the show itself cares!

Fortunately, the subplot with Bruce and Alfred was also pretty good at keeping viewers on the edge of their seat, even if it suffered through a contrivance or two of its own. Since Gordon and Bullock have their hands full trying to keep Gotham City under control, Alfred is left in charge of Bruce in the interrogation room, only to leave him so that he can inexplicably go see what the rest of the GCPD are doing. Again, this is way too contrived and out-of-character for Alfred. There’s no way he would ever let Bruce out of his sight in this situation! It just serves as a convenient excuse to simply have Bruce escape (the idiot cops didn’t even think to handcuff him?!), so that Alfred can go chasing him to his mysterious ‘destiny’. 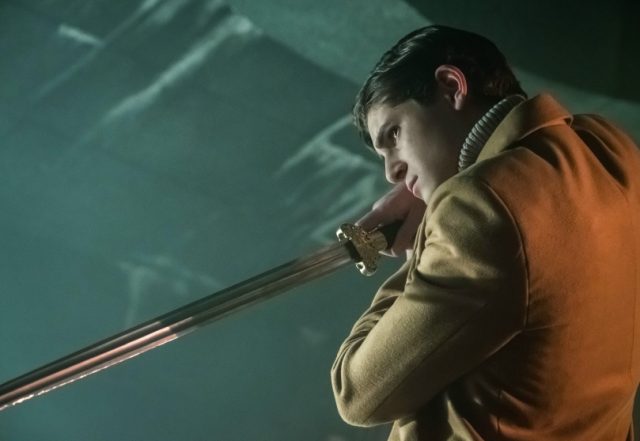 This moment with Bruce and Alfred serves as the climax of the episode, since it’s here where we finally get our first introduction to the Gotham universe’s portrayal of DC Comics villain and frequent Batman nemesis, Ra’s Al Ghul. Ra’s Al Ghul is much more theatrical and openly evil in this case, a far cry from his more subtle and devious former live-action portrayals in Batman Begins and The CW’s Arrow, and inevitably, it’s not long before his forces capture Alfred and bring him before Bruce. Bruce is told to stab Alfred dead so that he can realize his destiny, and surprisingly, he actually does! The episode ends with Bruce seemingly taking Alfred’s life, which is enough to snap him out of his brainwashing. Of course, there’s a Lazarus Pit conveniently placed right in the room though, so I doubt that Alfred’s death is going to last long.

“Destiny Calling” does its job well enough as one of this week’s season finale episodes for Gotham, even if the show still has to strain to get some of its necessary story resolutions realized. There was really no easy way to get rid of Fish Mooney for good, after she’s already ‘died’ earlier in the series, but even then, her death was frustratingly pathetic. The GCPD negligently letting Bruce escape, so he can go meet Ra’s Al Ghul and kill Alfred, also felt way too easy. Still, the virus-infected Gordon having to resist his violent urges, and Bruce actually doing the unthinkable in the name of his so-called destiny, at least provided some great defining moments for this episode. The villains were also pretty entertaining as well, though I do hope that more is done with Leslie’s own virus infection soon. I also hope that the League of Shadows becomes a little more threatening in the season’s one remaining episode!

Gotham 3.21: "Destiny Calling" Review
This week's first of two season finale episodes for Gotham offers plenty of exciting moments, even if it has to contrive quite a few story resolutions.
THE GOOD STUFF
THE NOT-SO-GOOD STUFF
2017-06-06
74%Overall Score
Reader Rating: (0 Votes)
0%