Another classic race of Doctor Who antagonists returned to the series this week, in a fairly conservative, but still enjoyable mystery. “Empress of Mars” is yet another Series Ten episode that begins with a pretty strong hook, as The Doctor, Bill and Nardole take a trip to NASA, where it’s discovered that a message, “God Save the Queen” is spelled out in stones on Mars’ surface. Turns out, for some bizarre reason, Victorian soldiers ended up on the surface of Mars in the 1800’s, forcing The Doctor’s crew to investigate.

The best part about this week’s Doctor Who episode is of course the latest return by the Ice Warriors, a well-established alien race from the days of Classic Who that’s seen surprisingly few appearances in New Who. In fact, beyond a cameo by one during Series Nine’s, “Face the Raven”, the only other New Who appearance that the race has made is in Series Seven episode, “Cold War”, and that was still only one of them! Here, we get a proper storyline surrounding the entire Ice Warrior race, complete with them being slightly tweaked from their design in, “Cold War” to better resemble their original appearance from Classic Who. 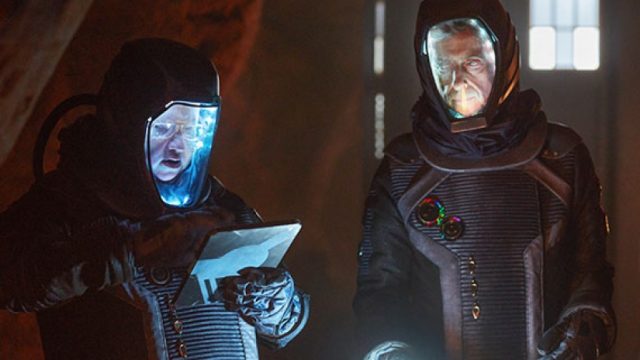 Like I said though, the downside to finally putting a whole group of Ice Warriors front and center in a New Who storyline in this case, is that it doesn’t really aim that high when it comes to being memorable. Disappointingly, this does feel like a bit of a filler episode for Series Ten, since it deals with a self-contained conflict that hits a lot of familiar beats for this show, and seems to largely exist to set up Ice Warrior appearances for the series’ future, rather than properly deliver a superb and highly memorable Ice Warrior storyline in this episode proper. This certainly isn’t a bad episode nonetheless, but it feels like the calm before the storm, as the season’s final three episodes present a likely buildup of intensity before the season’s climax at the turn of the month.

So what’s going on with the Victorian soldiers on Mars? Well, it turns out that they were marching around South Africa, and discovered a lost Ice Warrior, complete with a functional spaceship. After helping fix the Ice Warrior up, they’re taken to Mars, with the Ice Warrior discovering for the first time that his race has slept for longer than anticipated, and the planet is now dead and lifeless. Nonetheless, the Ice Warrior, who the soldiers have affectionately nicknamed, “Friday”, promises them riches in return for helping them. The Doctor however naturally deduces that this could be a trap, especially when the, “Riches” seem to be laid amidst a sarcophagus for an Ice Queen that’s smack in the middle of an Ice Warrior hive! 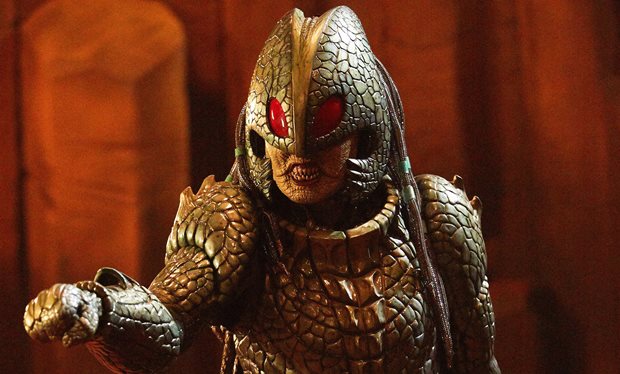 You can probably imagine what happens next. Inevitably, one of the idiot soldiers tries to loot the sarcophagus, which wakes up the Ice Queen, Empress Iraxxa, and then Iraxxa decides that the British soldiers need to die. There’s a bit of a fight (which is actually pretty impressively action-packed for Doctor Who standards!), while The Doctor and Bill are imprisoned with a soldier that survived a hanging for desertion, and then the formerly cowardly soldier displays enough honour and courage to get the Ice Warriors to stand down. That’s literally every noteworthy event that happens in this episode. Considering that this is the proper return of the entire Ice Warrior race in New Who, that’s kind of a let-down. This is especially true when you see that the show is yet again contriving an excuse to remove Nardole from this week’s mystery and subsequent action, as the TARDIS inexplicably warps him back to the vault. What the hell? Why did that happen?!

Basically, this is a Deus Ex Machina so that Nardole is forced to turn to Missy to bring The Doctor and Bill back to Earth. Missy having free reign in the TARDIS, and being surprisingly benign about it, was a great turn, but it felt awkwardly shoved into the end of the episode, so it didn’t ultimately have much impact. The Doctor and Bill helping the human ambassador to the Ice Warriors construct the, “God Save the Queen” message for an assistance ship, which will bring the Ice Warriors to a new world, was at least a nice, if also predictable touch to end the episode on though. Fans of Classic Who even got a pretty cool cameo by Alpha Centauri around here, who is an alien in this universe, rather than just a star system. Remember Alpha Centauri? Yeah, probably not if you’re not a super die-hard Doctor Who fan, but the cameo is cool nonetheless. 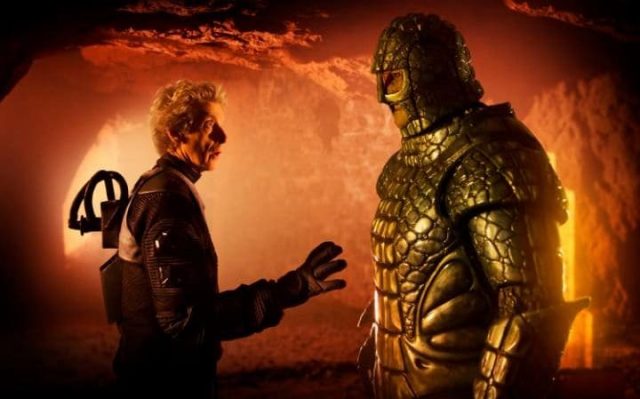 “Empress of Mars” pretty much amounts to business as usual for Doctor Who this week, though I suppose that’s not all bad, considering the grand three-episode Monks conflict that unfolded over the past few weeks. Getting a breather felt at least a bit welcome, even though it was annoying to yet again have Nardole sitting out an adventure with The Doctor and Bill. It is however very assuring to know that New Who still hasn’t forgotten about the Ice Warriors, and at least seems to be setting up for bigger and better episodes with them in the future. Some fans may be disappointed that the race’s biggest turn yet in New Who ultimately lacked much fanfare though, especially as this episode doesn’t seem to have anything to do with the season’s larger canon or progression. We’ll have to see if next week’s episode amps things up a bit, but we should nonetheless savour these last few adventures with the Twelfth Doctor. As we know, he won’t be around much longer.

Doctor Who 10.9: "Empress of Mars" Review
Doctor Who delivered a conservative, but fairly enjoyable return for the Ice Warriors this week, as The Doctor and Bill make a trip to Mars.
THE GOOD STUFF
THE NOT-SO-GOOD STUFF
2017-06-11
80%Overall Score
Reader Rating: (0 Votes)
0%