Ori and the Blind Forest remains one of Microsoft’s most beautiful and touching small-scale adventures in recent years, and as revealed at today’s Xbox keynote, it will be receiving a follow-up in the near future! Ori and the Will of the Wisps will succeed 2015’s much-beloved Metroidvania game, with the game being unveiled amid a live piano score. 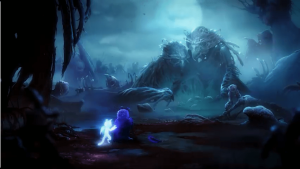 Not much is known about Ori and the Will of the Wisps as of yet, but the imagery shown in a reveal trailer does seem to call back to a style retained from the original experience. The previous game’s Metroidvania gameplay is likely intact for the follow-up, though sadly, no other details were divulged. A release window for the game is also currently unknown, though the game appears to be coming to Xbox One and Windows 10 as a Play Anywhere title, granting both versions together with a purchase of either. The Xbox One version will also see presentation upgrades when played on an Xbox One X.

Keep enchanting Eggplante for all major news and updates on Ori.