After a series of delays, a release is finally in sight for Microsoft’s 1930’s cartoon-inspired run-and-gun game, Cuphead. Microsoft announced during today’s Xbox keynote that Cuphead will release for Xbox One and Windows 10 PC’s on September 29th. As previously promised, the game will be a Play Anywhere title as well, so purchasing either version will score you the opposite version free of charge. The Xbox One version will also offer presentation enhancements on Xbox One X. 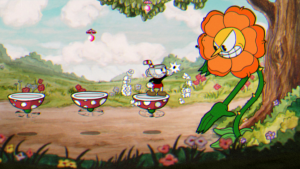 Cuphead is being developed by Studio MDHR, a developer founded by Canadian brothers, Chad and Jared Moldenhauer. Players face an onslaught of enemies and over-the-top bosses in a bid to help protagonist, Cuphead repay a debt to the devil. The game supports two-player co-op as well, with a second player able to control secondary protagonist, Mughead to assist in combat.

Keep scooping up Eggplante for all major news and updates on Cuphead.