Fear the Walking Dead slowed things down considerably this week, though not necessarily in a bad way. “TEOTWAWKI” was all about world-building and getting the Clark family settled into the Ottos’ Broke Jaw Ranch, while also checking in with Strand as he makes contact with an old acquaintance. The episode was a bit slow-paced, and there were a couple of story annoyances here and there, but for the most part, this week’s offering was a good chance to take stock of why the Clark family is starting to go down such a dark path, especially when they seemed to have a huge, sudden uptick in fighting and survival skills when the season started.

We’re only just starting to get to know Jeremiah Otto, the patriarch of the ranch and father of Jake and Troy, but it was interesting to see how much his own past issues line up with Madison’s. Jeremiah had an alcoholic wife that ended up dying from her addiction, just as Madison struggled with an alcoholic father, and a husband who died in an accident. I still get the feeling that Madison and Jeremiah will ultimately become foes in the future, but seeing Madison start thinking about settling in at the ranch was great, as she tries to find a new community in the wake of losing Travis. 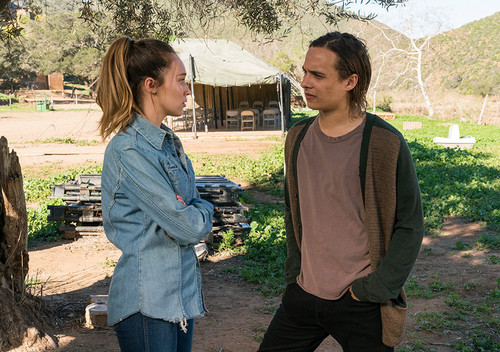 Alicia and Nick also found new friends this week, though this worked better on one end as opposed to the other. Alicia meeting some teenagers around her age, and hanging out at a ‘bible study’ that turned out to be a pot-smoking den, was a pretty solid character moment, especially since these other teenagers haven’t really been outside of the ranch. Alicia, by contrast, has had to go to some dark places in the name of survival, and recounting some of those feelings to the other teens, along with a Walker head in a bird cage that the teens have called, “Jeff”, was a great moment of honesty for her character, as she must also struggle with the idea of whether the Broke Jaw Ranch is truly the right home for her in the Walker apocalypse.

Nick, meanwhile, is torn between Madison and Luciana in terms of what his next move is. The other ranch citizens are naturally suspicious and resentful of the Clark family, though some of this did feel a little forced. I get that a daughter was lost, but Madison lost a fiance too, so why does her loss not matter? Blaming Madison’s family for the actions of a random attack that they had no control over, when the ranch knows full well that Troy conducts ‘studies’ off the grounds and that the helicopter would have been attacked either way (somehow), just didn’t make sense, and calling her a freeloader before she and her family even have a chance to settle in makes even less sense. Jeremiah tries to explain this away by claiming that the ranch people just don’t like people that they don’t know, but this feels like a lame explanation. It’s as if the show is already bracing for a fight between the Clark family and the ranch, and doesn’t want the Clark family to look like they’re truly in the wrong.

On this note, I’m not quite grasping why Luciana wants to bail, which also feels pretty forced as far as drama goes. I get that she’s in unfamiliar territory, but why in the world is it a better idea to go wander around aimlessly in the wild, where anyone and anything can kill you at a moment’s notice? Fear the Walking Dead has started to shed its rushed, hasty character contrivances for the most part, but I really hope that they don’t start coming back this season, especially when the season started off so well last week. Nick falling in with Troy most notably seems to suggest that the two are going to bond over their mutual feelings of being violent outcasts, and we’ll have to see where this goes. Nick suddenly seeming to buddy up to Troy after what happened in the season premiere feels pretty unrealistic, but maybe the show will go somewhere interesting with this, so I’ll give it some time to gel.

As for the subplot with Strand, it was generally pretty good, even if the payoff at the end of the episode was probably the best part about it. Strand meets up with a former friend, Dante, who also knew Strand’s late husband, Thomas, and to start, it seems like Strand has a new place to call home. Unfortunately though, Dante isn’t very friendly, dangling Strand over a pile of Walkers at the bottom of a dam as an intimidation tactic! Strand is allowed to live, but he’ll have to earn his keep, leading to him being thrown in jail. Strand is handed a canteen of water though, and the one providing it happens to be none other than Daniel Salazar! Finally, Daniel has returned to the show, after his ambiguous fate midway through last season. Ofelia is still MIA for the time being, but catching up with Daniel is overdue, and I’m glad that next week’s episode looks like it’s going to fill in the blanks regarding what Daniel has been doing since surviving that fire, especially since the showrunners have confirmed that this is not a hallucination, and it is indeed the real Daniel! 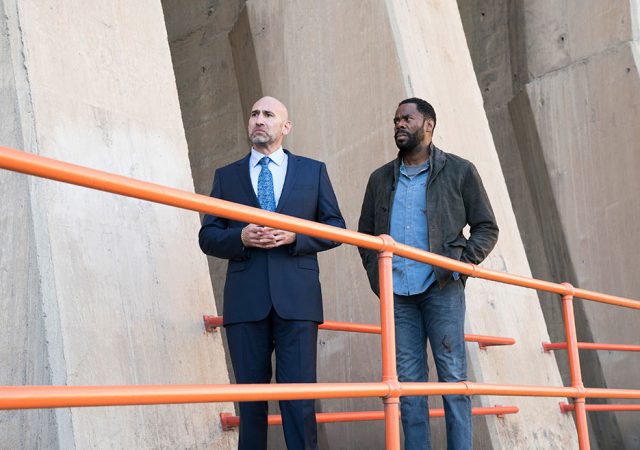 “TEOTWAKI” sometimes felt a bit sluggish, and not every story turn made sense, but the show still mostly capitalized on the chance to develop the Clark family’s new camp pretty well. The new character dynamics for Madison, Alicia and Strand all look to be pretty promising, even if Nick’s newfound bond with Troy seems to be a little more of a stretch for now. Like I said, I hope that Fear the Walking Dead doesn’t fall back on its old habit of contriving rushed story arcs for the sake of creating unrealistic drama, as it did during its humble beginnings especially, but so far, our time at Broke Jaw is at least satisfying in terms of the character interactions. It’s also very satisfying to finally have Daniel returning to the show, even if we still don’t have an update on Ofelia. Maybe that will change next week, but either way, pairing up Strand and Daniel in an ongoing subplot could be very interesting, especially since we don’t yet know if Daniel is going to be taking good care of Strand or not!