Marvel vs. Capcom: Infinite appears to be proceeding smoothly through development, with the game making another appearance at Sony’s E3 press conference tonight. Along with debuting some new cinematic footage, the new trailer for the game confirmed eight new playable characters, between returning veterans, Doctor Strange, Thanos and Nova on Marvel’s end, and Dante, Zero, Nathan Spencer and Arthur on Capcom’s end, with Marvel’s Gamora also joining the game’s roster in her Capcom vs. franchise debut! 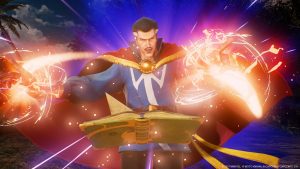 Along with confirming the news of several new personalities, Capcom also announced that a special standalone demo for Marvel vs. Capcom: Infinite is being released on PlayStation 4 and Xbox One tonight! Disappointingly, it appears that the demo won’t be offered on PC. Regardless, the Marvel vs. Capcom: Infinite demo will provide an early peek at the game’s Story Mode, which will feature the Marvel Universe and the universes of various Capcom franchises quite literally coming together, as two of their most dangerous villains, Marvel’s Ultron and Mega Man X’s Sigma, merge together to create the dangerous new foe, Ultron Sigma! Unfolding across merged arenas like Knowmoon, which combines Guardians of the Galaxy base, Knowhere with Strider’s third moon, and Xgard, which combines Thor’s homeland, Asgard with Mega Man X’s Abel City, the personalities of Marvel and Capcom must trust the power of the Infinity Gems to stop Ultron Sigma, but doing so also means entrusting their fates to the mad titan, Thanos, another of the most dangerous threats to exist in the Marvel Universe!

Marvel vs. Capcom: Infinite will release in North America and Europe on September 19th of this year, for PlayStation 4, Xbox One and PC.

Keep powering up Eggplante for all major news and updates on Marvel vs. Capcom.