Doctor Who has enjoyed a fairly good Series Ten, though if there’s been one particular problem with this season, it’s the fact that the story concepts are often better than their execution. While some especially cool and creative storylines have been featured throughout Series Ten, their resolutions in particular have been left wanting, with last week’s, “World Enough and Time” at least proving to be a season-defining highlight. Disappointingly though, Doctor Who fell back into this season’s annoying old habits with this week’s season finale, “The Doctor Falls”, which is a mostly decent episode, but definitely doesn’t live up to the promise of its title.

The biggest issue with this episode in fact is that the title doesn’t ultimately follow through. For all of the touting of The Doctor’s regeneration and/or destruction, neither ultimately happens. Instead, the show forces an annoying regeneration fake-out that has Peter Capaldi’s Twelfth Doctor ultimately resisting his regeneration (since when can he do that?!), and childishly refusing to change, and that’s after apparently killing himself to save the day. Needless to say, the way that Series Ten ends is frustratingly sloppy when it comes to The Doctor’s resolution in particular, even if we do at least get a decent tease for this year’s Christmas special in December, where The Doctor will presumably finally regenerate into his thirteenth incarnation. 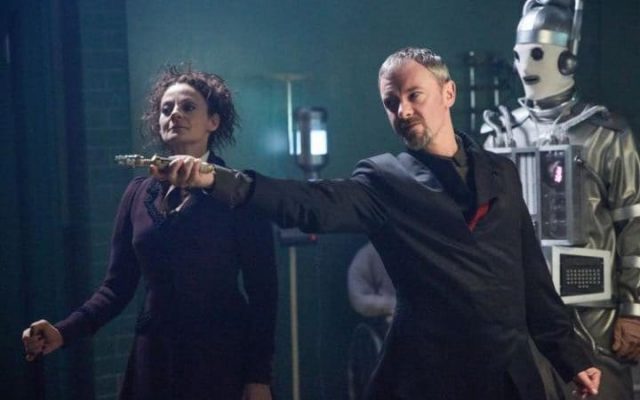 So, what ultimately does happen in this episode? As usual, it begins with a pretty strong hook, as another layer of the massive Mondasian colony ship, the one pretty deeply sunk into the black hole, lives peacefully in a simulated countryside, occasionally fending off the Cyberman ‘scarecrows’ that come after their children. Eventually, after a brief scuffle between The Doctor, Missy and The Master, during which Nardole secures an escape route, the Cyberman-converted Bill takes The Doctor to the simulated countryside settlement to be nursed back to health, while she ends up in isolation, not initially realizing that she is now a Cyberman.

Fortunately, if there was one character that was pretty much entirely done right in this season finale, it was Bill. The device of having the human Bill appear in scenes where others react to her being a Cyberman, with Bill only realizing the horrible truth when she’s given a mirror that shows exactly what she’s become, worked very well, and provided an effectively heavy air of tragedy for this seemingly short-lived companion. Bill being ready to stand with The Doctor in a gesture of sacrifice when his ultimate plan is put together felt surprisingly fitting as well, even as Nardole is instead urged off to go look after the colonists, in another apparent exit for one of the Twelfth Doctor’s companions.

It’s a bit unusual to have the show seemingly already getting rid of both of the current Doctor companions after just one season, but at least their alleged exits felt fitting and nicely memorable. The surprise return of The Pilot as a means of resurrecting both Bill and The Doctor was a nice touch at the end, as Bill is re-purposed into another Pilot form, and The Doctor is returned to life after detonating a massive explosion that (somehow) doesn’t vaporize him, yet takes out most of the attacking Cybermen. Sure, it’s yet another transparent Deus Ex Machina in a Doctor Who season that’s been frustratingly full of transparent Deus Ex Machinas, but at least this provided an emotional and romantic way to restore Bill at least somewhat to her normal form. The show also somewhat implies that Bill could be back as a companion of the Thirteenth Doctor as well, since the writers don’t seem to be completely sure if that’s what they want to do yet, as The Pilot conspicuously brings up that returning Bill to human form isn’t difficult (and yet, she can’t return herself to fully human form?), and Bill seems concerned about leaving The Doctor alone for too long. I guess we’ll have to wait and see, even if it seems like Nardole is pretty definitively leaving the show here.

As for Missy and The Master, they at least provided a good air of menace to the episode, having some great standout creepy scenes together. Disappointingly though, their big team-up ended up being pretty mixed in the end. The two do some damage, and The Doctor rigging the initial wave of Cybermen to come after Time Lords instead of humans as a way of forcing them to retreat is inspired, but beyond contributing to some fairly cool action scenes, at least for Doctor Who standards, it felt like the way that both Michelle Gomez and John Simm ultimately left the show (for the second time in Simm’s case), was a little cheap and forced.

Missy stabbing The Master and being responsible for his regeneration into her was a fairly neat twist, though The Master somehow using his Sonic Screwdriver to use some sort of convenient bullshit ray to immediately nullify all of Missy’s transformations and kill her/himself felt really bizarre and contrived. I get that The Master doesn’t like the idea of ‘going good’, but would he really ensure his own destruction when he clearly sees that Missy hasn’t completely turned over a new leaf? I doubt that this is the last we’ve seen of The Master on Doctor Who, who is way too iconic and important a foe to The Doctor to just scrap, though I’m not sure why Missy couldn’t just get away with an injury and regenerate off-screen.

We at least got plenty of drama and spectacle to elevate, “The Doctor Falls” well enough, even if not all of it is successful. The season had already started going too far with the regeneration fake-outs at this point most notably, which somehow got even worse here. The Doctor ultimately suppressing his regeneration for the Christmas special is rather annoying, even if the spiritual return of the First Doctor, now played by David Bradley in succession of the late William Hartnell, was an interesting way to end the episode, and one that also fits with the frequent callbacks to the First Doctor’s 1960’s-era run throughout this season.

Fortunately, Bill and Nardole were given fitting exits here at the very least, even if Bill’s exit may not permanently stick, and while Missy’s death felt a bit too contrived, the way that The Master is forced to regenerate into her is at least a cool way to bridge the two major Master incarnations’ story arcs for New Who, even with Missy being strangely absent throughout the Eleventh Doctor’s entire run. If nothing else though, we did get an explosive confrontation with an army of Cybermen as an exciting note to close Series Ten out on, as well as a pretty interesting hook for the Christmas special at the end of this year. Still, it’s too bad that the Twelfth Doctor’s final season ended on a bit of a mixed note, considering that he’s often been one of New Who’s best Doctor incarnations.

Doctor Who 10.12: "The Doctor Falls" Review
Doctor Who delivers a mostly decent season finale with a few annoying flaws this week, as many big characters get dramatic exits, though not all of them feel rewarding.
THE GOOD STUFF
THE NOT-SO-GOOD STUFF
2017-07-03
76%Overall Score
Reader Rating: (0 Votes)
0%