NOTE: Spoilers from throughout the fourth season of, “Silicon Valley” are present in this review

Season Four of Silicon Valley attempted to present some interesting character shifts with this beloved HBO sitcom’s established ensemble. Over the course of this season, Gavin Belson became an unexpected ally, Pied Piper became better and stronger than ever, and Richard found himself on the verge of the a century-defining technological breakthrough, one that initially threatens to corrupt his principles. This all came amid the same reliable batch of great laughs and charming character work, allowing Silicon Valley to stay strong, and feel especially fresh, throughout its latest season.

The front half of the season did have to suffer through a few annoying story pivots, mind you, especially since Monica’s firing from Raviga at the end of Season Three had to be rather clumsily retconned out, placing her back at the firm with Laurie, so that the two women could start a new investment firm together, Bream-Hall. This didn’t end up dragging down the season for long, but it did feel like the writers had certain ideas for Season Four of Silicon Valley, then later decided that they had certain better ideas, so they had to get rid of their old ideas without an effective sense of cohesion. This was also evident with the Gavin/Jack partnership at Hooli, which quickly saw Jack fully taking over the company, as Gavin is quickly fired, and forced into a downward spiral that brings him into an unlikely partnership with Richard. 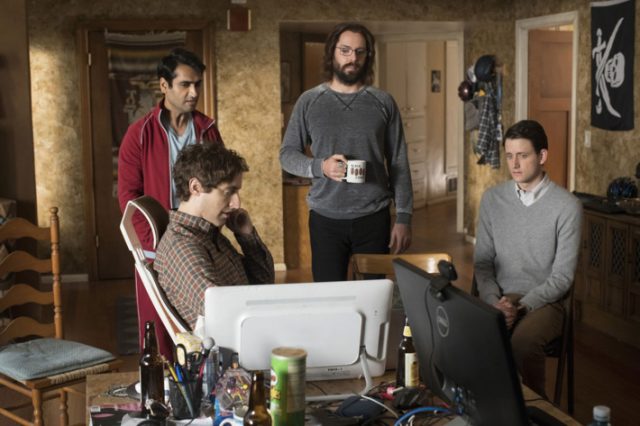 Still, even though the season’s first couple of episodes in particular suffered through frustratingly short-lived scenarios that didn’t ultimately live up to their promise, this show’s latest batch of ten episodes never faltered when it came to the laughs. Especially memorable gags were all throughout every episode this season, between crazy peeks into Gavin’s personal life (where he even gets blood from an attractive young man transfused into him to allegedly retard the aging process!), Dinesh both dating a vengeful hacker that he screws over, and very briefly becoming CEO of Pied Piper before he disgraces himself and gets demoted again, Jian-Yang becoming an unlikely success in the app market after some quick thinking from Erlich, and best of all, Big Head once again shrugging his way into a lucrative job, as he somehow becomes a professor at Stanford. We didn’t see too much of Big Head in Season Four’s latter half especially, but his appearances definitely counted for a lot, as the Pied Piper crew found several creative ways to interrupt the Stanford ecosystem, which Big Head never seemed to suffer for.

As much as the show tried some interesting new ideas and directions in Season Four though, it also had some interesting callbacks to Season One, most notably with the return of Dan Melcher. Melcher ended up becoming the main guinea pig to Richard’s new internet idea, which becomes even more complicated when Richard ends up seduced by Melcher’s wife, in a hilarious throwback to Erlich’s transgression against Melcher during Techcrunch Disrupt several years ago. Richard gradually ‘broke bad’ more than ever towards the end of the season as well, whereupon he completely throws out his moral compass and sense of legality to both launch his new internet and stick it to Hooli, which almost destroys Pied Piper in the process. Fortunately though, Richard does come to his senses in the eleventh hour, which is enough time for a juvenile prank by Gilfoyle against Jian-Yang to surprisingly save the day, even if Richard nonetheless gets a beatdown from Melcher after he learns how his latest marriage effort got wrecked.

Another especially noteworthy element in Silicon Valley’s fourth season is Erlich being written out of the show, as T.J. Miller has opted not to return for this show’s confirmed fifth season next year. Erlich is unceremoniously shuffled off, complete with Jian-Yang literally tossing his luggage out and speeding off at the airport, before Erlich gets a chance to have some fun with Gavin, who is attempting a spiritual quest in Tibet. The Erlich/Gavin interactions are quite funny, though Gavin simply dumping a stoned Erlich at some Tibetan man’s house felt like an excessively unremarkable way to write the character out of the show. As I said during my proper episode reviews for this season, I’m sure that Miller will at least be back for a series finale, whenever HBO decides to end this series, but at this point, it really does feel like Silicon Valley will be fine without him, especially when the newly-rich and newly-empowered Jian-Yang could very easily take his place in the Pied Piper ensemble next season.

Despite one of the lead characters making an exit here, it feels like things will more noticeably go back to business as usual next season as well. Richard makes an enemy out of Gavin again in the season finale’s final minutes, right after Gavin boots Jack out and regains control of Hooli, after Jack invests in some disastrous VR technology by eccentric wunderkind, Keenan Feldspar, played in a standout guest role by Haley Joel Osment in the season’s latter stretch. Not only that, but Bream-Hall looks like they can just as easily replace Raviga on thiz series, just as Jian-Yang looks to be able to fairly easily replace Erlich, going forward. It was however a comforting switch to have Pied Piper end the season on a win for a change though, something that they haven’t really had since the conclusion of Season One, at least not without any sense of anxiety. I doubt that the company’s troubles will end in Season Five next year, especially with Gavin now back on top at Hooli, but overall, it was refreshing to see Pied Piper ending this year’s episodes without any sense of defeat or uncertainty. It feels pretty well-earned, four years into this show.

Thus, Season Four of Silicon Valley offers a standout mix between old and new, bringing various storylines to uncharted territory, while being careful not to completely disturb the foundation of what makes this show special. Temporarily removing Hooli as an obstacle allowed Pied Piper to take on new and memorable challenges, especially when Richard’s own hubris ended up becoming the company’s greatest threat for the season’s climax. The beginning of the season may have been a bit awkward, and Erlich’s exit ultimately felt pretty underwhelming, but those are very petty gripes in what nonetheless remains one of the best sitcoms on television right now, on premium cable or otherwise. Just as Pied Piper ends the year with more strength, conviction and resources than ever, so too does Silicon Valley feel fresher and bolder than ever by the end of its fourth season, proving in an inspired way that the more things change for Pied Piper’s eccentric crew, the more they stay the same.