NOTE: Some minor spoilers for the first season of, “Castlevania” may be present in this review. That said, the review is written to accommodate those who have not yet watched the series, and as such, will avoid discussion of major plot developments.

Netflix has begun to take on a pretty large variety of original television programming, from globetrotting action and fantasy, to down-to-earth sitcoms, to animated adventures, to sweeping political dramas, and even Marvel Cinematic Universe expansions. One frontier that formerly had yet to be explored by the streaming giant’s original television slate however was video game adaptations, and that frontier has now been conquered as well, due to the release of the first season of Castlevania, inspired by Konami’s highly beloved demon-hunting action game series.

The very existence of Netflix’s Castlevania series was only made known a scant few months ago, with the project seeming to be top secret for the increasingly erratic Konami and the usually tight-lipped Netflix. Now that it’s finally arrived, it also feels like we’re merely getting a proof of concept, rather than a fully-realized television show, since Castlevania’s first ‘season’ merely spans a tiny four episodes, with each barely clocking in at just over twenty minutes. This makes Castlevania’s debut on Netflix feel more like a chunked up movie than a true television season, and there’s bound to be many Castlevania fans and general interested Netflix subscribers that will be frustrated by the fact that you can get through this entire season in under two hours. 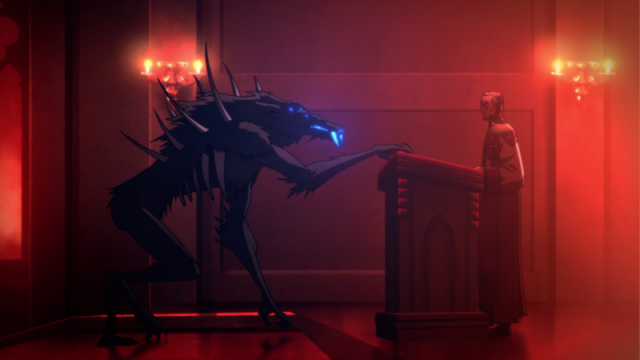 That said however, it’s very uplifting to see that Castlevania manages to be a rare example of a video game adaptation that genuinely succeeds at virtually everything it sets out to do, presenting a ton of promise for future video game-to-television adaptations for Netflix, and potentially other streaming platforms, in the future. Even if there’s far too little of it for now, Castlevania fans are bound to love this show, and even if you’re not familiar with the games that inspired it, general fans of gothic monster tales, visceral anime and/or dark fantasy will definitely want to check this show out!

Granted, Castlevania is not ‘true’ anime, and is instead ‘Americanime’, since it’s produced domestically in North America, not Japan, despite the Castlevania game franchise originating from a Japanese game company. This Netflix series adaptation feels like something of a hybrid between the anime designs of the Castlevania series’ Game Boy Advance and Nintendo DS-era offerings, and the more Western gothic style of the recent Castlevania: Lords of Shadow games. The animation is sometimes a little stilted as well, and doesn’t consistently flow with a particular sense of smoothness, but the shocking violence and strong character designs do nonetheless create an animated world for adults that feels immersive and gripping to watch, right from minute one. You certainly have to have a strong stomach, since the over-the-top violence in Castlevania can sometimes be very squeamish and gory, but if you’re alright with that, you will find that, for Netflix’s first video game-adapted television series in particular, Castlevania is put together with a clear amount of effort and conviction. 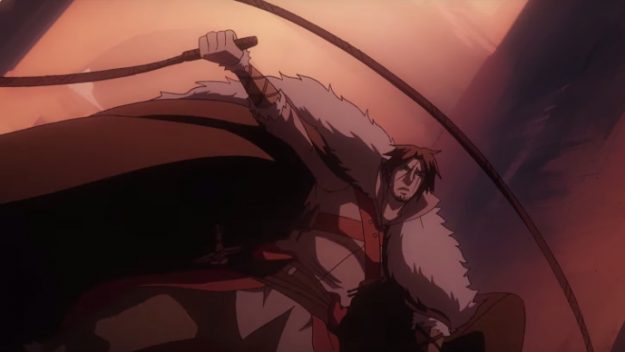 Despite simply calling itself ‘Castlevania‘, Netflix’s Castlevania series instead adapts the series’ classic third game instead of the original, that being Castlevania III: Dracula’s Curse (it also borrows a couple of oft-referenced Castlevania series story threads from the source games’ most beloved entry, Castlevania: Symphony of the Night for PlayStation), which released on the Japanese Famicom Disk System in 1989, and came to North America and Europe on the classic Nintendo Entertainment System in 1990 and 1992, respectively. The reason for adapting the third game and not the first game appears to be the fact that Castlevania III: Dracula’s Curse takes place around the very beginning of the increasingly crowded Castlevania video game timeline, and establishes the very first canonical battle between the monster-hunting Belmont clan, and their arch-nemesis, Dracula, who operates more like Satan himself in this franchise, being both the king of vampires and the lord of all evil simultaneously. This origin for the Belmont/Dracula rivalry, which spans almost an entire millennium of official video game canon at this point, unfolds in the Romanian region of Wallachia, circa 1476 A.D., when Dracula declares war on humanity after they execute his wife for being a witch.

Immediately, this presents a large, but effective deviation from the story of the source games, which often have Dracula attacking humanity simply because he’s evil and hates good things. In this show however, Dracula is made into a much more fully fleshed-out character, despite only really appearing at the start of the season, and vanishing afterward. In this show’s take on the character, Dracula is a man of science and progress who just so happens to be a vampire, with his wife, Lisa coming to him because he is the only man willing to defy the church in the name of human advancement. This same corrupt and totalitarian theocracy also expelled the Belmont clan from society, who have protected people from monsters and dark magic for generations. This excommunication and ostracizing leads to protagonist, Trevor Belmont, voiced by Richard Armitage, who is reunited with his Hobbit trilogy co-star, Graham McTavish as Dracula here, becoming a shiftless drunk with no sense of purpose or duty. 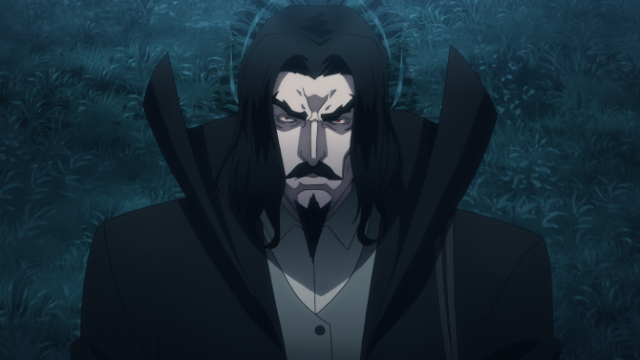 The drastic change to Trevor’s character is also very unlike the source games, but again, it feels welcome here. At this point in human history, the church’s word is law for Wallachia and many parts of Europe after all, and the superstitious townsfolk of Wallachia will happily reject even their most devoted protectors, if they think that God despises them. Trevor doesn’t even battle Dracula at all in this first season of Castlevania in fact, and is instead more frequently dealing with issues related to the church, which gradually increase as Trevor keeps running afoul of both them and his own reputation. This is nicely helped by Armitage nicely bringing a sense of both presence and levity to Trevor’s character, who is a skilled and imposing fighter, but also a bit of a goof. Some may feel that the cheeky humour clashes with the otherwise dark and visceral presentation of Castlevania in this television incarnation, but personally, I enjoyed a more light-hearted and comical Trevor Belmont. Trevor is certainly cool and capable in the games, but he also has very little personality there. This show finally gave Trevor more dimensions as a character, and made him a more memorable anti-hero, not to mention a genuinely cool and funny one.

Fellow Castlevania III: Dracula’s Curse protagonists, Sypha Belnades and Alucard also show up during this first season of Castlevania (Grant DaNasty, the climbing pirate, so far seems to be absent from this television adaptation), and while Alucard doesn’t make much of an appearance until the very end of the season, Sypha provides an interesting and fun foil to Trevor, with the show even finding a clever explanation for why Castlevania III: Dracula’s Curse originally pretends that Sypha is male when she’s first encountered. The series manages to be faithful to the source game where it counts, but its deviations and expansions to the lore of Castlevania III: Dracula’s Curse also make sense and help to enhance the plot. There’s only a few moments of legitimate action in this debut season, likely due to the constrained four-episode length, but this handful of action moments also feels faithful to the games and fun to watch, despite some of the animation stiffness that will probably be ironed out in future seasons. 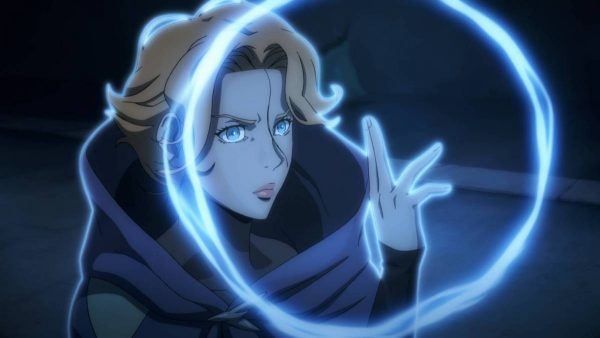 This first season of Castlevania, even at a paltry four-episode length, exceptionally proves how great a video game adaptation can be when it’s actually put into the right hands. It’s crass, violent and gory, and despite its animated exterior, you should definitely keep kids far away from it, since this is a series clearly meant purely for adults! Beyond that though, it’s indisputable that a video game adaptation for Netflix must be doing something right when the worst thing you can say about it is that there’s not enough of it. The already-confirmed Season Two will thankfully be twice as long in 2018, but despite that, it still feels like this first season is more proof of concept than a genuinely realized television season.

Nonetheless, I whole-heartedly recommend Castlevania to any Netflix subscriber that might be interested, whether it’s because they love the source games, they love gothic fantasy in general, they have a taste for adult-oriented anime (even if it’s Americanime), or they’re just looking for something that’s different than the Netflix Original shows that they’ve binged through already. With video game-to-film adaptations still struggling in the big screen space for now, it’s at least exciting and satisfying to see that the small screen is starting to get them right.

Castlevania: Season One Review
Its first season is far too short, but nonetheless, Netflix's Castlevania is a stylish, gory and surprisingly funny video game adaptation that gets virtually everything right on the first try!
THE GOOD STUFF
THE NOT-SO-GOOD STUFF
2017-07-10
85%Overall Score
Reader Rating: (0 Votes)
0%