Fear the Walking Dead kicks off its two-episode midseason finale event this week with an especially strong offering, one that begins laying the foundation for the brutal battle between Walker’s crew and Broke Jaw Ranch. “The Unveiling” offered a very effective slow burn storyline, one that saw the surprise return of a long-absent character, while also culminating in a particularly shocking turn that will easily keep viewers on the edge of their seats!

Things pick up with Jake, after he goes through with his stupid plan to try and sway Walker single-handedly, and unsurprisingly, Alicia sneaks along to accompany him. When the two then meet with Walker’s tribe, they agree to exchange hostages of a sort, as a gesture of good faith. Alicia stays at Walker’s camp while Jake travels back to Broke Jaw Ranch with a scout from Walker’s people, who just so happens to be Ofelia!

This was an unexpected, yet very effective way to re-introduce Ofelia to the show. This is the first we’ve seen of her in Season Three of Fear the Walking Dead, but it makes a lot of sense that she’d fall in with Walker’s crowd. She’s a lone woman who took a similar, yet different path from the Clark family, and obviously didn’t end up heading back towards her father and Strand. As with many of the more positive elements of Season Three as well, Ofelia has also become a much better and more interesting character here, specifically due to not being aware that her father is alive, and believing that she has no other choice but to play for the winning side now.

The separate interactions at the ranch and Walker’s camp were really great as well. Alicia being treated with surprisingly hospitality very much played against viewers’ expectations, while Nick and Madison also had to try and help the ranch get comfortable with Ofelia, whom they naturally don’t trust. There was a great irony that soon followed however, as Madison decides that she’s not comfortable leaving Alicia at Walker’s camp, so she commissions Nick, who has newly joined the ranch’s militia, along with Troy and a few soldiers, to bring Alicia back. This means going against the deal made with Walker, and leaving several of Walker’s men dead. As you can imagine, that’s probably not going to mean good things for Broke Jaw.

Jake seems to be the only one that’s all that bothered by reneging on the parlay effort though, and unfortunately, he’s still coming off as far too unrealistically naive in this episode. He even goes back to Walker’s camp by himself again after Madison’s stunt, and nearly gets himself scalped in the process. What did he think was going to happen?! Ofelia does at least talk Walker down from killing Jake however, even if it amounts to a mere stay of execution, and this also seems to lead to Ofelia getting permanently dumped at the ranch, thus exacerbating Broke Jaw’s discomfort with her.

At first, it really feels like the episode is going to go in one particular direction, as Ofelia starts having to settle back in with her former people, and make her peace with the Clark family all over again, after taking their truck and speeding off from the hotel during the events of last season. This made it all the more shocking when several of the militia soldiers, including Nick, suddenly start seizing up and vomiting, apparently poisoned by Ofelia’s coffee. Turns out, Ofelia was a trojan horse for Walker, who begins his attack on Broke Jaw as the episode ends! I don’t know how Nick is going to get out of being poisoned, especially after the other soldiers quite clearly die, but either way, Madison chasing a fleeing Ofelia is just the first of many challenges for the ranch’s people, leading into the following episode very effectively! 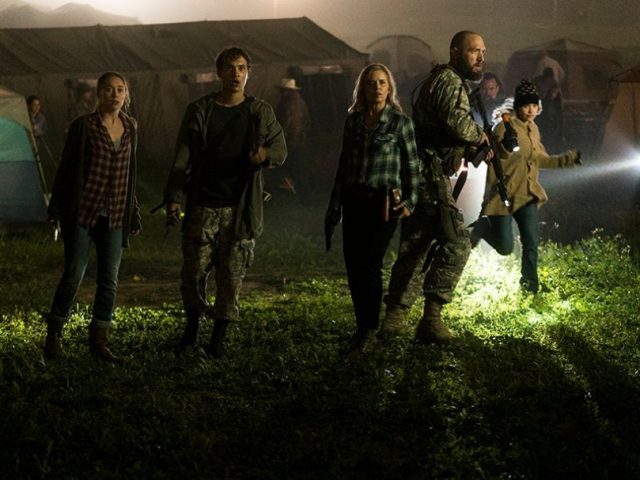 “The Unveiling” was very much about character, suspense and buildup, and did all of that very well. Sticking this episode with the following episode on the same night was probably the right call too, as this episode probably wouldn’t have been as effective if it forced viewers to wait another week to see how Walker’s attack pans out. Of course, that’s obviously not the only reason why Fear the Walking Dead is conveniently starting its midseason break next week, since AMC wisely doesn’t want to compete with HBO’s massively popular Game of Thrones in this same Sunday night timeslot over the next several weeks. Either way though, Season Three’s front half appears to be wrapping up on a high note, and hopefully this excitement carries over into the latter midseason finale episode as well!