2017 may mark the 30th anniversary celebration for Capcom’s Street Fighter franchise, but as far as many people are concerned, the series didn’t begin with its original (and frequently maligned) entry from 1987. Instead, Street Fighter was considered to have come into its own with 1991’s stellar and timeless Street Fighter II: The World Warrior, a game that more or less pioneered tournament fighter gaming as we know it. Plenty of equally strong competing fighter franchises have since come onto the tournament gaming scene over the years, from Mortal Kombat to Virtua Fighter to Tekken to Super Smash Bros., but it’s thanks to Street Fighter II that the culture behind fighting games even exists at all.

For all intents and purposes then, Ultra Street Fighter II currently stands as the most complete, fully-featured and accessible version of Street Fighter II that’s currently available to consumers, and fans of this classic fighter will no doubt appreciate that. The bad news however is that there’s not nearly enough content here to justify the ridiculous $39.99 USD/$49.99 CAN price tag, which is over twice the cost that Super Street Fighter II Turbo HD Remix commanded during the previous console generation! If you really want Street Fighter II for your Switch, Ultra Street Fighter II: The Final Challengers gives you a great core remaster of that classic game, made all the better by the option to take it on the go, but you’re probably best off waiting to grab it on sale if you’re on a tight budget, or even a moderate one.

Unfortunately though, there are some caveats to the re-worked presentation of Ultra Street Fighter II, the most noticeable of which are some of the background details becoming static when the modern HD visuals are used. Stage details like the boat in Ken’s stage bobbing up and down for example are perfectly present and preserved when the classic graphics are used, but with the HD graphics, the boat is perfectly still, along with several other environmental effects that no longer animate in other arenas. This is a strange oversight, and is the main visual element that Super Street Fighter II Turbo HD Remix definitely did better, even on the previous generation of consoles, since that remaster’s backgrounds felt more consistently alive and detailed. Similarly, the first-person ‘Way of the Hado’ mode just looks bland, even when it takes some art assets directly from the more modern Street Fighter IV and Street Fighter V, with the Street Fighter V effects especially leading to some small frame skips and animation hiccups at times, due to the Switch hardware not being as powerful as the competing PS4, let alone gaming PC’s.

As for the modern audio effects and voice clips however, they’re definitely more mixed in quality. For some reason, hits don’t have quite the same degree of impact in their modern incarnations within Ultra Street Fighter II, with some characters not quite hitting with the same might that they did in prior versions of the game. Likewise, a few special effects sound less impressive than they did in prior versions of Street Fighter II, and while the especially carefree announcer isn’t bad, he definitely sounds more chipper and less intense here, especially for a game that’s supposed to be about street brawls. Capcom also seems to have not bothered recording a new English voice track for the HD presentation either, since this series’ same recycled Japanese voiceovers from the past several Street Fighter games are always used when the HD graphics are enabled. Some characters sound fine with the Japanese audio, but some sound way too jovial and anime-esque in this case, which doesn’t wholly fit with the style of this game, especially if you’re a purist from Street Fighter II’s arcade heyday.

Street Fighter II is as basic and fundamental as tournament fighters come, but even then, the game continues to hold up pretty much perfectly over twenty-five years later. The simple one-on-one 2D melees continue to be easy to learn and hard to master, with the entirety of Street Fighter II’s classic cast from its various 16-bit incarnations all being readily playable here (even hidden boss fighter, Akuma is now selectable as a playable character for any mode in this remaster), complete with two all-new exclusive character additions for Ultra Street Fighter II; Evil Ryu and Violent Ken, two variations of classic Street Fighter protagonists, Ryu and Ken that previously appeared in various Street Fighter spin-offs that Capcom produced in years past. 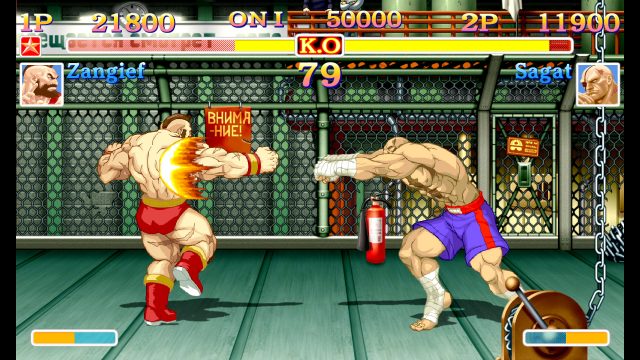 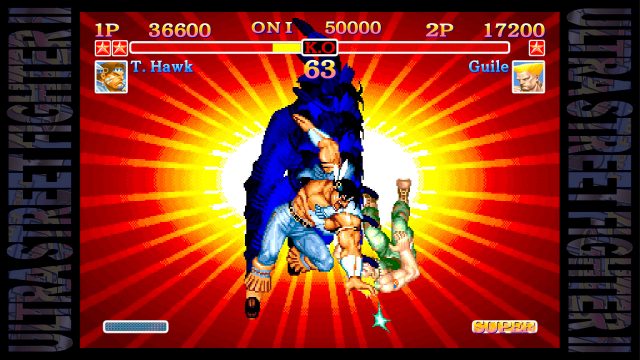 Ultra Street Fighter II’s new modes include the Buddy Battle mode, which is a 2-vs.-1 mode where two fighters share a life bar and take on just one other fighter, which is interesting at first, but definitely felt more polished and enjoyable when the same idea was attempted in Street Fighter Alpha. Buddy Battle is at least more fun than the rather awful Way of the Hado mode however, which is a first-person mode that has players using the Joy-Cons’ motion controls to perform ‘real-life’ special moves as Ryu, taking on armies of faceless Shadaloo soldiers in a shooting gallery-style distraction. To be frank, this mode is completely broken, with the motion controls almost consistently failing to register, making the entire thing pretty pointless for just about everyone. It could have been a cute little side game, but as it stands, Way of the Hado will merely frustrate you, and is best left ignored.

On the note of the controls, the ability to take Ultra Street Fighter II on the go, where you can quickly and easily pass a Joy-Con to a friend and play against one another, remains a big draw when it comes to bringing Capcom’s seminal fighter onto Nintendo Switch. That said however, playing with standalone Joy-Cons forces you to use a less reliable Control Stick for movement, jumping and special move combinations, just as playing in Handheld Mode will stick you with either said Control Stick, or the Left Joy-Con’s Directional Buttons for the aforementioned functions, which don’t feel nearly as comfortable or intuitive to work with as they would on the Control Pad that Street Fighter II was clearly best designed for. Fortunately, the controls are comfortable, responsive and overall excellent if you play with a Switch Pro Controller, where you can easily make use of a great Control Pad, and enjoy a perfectly reliable button layout. Hopefully you own one of those, since Ultra Street Fighter II is a lot less comfortable when you have to use the Joy-Cons, even if it’s still certainly playable.

It must also be noted that Ultra Street Fighter II seems to offer noticeably more stable and reliable online connectivity than Super Street Fighter II Turbo HD Remix did before it, and is definitely much easier and faster to play online than the series’ most recent Street Fighter V was during its launch window in particular. If you’re still interested in playing Street Fighter II against online opponents rather than your local friends, you’ll find that Ultra Street Fighter II actually has a pretty strong suite of online features. You can easily jump into quick matches, refine a search for specialized opponents, or create a specialized lobby with preset conditions if you want to make things interesting. You can also play in casual matches or ranked matches, and can easily check your scores from a variety of angles with a few simple menu navigations. Finally, if you’re so inclined, you can link up two separate Switch units and play against a friend, though you could also just as easily play on a single Switch unit, and not really see a difference in gameplay, since this is a fighting game after all.

There are a few other extras tossed into Ultra Street Fighter II that fans will probably like, including an art gallery mode where you can also listen to the game music, as I mentioned, as well as a simple colour editor that lets you tweak costume colours for the game’s fighters. There’s also a flexible training mode and all sorts of collected stats and play data for you to keep honing your skills with. This all adds up to a pretty solid gameplay package as far as a modern remaster of Street Fighter II goes… Though even then, this game definitely isn’t worth $39.99 USD/$49.99 CAN! Once you can grab it at a discount, you will indeed find probably the best current build of Street Fighter II currently available in Ultra Street Fighter II, even if its exclusive play modes certainly don’t compare to the excellent gaming classic that players are no doubt coming for in the first place.

Ultra Street Fighter II is blatantly overpriced, and some of its secondary modes being so lacklustre only makes that high price even worse, but it still at least presents what’s arguably the best version of Street Fighter II that money can buy at this point. It just shouldn’t take quite this much money to buy it, even considering the fact that this game offers a physical package at retail. Still, once it gets a considerable price cut, Ultra Street Fighter II will become a lot more recommendable to Street Fighter fans who still find enjoyment in revisiting one of this series’ finest entries. The game certainly feels primarily designed for them, especially since general fighting game enthusiasts will probably have a lot more long-term fun with Nintendo’s own Arms, which is currently taking the platform’s fighting game scene by storm single-handedly.

Thus, the question of whether to buy Ultra Street Fighter II really comes down to how much you love Street Fighter II, and how badly you want it to be readily available for your Nintendo Switch library. If you’re less than a highly devout fan, then paying full price is out of the question. If you still feel some fond nostalgia for Street Fighter II and happen to own a Switch however, or at least plan to pick one up in the near future, then keep an eye out for when Ultra Street Fighter II inevitably goes on sale, because it’s still a great remaster of a highly beloved classic. If all you want to do is take a solid version of Street Fighter II on the go though, then you can still do that, with more than one option even, via the New 3DS Virtual Console, and that will definitely cost you a lot less to boot!