Overcooked has been something of an indie darling since it first launched on PC, PlayStation 4 and Xbox One last year, even being crowned the top indie game of 2016 overall at this year’s BIG Festival in Sao Paulo, Brazil, and taking home two BAFTA awards for best British game and best social/family game to boot! The game’s unique, ahem, recipe of co-operative-based arcade cooking challenges was previously announced to be expanding to this year’s new hybrid console, the Nintendo Switch as well, and apparently, it’s happening very soon! 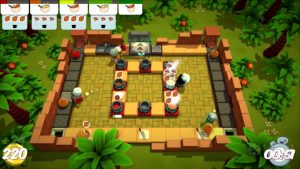 After being listed among a huge selection of indie game announcements for Nintendo Switch during a Nintendo Direct presentation from several months ago, Overcooked: Special Edition will finally officially release on the Nintendo Switch eShop this coming Thursday, July 27th, for $19.99 USD. The game will include all of the previous expansions made to the former PC, PlayStation 4 and Xbox One builds of Overcooked from last year, including several Versus stages that let you play head-to-head with friends, a grand total of 22 playable chefs, and up to 44 main campaign levels that can be attempted solo, or with a friend in local couch co-op. Disappointingly, it doesn’t look like the Switch version of Overcooked will add online play, a feature that also isn’t present in the prior three builds either. It will however exclusively include HD Rumble capability via the Switch’s Joy-Con controllers.

Overcooked, developed by Cambridge, U.K.-based studio, Ghost Town Games, and published by Team17, challenges players to prepare dishes under a strict time limit, either by themselves or with an ally, which includes preparing recipes, cooking, serving and cleaning. Successfully carrying out orders without mistakes will net players coins, which can be tallied up at the end of a round to earn up to three stars in ranking. Each level mixes things up by changing the layout of the kitchen, including increasingly eccentric obstacles that get in players’ way, from crosswalks to the very surface itself possibly working against players via ice or movement.

Keep cooking up Eggplante for all major news and updates on Overcooked, and other great indie games.