It’s legitimately amazing how quickly and aggressively Preacher rebounded this week, after an especially apparent low point in last week’s episode. This week’s episode, “Sokosha” however, offered a wonderfully tense and exciting struggle against the Saint of Killers, while still doing it in a fun, offbeat way that served the show’s eccentric dark comedy direction very well. In short, this episode really represents Preacher at its best, and this easily marks the greatest episode of the show’s sophomore season at this point!

Things begin with a rather mysterious cold open showcasing a Japanese man selling some sort of organ donation-like procedure, which allows financially struggling people to get by, by giving some unspecified part of themselves to the rich and powerful. It’s not known exactly what this procedure entails until later in the episode, but the payoff here was really great, when it’s eventually learned that this Japanese racket is all about harvesting souls, which can do things like seemingly cure dementia, among other miraculous remedies. This proves to be an essential element to Jesse resolving this episode’s conflict as well, after the Saint of Killers finally corners his group at Denis’s apartment. 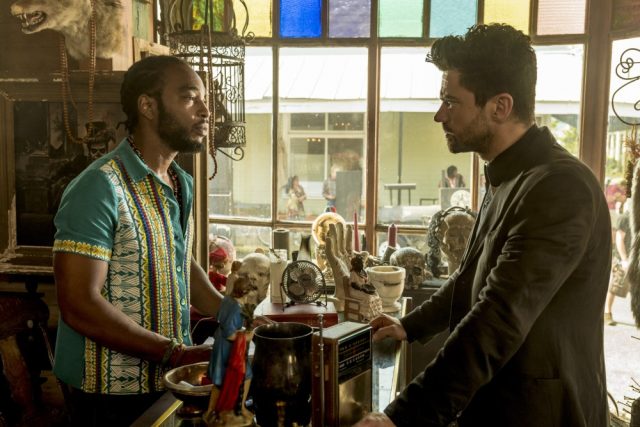 Even the way that the Saint eventually happens across Jesse’s crew is effectively exciting, as Viktor’s daughter leads him into the building that houses Jesse, but gives the Saint the wrong apartment number before escaping. This was actually a pretty cool twist, and nicely acknowledged the girl buying Jesse time, due to the care that his crew gave to her during the business with Viktor in last week’s episode. The Saint being given the runaround does lead to quite a few other tenants being butchered before the Saint reaches Jesse anyway, but it’s actually Denis that he happens upon first, when Jesse, Tulip and Cassidy get enough advance warning to briefly take off back to Las Vegas, where they learn of Fiore’s death.

This served as a well-chosen opportunity for the protagonists to read up on the Saint, and learn about his backstory, which is conveniently, and slightly humourously, left for anyone to peruse at the New Orleans public library. It’s here that the audience also gets a reminder about the Saint’s backstory, namely that he lost his wife and daughter to disease in the 19th Century, and subsequently lost his soul, becoming a mass-murdering psychopath that is eventually killed by a tornado, and thus condemned to Hell. We also learn here that the Saint fought for the Confederate side of the Civil War, because of course he did. In any case, this is a man who clearly thrives on violence, but the knowledge imparted by the library also gives Jesse the necessary means of turning the tables on him, after Cassidy suddenly recalls that he forgot about Denis. That’s bad enough, but the shock reveal later in the episode that Denis is Cassidy’s son really does nicely illustrate that Cassidy wasn’t kidding about being a real bastard at his worst! 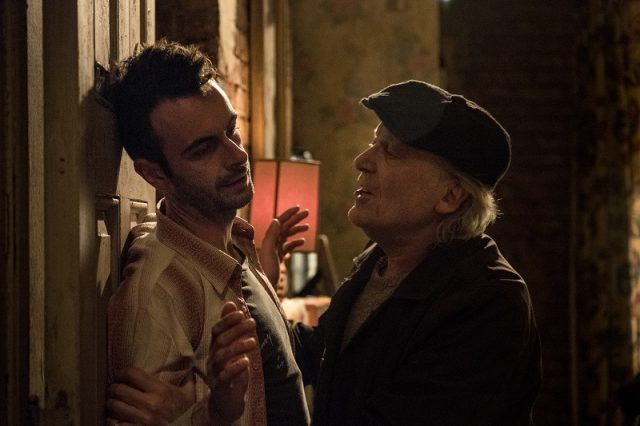 The issue with Denis leads into the great climactic story arc of an overall outstanding Preacher episode, as Jesse bargains with the Saint that, if he lets Denis go and gives up the chase, Jesse will give him a means to go to Heaven and reunite with his family. The Saint gives Jesse one hour to follow through, taking Tulip and Cassidy as collateral alongside Denis if he doesn’t deliver. While it’s a bit weird that the Saint would need to give such a tight time limit, since it’s not like he should be in any rush when he clearly has the upper hand, it nonetheless provided a very tense obstacle for Jesse, as he must explore family connections in the voodoo business (seriously), to find the Saint a compatible soul, complete with having to break into the Japanese truck from the start of the episode, in order to find wht he’s looking for. Yet another great twist was had here as well, when none of the souls effectively match the Saint, but Jesse’s own soul is a very close match, leading to Jesse taking it out so that he can present it to the Saint and send him to Heaven.

Except Jesse doesn’t send him to Heaven! Capping off a very thrilling episode very nicely, Jesse decides that he’d rather send the Saint to Hell, even if his own soul goes with him, and he can do that now, since the Saint having a soul means that he can now be controlled by the Word of God. Jesse doesn’t just send the Saint to Hell either, as he reconsiders simply using the Word of God to banish the Saint immediately, instead ultimately trapping him in the Japanese truck and dropping it in the nearby swamp, leaving the Saint for dead. Damn, that’s cold! Then again, Jesse was stalked by the Saint across a big chunk of the country, with tons of people also being killed in the process, so it’s tough to blame him for wanting some sweet revenge, especially against someone he knows full well from the history books is a total bastard, one that probably doesn’t deserve to go to Heaven anyway, frankly.

Whether this is truly divine justice is a matter best explored later, but regardless, “Sokosha” offered a surprisingly clever, fun and exciting resolution to the current struggle against the Saint of Killers. I seriously doubt that the Saint will be stuck in that swamp forever, but with him out of commission, it will nonetheless provide a great chance for the Grail to hopefully get more focus over the next few Preacher episodes at least. It’s also easy to wonder just what Jesse may have sacrificed by having his own soul consumed by the Saint. Sure, the Japanese salesman claims that Jesse, “Won’t miss it”, but is that really true in the end? It looks like Jesse’s search for God has quite literally claimed a vital piece of him at this point, and with the Grail sure to turn their attention to him soon, the loss of his soul could very well leave Jesse at another unexpected disadvantage down the line, especially since the Saint of Killers is bound not to leave Jesse’s treachery unpunished!

Preacher 2.6: "Sokosha" Review
Preacher spectacularly rebounded with an excellent episode this week, as Jesse is forced to race against the clock to rid himself of the Saint of Killers' pursuit.
THE GOOD STUFF
2017-07-25
96%Overall Score
Reader Rating: (0 Votes)
0%