The DC Extended Universe has finally found a critical and community hit to match its usual commercial success in Wonder Woman, and that’s left many people wondering when the Goddess of Truth will embark on her second solo cinematic adventure in the DCEU. It was initially believed that the tentatively titled Wonder Woman 2 might be being held for two mystery 2020 dates that Warner Bros. has currently reserved for two unspecified DCEU movies, but it seems that we’re actually getting the follow-up a bit earlier than expected! 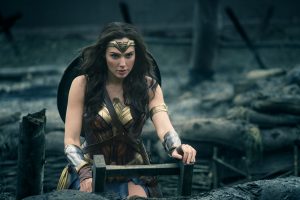 Warner Bros. has officially confirmed today that the Wonder Woman sequel will hit theatres on December 13th, 2019, and the movie currently holds that date to itself. This date will also place it nearly a year after Aquaman, another solo DCEU movie that is still on track to make a December 21st, 2018 release date, after other planned DCEU movies like The Flash’s planned solo flick, Flashpoint seemingly abandoned their formerly held dates that were first announced all the way back in 2014.

Wonder Woman director, Patty Jenkins still has yet to officially sign on to directing duties for Wonder Woman 2, but Jenkins currently seems optimistic about returning, particularly since she’s currently preparing the Wonder Woman sequel’s story treatment with DC Films boss, Geoff Johns. Jenkins previously claimed that the Wonder Woman sequel will feature a contemporary setting, and will no longer be a period piece like its predecessor was, but beyond that, nothing is known about which direction the follow-up may take. It is however already confirmed that Gal Gadot will continue to portray Diana Prince/Wonder Woman in Wonder Woman 2, after reprising the role again later this year for crossover movie, Justice League.

With Wonder Woman 2 now given an official release date, that makes it the only other DCEU movie aside from Justice League and Aquaman to currently be officially set and dated, after Warner Bros. has had to do some shuffling to the DCEU’s release schedule in the wake of various production issues, not to mention well-publicized backlash to sophomore effort, Batman v Superman: Dawn of Justice. Movies like Shazam, Cyborg and Green Lantern Corps. still tentatively hold their placeholder dates in 2019 and 2020 for now, but it seems all but assured at this point that they’ll be pushed back to a later release. At the recently wrapped San Diego Comic-Con, Cyborg wasn’t even mentioned among the DCEU’s fast-tracked movie releases, though Shazam and Green Lantern Corps. were still name-dropped as coming to the DCEU’s film slate over the next few years, alongside sequels, Wonder Woman 2 and Suicide Squad 2, and new franchise starters, The Batman, Batgirl, Flashpoint, and Justice League Dark.

Keep lassoing Eggplante for all major news and updates on Wonder Woman 2, and other projects in the DC Extended Universe.