After the violent and brutal climax to last week’s especially spectacular episode of Game of Thrones, it was an unexpected, and yet strangely appropriate surprise to have this week’s episode follow that up with a more character-focused episode, one that was even full of quite a lot of levity! “Eastwatch” feels like the show’s necessary breather before it once again pits Jon and his forces against the White Walkers, and the result is another superb episode, one that proves to be one of the season’s most entertaining, even if it also predictably shies away from the impossible task of trying to top last week’s climactic battle.

First and foremost, Jaime obviously survived that fall into the river, with Bronn fishing him out and helping him get back to King’s Landing. Sure, a huge contingent of the Lannister forces are now dead, and Daenerys makes an example of a couple more at the start of the episode for good measure, which happen to be Sam’s father and brother! The dramatic irony here as well is that the Citadel quickly hears the news of the remaining Tarly men being killed when they refuse to bend to Daenerys, yet doesn’t tell Sam, thinking that it will hurt his productivity. Compounding this irony is the fact that Sam flees the Citadel with Gilly and baby Sam at the end of the episode, ensuring that not only does Sam never hear the news of his kin’s demise, but that his productivity at the Citadel is permanently stopped. Not only was this an especially clever and vaguely amusing way to get Sam and Gilly out of the Citadel, but it also served as a surprisingly casual vehicle to have Gilly reveal to the audience from a tome that Rhaegar Targaryen’s marriage to Elia Martell was annulled, before he married a mysterious woman, no doubt Lyanna Stark. If the marriage is official, then Jon’s not actually a bastard, since he was conceived in wedlock, making him a legitimate Targaryen heir! 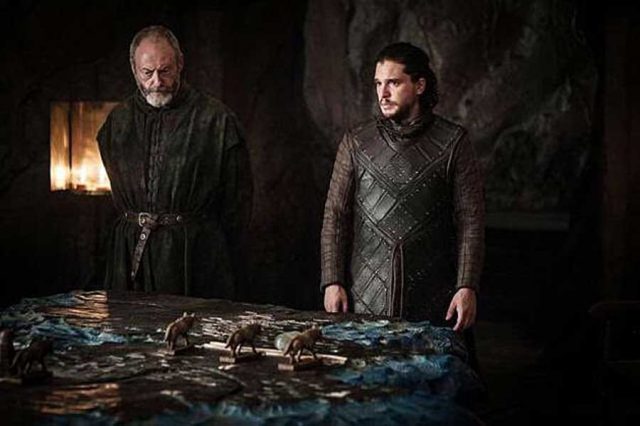 Jon was also quite busy throughout this episode, as he moved between several locations, and yet none of them were Winterfell. This was noted in this episode, as the unrest at Winterfell that I predicted a few reviews ago is now starting to come to pass, as Sansa is forced to listen to the other Northern lords complain about Jon’s absence. Arya is disturbed that Sansa doesn’t defend Jon, and Arya following that up by telling Sansa directly that she’s clearly coveting rule of Winterfell herself was something that hit with quite a bit of weight. This is especially true when this same episode reveals that Jon is a true, legally recognized Targaryen heir according to Maester Maynard’s logs.

I also imagine that it’s no accident that the Winterfell storyline ends with Arya and Littlefinger playing a psychological game of cat-and-mouse, as they try to spy on each other, and deduce each other’s agenda. It’s looking increasingly likely that Littlefinger is plotting to insert Sansa as the leader of Winterfell, a plot that Sansa is likely fully aware of, and this could mean big trouble for Jon, especially since Littlefinger doesn’t have to lay a finger on Jon, as Jon’s own family lineage would render his title as King in the North theoretically null and void. Arya finding the letter written by Sansa many seasons ago in Littlefinger’s quarters (another awesome callback!), where she begs her family to pledge loyalty to Joffrey, was definitely a great way to find out that something is rotten with Sansa and Littlefinger as well. 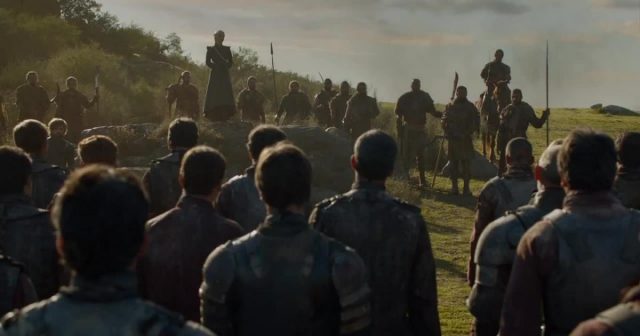 We also get some really great teases for the seemingly inevitable Jon/Daenerys romance to come, as the two grow closer, and Drogon is shown to take an immediate liking to Jon as well, further accentuating the growing foreshadowing of Jon learning his heritage as a lost Targaryen son. Jon does leave Dragonstone in this episode, but it’s still in service to Daenerys to a degree, especially since Jorah returns to Daenerys’ side in this episode, and also accompanies Jon on his quest to catch a White Walker. Yes, seriously. This sounds ridiculous on paper, but it really is the best option to start convincing Westeros of the threat to come, especially folks like Cersei, whom Tyrion tries to sway by appealing to Jaime. Tyrion’s return to King’s Landing only took up a small part of the episode, but it did result in one of this week’s best dramatic moments, as Tyrion and Jaime must confront each other over Tyrion’s murder of Tywin several seasons ago, and how their mutual anguish over their father has driven them apart.

The King’s Landing portion of the episode also finally brought back a long-anticipated fan favourite, namely Gendry Baratheon! The whereabouts of Robert’s bastard son has been one of the lingering mysteries of this show for many years, and it made for another surprisingly hilarious moment to have Davos stumble upon Gendry working as an ordinary blacksmith in King’s Landing, right under Cersei’s and Jaime’s noses! That was a surprisingly brilliant way to play with the grand expectations of fans, and also proved to be a logical way to put Gendry in Jon’s company, as the two meet, and immediately bond over shared accounts of their fathers fighting together in the past. Gendry even accompanies Jon to go North of the wall alongside Jorah and Tormund, which is a pretty exciting prospect! The best part of all? The Night’s Watch captures The Hound and the Brotherhood Without Banners wandering around The Wall, and they also join Jon’s side for the White Walker mission! Looks like we have a well-rounded, RPG-style party of warriors for next week’s episode, which looks like it’s predictably going to primarily center around this very difficult and very dangerous task! 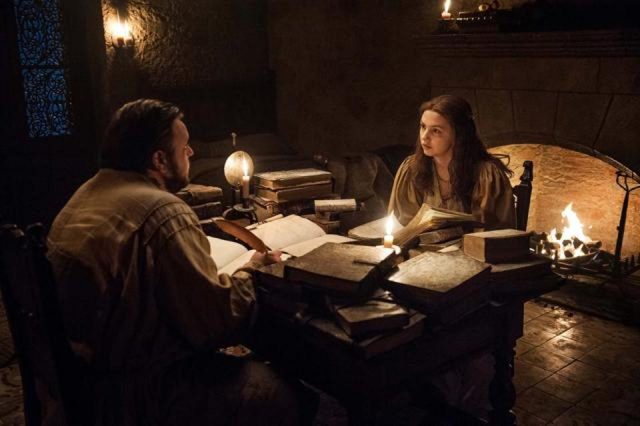 A final big bomb to mention in this episode is that Cersei is pregnant, and Jaime is once again the father of the child! This is a very unexpected development, and possibly another force threatening to conspire against Cersei in the near future, as she seems all too happy to admit that she’s conceived yet another incest-born child with her brother. In this respect and others, “Eastwatch” is essentially the closest that Game of Thrones can come to being a comedy-focused offering, but there were still a good chunk of dramatic moments to complement the increased emphasis on fun and levity. Daenerys’ dramatic execution of the remaining Tarly nobles (Sam excluded) is bound to have consequences later, and Tyrion’s reunion with Jaime was just as dramatic and tense as one would imagine, even when Jaime nonetheless relays Tyrion’s message about the White Walkers to Cersei. It’s good to have a bit more fun on the series this week though, and as is becoming typical for one of this show’s best seasons yet, despite the shortened episode count, there really isn’t much of anything to complain about in this episode. If you do happen to like Game of Thrones dark, violent and serious though, I’m sure you’ll get plenty more of that again next week, as Jon’s company try to wrangle their very own White Walker sideshow!

Game of Thrones 7.5: "Eastwatch" Review
Game of Thrones lightened up significantly this week, offering some dramatic beats between a lot of levity and hopefulness in another excellent episode.
THE GOOD STUFF
2017-08-14
95%Overall Score
Reader Rating: (0 Votes)
0%