Pikmin is, and will always be known as one of Nintendo’s strangest and most surreal franchises. After all, it takes the ‘crash landing on an alien planet’ scenario into some rather unique and otherwise unheard of territory, wherein the human quickly befriends the native organisms and then uses them as worker drones. Then, of course, there’s the presentation with its quirky and upbeat animations, odd character designs and everything else.

To be completely honest, I’ve never really known what to think of the series. I purchased the first two games for the GameCube, when they were discounted Nintendo Selects or whatever the equivalent was back then, but didn’t really play either of them. I tried to get into the first one once, but found it tedious and slow so it went on the back burner before falling into the eternal abyss known as my backlog. Or, as I should call it, my “I’ll play it someday soon” pile.

Then, when Pikmin 3 rolled around, I was supplied a copy for review purposes. Going in, I wasn’t sure of how I’d feel about the game, but it actually ended up being pretty fun and rather impressive. Nothing I’d want to play over and over again, but enjoyable as a one time through experience. 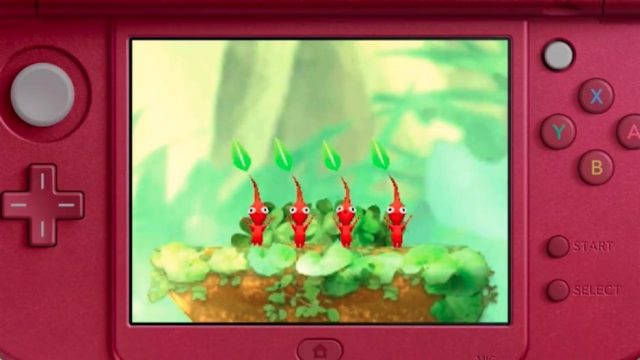 So, when I first heard about the recently released 2DS/3DS exclusive, Hey! Pikmin, it caught my attention and became something that I wanted to try, even if I’d just end up renting it for a week. Sure, most of the release-time reviews and buzz ended up being pretty ho-hum, but I found myself still wanting to give it a try, and actually found that I enjoyed it more than I’d expected to. Was it great? No, absolutely not. It was half-decent, though, and serviceable.

Thus, the rental was worthwhile.

Hey! Pikmin takes a new approach to things, and sets itself apart from its peers. Through it, the franchise’s somewhat popular formula has been simplified and transformed from a 3D experience into a 2D, sidescrolling one. The stylus has also become the player’s best friend, as it’s used for everything outside of moving Captain Olimar left and right.

This time around, Captain Olimar finds himself shipwrecked on a different planet. Well, shipwrecked is kind of a loose term here since his space vehicle isn’t as damaged as it is out of fuel. Yes, for whatever reason the crash managed to deplete the thing’s sparklium reserves, meaning that our ‘hero’ must venture outside and find as much as he can on his newfound planet. It’s here where the colour coded Pikmin creatures come into play, as they’re the ones who do most of the dirty work for their new, human, friend.

When you make your way through Hey! Pikmin‘s seven to ten hour-long campaign, you’ll visit eight different regions and get to experience what each one has to offer. They’re all unique, of course, but they run the gamut of predictable styles. For starters, there’s the base region which is a standard grassy area. Then, things ramp up as they progress, introducing water, snow and fall-themed worlds along the way. Of course, each level is tailored to the type of Pikmin it gives you, so if it’s got water in it then you can expect a lot of blue Pikmin because they can swim. Conversely, if there’s electricity there’ll be yellow Pikmin (who can also be thrown further than any others), or if there’s fire there’ll be lots of red ones. They’re the basic type, though, with rock and flying Pikmin being the game’s other two variants. Unsurprisingly, the rock ones are heavy but strong and can break boulders when tossed, whereas the flying ones are nimble and can carry you for short distances.

As you’ve likely already surmised, the gameplay consists of lots of Pikmin throwing, which sounds like a sport but really isn’t. While the base goal of the game may be to get through its stages, your real goal is to collect as much sparklium as you can, and that requires Pikmin. Thrown Pikmin, who must be tossed onto ledges or into the air in order to collect red and (golden) yellow pieces of sparklium, the former of which happen to be worth more. And, as with any platformer, each of Hey! Pikmin‘s levels contain two to four pieces of comedically named treasures, like watches, rings and classic NES and Game Boy cartridges. Collecting those yields the most sparklium, but each one requires a different amount of the little aliens to carry, making it so that those who go for 100% will need to really watch how many they lose during each stage. After all, these creatures can die and do so easily, especially when they’re touched by an enemy, hit by some sort of falling trap or happen to be thrown into the wrong element.

What all of this means is that if you happen to own one of the bulkier 2DS or 3DS models you can expect to have a bit of a sore arm after a while. I guess it depends on whether you’re right or left-handed, but whichever one ends up being responsible for holding the system is not going to be all that happy after extended play sessions, because one hand needs to be free for stylus swipes and taps. Granted, that isn’t the game’s only required control method, as one must also move Olimar left and right with the circle pad or a couple of face buttons. Meanwhile, making him jump requires tapping a jetpack icon on the touchscreen, which then allows you to hover for a very limited amount of time.

The touchscreen is also used for whistling at the alien creatures, who immediately respond to such a sound. When you come across them, they’ll usually be hiding in bushes or behind large rocks, or perhaps even running from something dangerous like an enemy (all of which can be killed by throwing your friends at or onto them). They’re timid, too, meaning that even if they see Olimar they won’t join his cause until he whistles. Furthermore, this mechanic is also very handy when it comes to controlling them, because if they’ve strayed from your pack (which will occasionally happen even though the game’s AI is surprisingly solid) they’ll come running when they hear your call. That’s actually why this thing is called Hey! Pikmin, since you’re always calling to them for one reason or another.

Each of the campaign’s eight regions has several different stages to explore and complete, and doing so will then unlock two different types of bonus areas. These aren’t the only extra levels Azrest has included in the game, but the others (around 2 per region) are locked behind a paywall, with that being the game’s amiibo figure. If you pay extra to own it, you’ll gain access to them, but if you don’t then you’re out of luck and will unfortunately have to miss out on a sizeable part of the experience. It’s a stupid design decision, and one that I will never support, especially since I have zero interest in amiibos themselves. If Nintendo wanted to lock something behind a paywall, it should’ve been something much more minor.

The bonus stages that are accessible without the amiibo come in two different flavours. The first type, which is designated by a blue icon, is dubbed a sparklium fountain and refreshes daily. By visiting these, players can earn lots of bonus sparklium by partaking in minigames (for lack of a better term). What happens is pieces of sparklium fall from the sky and you have to do your best to collect as many as you can within a certain time limit. Clocks do fall as well, though, meaning that you can extend your given time period if you manage to get to them before they disappear.

What’s left to discuss is the purple variant, which hides unique puzzles wherein the player can earn more Pikmin. The goal is to use the ones you’re given to get to and grab a colour-coded pellet with a number on it. Success in doing so will then add the given amount (and type) of Pikmin to your collection. This will not help you with any campaign stages, though, as the collected Pikmin (and each one that you find/save during each level) congregate at a wilderness area called Pikmin Park. There, they can be assigned to explore different areas in order to find hidden amounts of sparklium.

The idea, then, is that you must regularly visit Pikmin Park in order to see what’s been found and/or give new orders. Don’t expect a lot of depth from this mechanic, though, because it’s pretty damned basic like the rest of the game is. They didn’t think outside of the box very much, and it shows.

For one to fully enjoy Hey! Pikmin, they’ll have to suspend belief and just accept what’s going on. If you think too much about how the Pikmin ended up on this new planet, or start to wonder why human items are scattered throughout it, you’ll drive yourself mad. Just don’t think about that kind of stuff, or read into the storyline too much. Then again, it’s not like there’s a lot there.

With all that being said, I can’t see many people falling in love with this game. It’s fine, okay and serviceable overall, but it’s never all that entertaining and can become tedious rather quickly. You may even find yourself bored after a while, unless you keep your play sessions brief.

The visuals, on the other hand, are pretty solid even if the system’s 3D isn’t well utilized. Every stage happens to be both detailed and easy on the eyes, with lots of beautiful backgrounds to gawk at. There’s also some decent level design to be found, even if most of the levels do end up blending together after a while. The music, on the other hand, definitely leaves something to be desired, although the sound effects are pretty solid. Granted, you may end up becoming sick of listening to the Pikmin and their native sounds.

At the end of the day, Hey! Pikmin is something that only a specific group of gamers will really enjoy. It’s too slow, repetitive and downright tedious to really capture the heart of the average gamer, and is also quite easy (for the most part), with some pretty simple stages and straightforward (but half-decent) boss battles. The only real challenge comes in going for 100%, which means finding and gathering all of the collectible pieces of treasure.

**This review is based on a copy of the game that we acquired ourselves.**

Hey! Pikmin Review
Hey! Pikmin is a half-decent, but ultimately forgettable spin-off. One that is hard to fully recommend because so much of its content is locked behind a paywall, with that being the purchase of its complementary amiibo.
Storyline29%
Audio 61%
Visuals82%
Gameplay60%
The Good Stuff
The Not-So-Good Stuff
2017-08-15
58%Overall Score
Reader Rating: (0 Votes)
0%