Game of Thrones set out with a very exciting idea this week, as Jon, Tormund, The Hound, Jorah, Gendry, and The Brotherhood Without Banners, alongside some Wildling red shirts, set out beyond The Wall to capture a White Walker as proof of the approaching undead army. For the most part, this season has beautifully capitalized on its many, many great ideas pretty much universally as well… At least until now. While, “Beyond the Wall” was still a very good episode of Game of Thrones in most respects, the show nonetheless hit a pretty clear storytelling speed bump this week, as several plot elements just didn’t ultimately add up or satisfy, due to having to crowbar story developments into place for next week’s quickly-approaching season finale. Thus, this marks the one and hopefully only instance where Game of Thrones was clearly hurt a bit by Season Seven’s reduced episode count.

The vast majority of this week’s episode of Game of Thrones naturally unfolded from the perspective of Jon’s company beyond The Wall, and this did provide a pretty good chance to deliver some fun character interactions. Tormund and The Hound have a very amusing conversation as they touch on each other’s backstories, while Jon also gets a chance to interact with Beric Dondarrion, a member of the Brotherhood Without Banners who has also been resurrected from death several times, due to the power of the Lord of Light. Much of this episode may simply be Jon’s party trudging through the snow, Lord of the Rings-style, but these well-written interactions still made these moments mostly entertaining, with a minimal sense of dragging pacing.

Of course, we also get plenty of action when Jon’s crew finally does manage to locate a White Walker contingent, after ambushing a small scouting party. This not only provides some excitement, but also indicates an interesting new fact about the White Walkers; All of their undead forces are destroyed when the leader who turned those wights is neutralized by Dragonglass. Jon’s party does nonetheless manage to wrangle one of the White Walker grunts, sending Gendry back to The Wall to inform Daenerys soon afterward, and that comes at the perfect time too. The proper undead army almost immediately surround Jon’s men after they send Gendry away, forcing them onto a small island surrounded by a frozen lake of surprisingly thin ice!

This is another standout sequence, as Jon’s men must try and figure out what to do, with Daenerys being their only real hope of survival. Complicating matters further is that Thoros, the priest for the Brotherhood Without Banners, freezes to death during the wait, threatening to leave the survivors short-handed, while also killing any chance that Jon or Beric could be resurrected again, should they die. Things get worse still when The Hound starts casually throwing rocks at the White Walkers, eventually accidentally indicating that the ice is solid enough for them to charge! This does lead into another impressive action sequence, one where the Wildling red shirts naturally all die, but fortunately, Daenerys does arrive just in time upon receiving Gendry’s raven, after refusing Tyrion’s pleas to stay out of the North. Daenerys even brings all three dragons with her, finally seeing the undead forces with her own eyes. 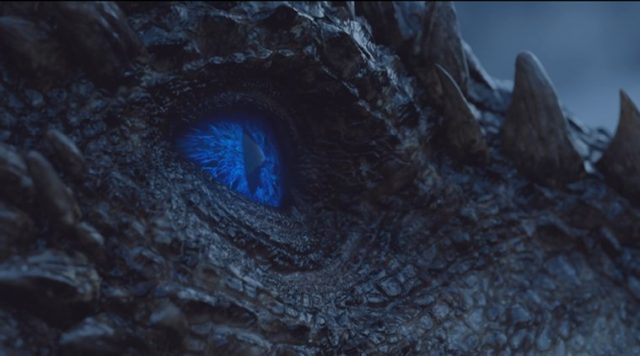 Here however is unfortunately where the story really starts coming apart, even if there is one last amazing twist for the episode. Daenerys manages to lay some serious hurt on the Night King’s armies, but in the process, the Night King is shown to be able to throw ice spears that can quickly and easily kill dragons! Viserion is hit by one of the spears and plunges to the ground, quickly dying of his wounds, and sinking into the ice. This was a very effectively shocking and dramatic moment for Daenerys, who previously seemed all but unstoppable with her dragons at her side. It also provided the necessary dramatic impact to fully convince Daenerys of the dangers behind the White Walkers, nicely setting the stage for next week’s season finale, when Daenerys becomes a full and permanent ally to Jon in his quest to save the realm. Better still is that the Night King manages to pull Viserion’s corpse out of the icy water in one final scene, reviving the beast as a White Walker dragon! That’s definitely not good for everyone in Westeros, since the White Walkers just became a hundred times more dangerous, now that they have a dragon on their side!

Like I said though, beyond the powerful, dramatic death and re-animation of Viserion, the rest of the episode’s resolutions become seriously problematic and rushed. To start, Jon heroically tries to fight off a bunch of White Walkers by himself so that Daenerys can escape with the other survivors, dodging another ice spear with Drogon in the process, but this leads into two facepalm-worthy fake-outs, as Jon slips into the icy water himself, which should have definitely killed him after many days without food, let alone battle exhaustion. Instead, Jon simply pulls himself back up as if nothing happened. Oh, come on, even considering the Lord of Light’s influence, that’s completely impossible! Second, Jon is still surrounded by White Walkers even after this, but fortunately, in the mother of all Deus Ex Machinas, Benjen Stark just happens to be riding by (it’s possible that he was somehow contacted by Bran, but even then, that’s a stretch), right when Jon is about to die, and conveniently gives Jon a horse and supplies, before Benjen sacrifices himself to the White Walkers so that Jon can escape. This was very contrived and annoying, essentially serving as a way for the writers to get out of the corner they wrote themselves into, while conveniently sweeping Benjen under the rug while they’re at it.

Finally, while we didn’t check in with King’s Landing or the other Lannisters beyond Tyrion this week, nor the Ironborn or the still-stranded forces at Casterly Rock, we did get a fair bit of time at Winterfell, to explore the growing distrust between Arya and Sansa. Initially, this is intriguing, as Sansa begins discussing Arya’s shadiness with Littlefinger, right when she has to send Brienne of Tarth to represent her at King’s Landing following a summons from Cersei, while Arya continues to investigate the secret agenda going on at Winterfell. Eventually, this culminates in the two sisters confronting each other, but this entire confrontation felt contrived and unsatisfying, sadly. Arya threatening Sansa so transparently feels like a stupid move, regardless of whether Sansa is up to no good or not, since, if Sansa is up to something, Arya has now blatantly tipped her hand, and if Sansa isn’t up to something, then Arya is just being terrible to her sister for no discernable reason. Sansa didn’t end up looking any better either, since she’s suddenly gone from being a confident leader to a whimpering victim in Arya’s presence. Both Stark sisters just ended up looking really bad here, but in a way that feels forced for the sake of pointless drama, rather than in a way that actually benefits the story to any considerable degree.

“Beyond the Wall” currently stands as the weakest episode of Game of Thrones’ seventh season at this point, but it nonetheless had enough White Walker-fueled thrills and drama to satisfy, even if the Winterfell subplots were significantly less successful. Jon and Daenerys fully solidifying their partnership after Daenerys encounters the White Walkers, and loses a dragon to them, was pretty great however, as was the generous helping of harrowing action that we got when Jon’s company finally did encounter the White Walker forces. We may not have been able to check in with anyone outside of the Northern region of Westeros this week, but next week’s season finale seems effectively poised to bring all of Westeros’ remaining factions together, before Game of Thrones’ final season likely deals pretty much entirely with the final battle against the Night King and his undead armies, whether that’s next year or in 2019. Looks like we have one final week to get all of our latest scheming, conniving and plotting in, because after that, the White Walkers are likely going to be everyone’s problem!

Game of Thrones 7.6: "Beyond the Wall" Review
Game of Thrones hit a small speed bump in Season Seven's penultimate episode this week, despite plenty of thrills and drama with the White Walkers.
THE GOOD STUFF
THE NOT-SO-GOOD STUFF
2017-08-21
80%Overall Score
Reader Rating: (0 Votes)
0%