NOTE: This review may contain some mild spoilers for the first season of, “Atypical.” That said, the review is written to accommodate those who have not watched the series, and as such, will avoid discussion of major story developments.

Atypical marks one of Netflix’s especially bold original sitcom efforts, since it so openly tries to tackle a subject that many consider to be uncomfortable or taboo. This is a series about Sam Gardner, a fictional 18-year-old young man who is on the autism spectrum. Across this initial eight-episode first season, the series chronicles Sam’s early transition into adulthood, namely his desire to start dating, and achieve more independence, along with how this affects his strong-willed sister, neurotic mother and clueless father.

This is a series with plenty of heart, and no shortage of courage, and fortunately, I’m in an especially strong position to critique Atypical, as I’m on the autism spectrum myself, having Asperger’s Syndrome, which is a form of high-functioning autism. That disclosure is necessary on my part, not just to keep professional bias in check, but also since those with no exposure to autism and those with either direct or indirect exposure to it, especially those who are on the spectrum themselves, will receive Atypical very differently in some respects. After all, this is an uncompromising show with plenty of desire to depict autism in a respectful, yet honest way. As you can imagine from the first season of a Netflix series taking on a subject this challenging however, Atypical doesn’t get everything right about autism, nor the experience that one may likely have in dealing with it.

Despite its occasional missteps though, along with some of its questionable writing (and I’ll get to that), Atypical is still an above average Netflix sitcom in its debut season, getting off to a significantly stronger start than the likes of The Ranch, Flaked, and especially Fuller House. The show’s writing shortcomings hold it back from the likes of smash hit Netflix sitcoms like Unbreakable Kimmy Schmidt, Master of None and BoJack Horseman, but in terms of the comedy and charm, Atypical at least nails that aspect. This is especially due to strong performances across the board, particularly from Keir Gilchrist as Sam, who has the difficult task of adding heart and likability to a character that outwardly lacks advanced emotional output.

It’s in terms of the drama where Atypical becomes shakier and less consistent, at least in its first season. The show’s charming laughs are generally realized with universal aplomb, but when it tries to make more serious commentary about a condition that drastically affects some people’s lives, it sometimes bites off more than it can chew, in a valiant, but somewhat misguided effort to take on some autism-related subjects that it doesn’t seem to have a perfect grasp on. Some dramatic story arcs work very well, with Sam’s sister, Casey having a highlight arc, where she struggles with being overshadowed by the demands of her brother as she starts finding her own independent academic success. As charming as Sam can be, Casey is probably the show’s strongest character in several respects, since she’s the one that feels the most raw and real, and almost never descends into forced melodrama.

Sam’s parents however work to mixed effect. The problem isn’t in their actors, since Jennifer Jason Leigh and Michael Rapaport as Sam’s mother, Elsa and Sam’s father, Doug respectively, both deliver strong, heartfelt performances, managing to make the most of a script that doesn’t always work to their advantage. When the parents anchor more comedic scenes with Sam, they also tend to work very well, even if some of these scenes stretch the bounds of realism here and there. Again though, it’s when the show tries to deliver more serious character arcs surrounding Elsa and Doug that it sometimes falls flat on its face at worst, crossing the line from making Sam’s parents flawed from making them downright unlikable and incompetent at times.

Elsa is especially contemptible in some episodes, since she’s neurotic to the point of being borderline insane (this may be an intentional nod as to where Sam’s autism could have come from in his genetics), especially since the show can’t seem to decide whether Elsa is anxious over Sam growing up and not needing her, or Sam needing her too much, depending on the scene. Atypical also makes the stupendously misguided decision to have Elsa pursuing a covert affair with a free-spirited bartender named Nick, played by Special Correspondents’ Raul Castillo, which is never effectively explained or justified, despite the fact that the series so badly wants to portray Elsa as a victim in her own right. The resulting implication is pushing the frustrating narrative that autism destroys families on the sheer basis of what it is, and that’s a very worrying message to be sending in a show that’s supposed to be preaching tolerance of those on the spectrum. 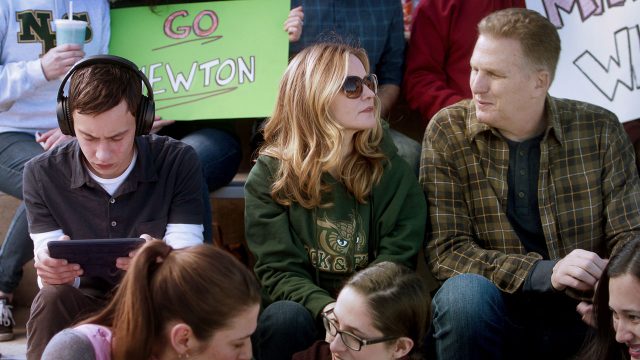 Gilchrist’s performance has also come under fire in certain autism circles, since, to be honest, it does indeed flat out misrepresent high-functioning autism at times, veering uncomfortably close to what could be considered, “Aspieface” in a few less accurate scenes. To be fair however, Gilchrist himself is not the problem, since, in following the script and direction that he was given, he does do his job well, managing to create a character that feels mostly believable, outside of these problematic moments. Things like Sam’s frequent fixation on penguins and Antarctica as a stress management mechanism are accurate and well done, for example, as is the idea of Sam trying to perform ‘replacement behaviours’, to keep himself on track in terms of functioning in society. Even things like Sam being caught on the bus chuckling to himself at idle thoughts, finding strong lights and noise to be painful and overwhelming, or frequently getting anxious and running away from disagreeable social situations, feel pretty accurate to the experience of struggling with high-functioning autism, and I would know.

The real problem, again, is the fact that Atypical’s writing is sometimes slightly to moderately faulty. There’s several moments of contrived drama involving Sam that just completely don’t work, since they really have to strain to make improbable things happen, at worst contriving actions and behaviours that people with high-functioning autism generally don’t actually display. The most blatant example of this are the times where Sam actually throttles and grabs people that are making him uncomfortable in some way, which, for an eighteen-year-old that has high-functioning autism, feels too heavy-handed and inaccurate. People like me on the higher functioning end of the spectrum do sometimes react badly when we’re uncomfortable, but by the time we’re eighteen, even sixteen, we definitely understand that doing things like locking annoying people in our closet, or pulling someone’s hair because it’s hitting us, is wildly inappropriate and invasive. The fact that Sam doesn’t seem to understand this merely appears to indicate that his parents are inept, and while they do tell him not to do those things in the moment, they never seem to actually punish him or properly discipline him either. Again, sending the message that autism is an emotional and social ‘get-out-of-jail-free card’ is really not a good idea for a dramedy series that clearly wants to help people cope with dealing with autism in the real world, especially parents. 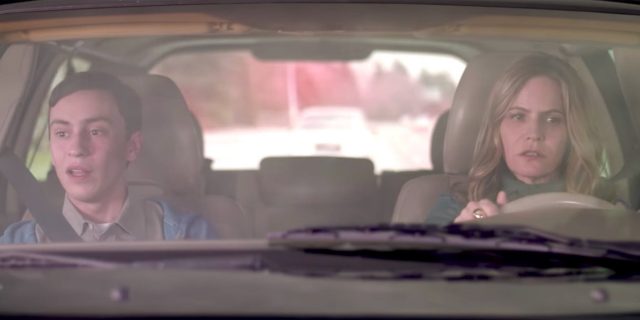 Finally, a major arc with the series is Sam’s budding love life, and thankfully, this is generally done significantly better than some of the less successful autism commentary. Encouraged by Doug and his perpetually horny friend and co-worker, Zahid, played by Nik Dodani, Sam navigating the woes of trying to get a girlfriend is generally done with effective heart and humour. Things like Sam falling in love with his young, attractive therapist, Julia, played by Amy Okuda, make sense, as does Sam not putting together when he’s being invasive or accidentally misogynistic. That’s a lot closer to an effective portrayal of someone struggling to learn to date while having high-functioning autism. Even Sam’s eventual ‘practice girlfriend’, Paige, played by Jenna Boyd, is mercifully not portrayed as idealized or flawless, having her own shortcomings and annoyances that candidly and accurately portray a youthful relationship shared between two eccentric teenagers.

Atypical ultimately gets more right than it does wrong, but its first season does take some considerable missteps with its depiction of autism, and how it’s best approached in a family environment. Every person with autism is unique, so it’s likely that even those with exposure to autism in their daily lives will have varying opinions on certain elements of the series, but that doesn’t change the fact that Atypical’s flaws will be more apparent if you do have exposure to autism, or are on the spectrum yourself, as I am. Fortunately, even the show’s less effective dramatic writing has plenty of opportunity to improve in potential future seasons, especially since the cast is well-chosen, and many of the fundamental ideas behind the series, particularly Sam’s love life, are plenty sound. I imagine that, should Atypical get a second season (and I’d be surprised if it didn’t), it will probably be a tighter, better season, but if you’re looking for a family sitcom with a bit of a different theme, Atypical is worth the quick binge-through, providing an imperfect, but still loving look at one of our modern world’s most fascinating psychological conditions.