Max may have been the focal point of Life is Strange, but she wasn’t the only interesting character with a story to tell. In fact, her longtime friend Chloe — the teenage angst-ridden stoner with colourful hair — ended up being someone who lots of folks identified with and wanted to learn more about. Furthermore, as the story progressed we learned that Chloe was good friends with Rachel Amber, whose disappearance fueled the game’s mysterious plot.

For the above reasons, Square Enix thought it smart to develop a prequel story that would focus on Chloe and her relationship with Rachel. Deck Nine was then signed on to helm the endeavour, which has just debuted its first of three parts.

Referred to as “Awake,” this inaugural episode of Life is Strange: Before the Storm is full of character development, which some may find bothersome. Then again, the original game was heavy on that as well, and it never hurt it any. As such, while this debut may be a bit on the slow side at times, there’s reason for it, especially since it’s easy to tell that things are building towards something big. Getting to know this version of Chloe is also a treat, as is seeing how her relationship with Rachel Amber began.

Like that which came before it, Before the Storm is dialogue heavy. This new tale is also without any sort of obvious special powers — at least to this point — as Chloe is presented as a normal girl who’s had a rough go in life since losing her beloved father at a young age. Here, we find the now brown haired sixteen year-old as she tries to put the pieces of her life back together, all while dealing with her mother moving on through a new relationship with a strict army man. This means lots of the aforementioned angst, some sadness and coping mechanisms that come in the form of sarcasm, alcohol, cigarettes and drugs. Hell, she even has a notebook that contains letters to Max, whom she feels abandoned by.

What Chloe brings to the table is her great wit, which is taken advantage of through both sarcastic conversational options and a new feature that lets her enter into argumentative ‘battles’ against others. When this occurs, a meter appears along with three different dialogue options. Your goal is to listen to what the other person — be it a bouncer, her mother’s boyfriend or her principal, for example — says, then use their words against them in an insulting way. Sure, this mechanic is a tad on the juvenile side, but it fits Chloe’s character well. One must also remember that we’re controlling a sixteen year-old girl here, which adds credence to this type of behaviour. The same is also true of the game’s collectibles, which take the form of optional marker graffiti, each of which offer the player two different choices.

If the idea of those ‘battles’ concerns you, know that they seem to be optional — at least, for the most part. Also take note of the fact that while they do exist, they’re not the central focus of this game. In fact, most of Life is Strange: Before the Storm‘s dialogue is exactly as you’d expect: normal and choice based, with teenage issues thrown into the mix. It’s also well written, which carries on a trend that was started with the first, DONTNOD developed game. 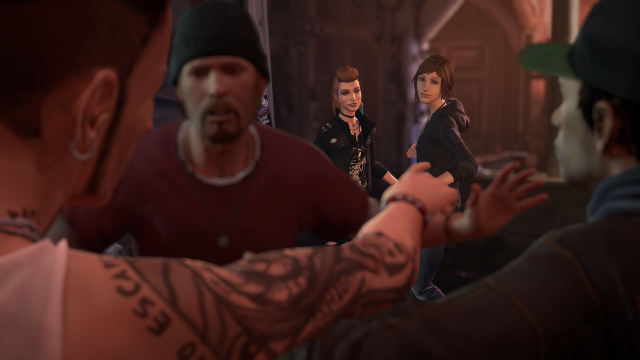 Awake begins with Chloe playing chicken with a train, then almost immediately has her getting into trouble in a dangerous backwoods establishment. It’s there that she meets Rachel Amber, and the two become fast friends with the potential for something more. The rest of the episode then consists of Chloe coming to terms with what it all means, all while dealing with the issues that reside both at home and at school.

My greatest takeaway from all of this is the realization that Life is Strange is in good hands at Deck Nine. If you were worried about a new developer being handed the reigns — for this one miniseries at least — don’t. Before the Storm is, above all else, stunning and beautifully presented, with great performance on the Xbox One. It’s so beautiful, in fact, that it can be easy to forget that it’s a video game, as opposed to an animated movie of some sort.

What may bother some, however, is the fact that Chloe isn’t voiced by Ashly Burch this time around, as the result of a strike. The actress was apparently heartbroken regarding the situation, but gamers should not be. Although Ms. Burch did a wonderful job, her replacement (Rhianna DeVries) steps in and does the same. Sure, the voice isn’t exactly the same, but only the diehards will really notice. This is also a younger version of the character, so it makes sense that her voice would sound a bit different anyways.

Alas, although Life is Strange: Before the Storm is only one episode in, with two more to follow, it’s already shaping up to be another home run for Square Enix. “Awake” is a very strong debut, which sets an interesting tone and does a good job of bringing us back to Arcadia Bay, Oregon. After seeing its credits roll, it’s hard not to crave more, because everything that happens suggests that we’re in for another very interesting ride.

Life is Strange: Before the Storm - Episode 1: Awake Review
Awake is a stunning, polished and immersive debut that sets Life is Strange: Before the Storm off on the right foot. Although it's a bit slow at times, it's a very strong opening episode that will leave you craving more.
Storyline84%
Audio88%
Visuals91%
Gameplay82%
The Good Stuff
The Not-So-Good Stuff
2017-09-02
86%Overall Score
Reader Rating: (0 Votes)
0%