NOTE: This review may contain mild spoilers for the first season of Amazon’s, “The Tick.” That said, the review is written to accommodate those who have not yet watched the series, and as such, will avoid discussion of major plot developments.

With superheroes continuing to grip modern pop culture in a tight stranglehold, the face of super-powered satire has inevitably changed from the past few decades. This however invites the perfect challenge for one of the most beloved cult superhero franchises of the modern era, The Tick, first brought to us by cartoonist, Ben Edlund for New England Comics in the late 80’s. Previously starring in an animated series during the 90’s, and an all too short-lived live-action series on FOX in the early 2000’s, The Tick has surprisingly sat out most of the modern superhero boom, despite repeated efforts to revive Patrick Warburton’s former live-action take on the character from the brief FOX series.

Finally though, the time has come for the gigantic blue-suited knucklehead to return to the small screen! Granted, Warburton isn’t reprising the role for this rebooted series, sadly (though he does serve as a producer), with starring duties in this new live-action The Tick series instead falling to Guardians of the Galaxy’s Peter Serafinowicz. This latest reboot of the character also brings the titular oblivious superhero to another all-new world with (mostly) all-new villains and an all-new flavour, though he is of course once again joined by his faithful moth-themed sidekick, Arthur, now played by Griffin Newman. In fact, it’s Arthur that’s the true main character of this new take on The Tick, with Serafinowicz’s Tick instead serving as an unlikely mentor and frequent source of annoyance to Arthur, once again a lowly accountant who wants to do good for the simply-named ‘The City’, despite being an unimpressive underdog that fails to compare in any way to the genuine superheroes that populate his world.

Given that this second live-action The Tick series is exclusively offered to stream on Amazon Video, it also presents an opportunity to go darker with the characters and the satire, and that chance certainly isn’t missed! This new The Tick series is aimed squarely at adults, complete with f-bombs, some over-the-top bloody violence, and a few instances of pretty risque humour, even compared to the prior The Tick adaptations. Disappointingly, The Tick and Arthur thus lose their goofy catchphrases (yes, sadly, there’s no, “SPOON!” this time, at least not yet), but this is instead replaced with a more ominous psychological conflict, namely that Arthur isn’t mentally stable, and may initially be imagining The Tick entirely. This is actually an interesting new direction that fits well into the more sophisticated modern era of superheroes, while calling back to Arthur’s implied mental problems from the source comics, especially since original The Tick comic creator, Ben Edlund serves as creator, writer and executive producer of this rebooted live-action series!

One of the small disappointments in an otherwise strong first season for The Tick however, beyond the fact that it only comprises a disappointingly scant selection of six half-hour episodes, is the fact that this psychological torment with Arthur is quickly abandoned after the first couple of episodes. The question of The Tick’s validity as a real person is made bluntly clear, and from there, The Tick dives headlong into instead proving why Arthur’s paranoia and obsession may just be the key to saving The City from returning Tick nemesis, The Terror, now played by comic book adaptation regular, Jackie Earle Haley. For what it’s worth though, both Haley and Serafinowicz completely steal every scene they’re in, even though they disappointingly don’t share any scenes with each other quite yet. If you really miss Warburton as The Tick though, it’s nonetheless very comforting to see that Serafinowicz is just as fun and kooky in the part, perfectly embodying The Tick’s goofy, single-minded charisma, even without having to rely on quirks like the character’s catchphrases in this case. 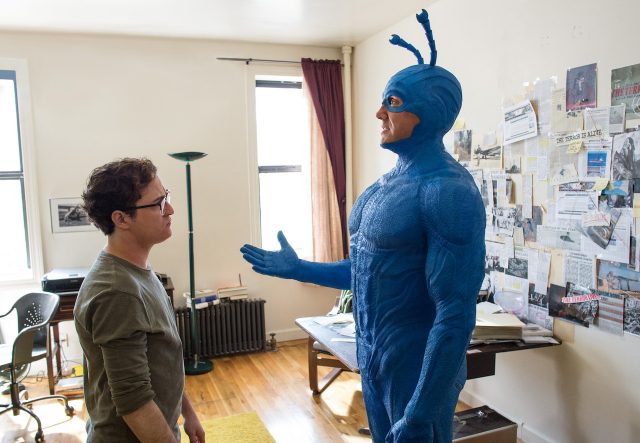 Like I said, we do at least get some new antagonists in this latest TV reboot of The Tick beyond The Terror too, between murderous anti-hero, Overkill, played by Scott Speiser, electricity manipulating gang lieutenant, Ms. Lint, played by Yara Martinez, and The City’s current most dangerous crime boss, Ramses IV, played by Michael Cerveris. It’s difficult to go into these antagonists much without spoilers, but their implied agenda nicely ties together both The Terror and Arthur, with Arthur being the one denizen of The City who is convinced that The Terror has faked his death, and is still pulling the villains’ strings from afar. All of the villains are fun, and many of them are quite hilarious, though it’s Ms. Lint that currently leaves the biggest impression, since she’s given the most development, and carries the most screentime in this debut season.

Since Arthur now takes on the more prominent main character role in Amazon’s take on The Tick, Arthur’s family also takes on a bigger part in the story, most notably Arthur’s sister, Dot, played by Valorie Curry. Dot was mentioned to exist in the original The Tick comics, though she wasn’t Arthur’s only sibling in that case. In this series however, Dot is Arthur’s one and only sister, as well as the person who is legally responsible for Arthur, despite Arthur still managing to at least hold down a job as an accountant. Dot, meanwhile is studying to be a doctor, and is helping to pay her way by assisting with patching up criminals that run afoul of the new batch of heroes that have suddenly shown up in The City, despite it being without a superhero presence for years before The Tick and Overkill show up. There’s a lot of depth and drama to the relationship between Arthur and Dot, though this does feel like something that is intentionally being held back for future seasons, where it will continue developing a focus as Arthur sinks deeper into his new superhero identity as… simply Arthur, once again.

Even if it doesn’t fully commit to its more interpretive psychological element with The Tick and Arthur, Amazon’s live-action reboot of The Tick is nonetheless a lot of fun and very much worth checking out, presenting an effectively darker, yet no less enjoyable take on the character and the franchise. There’s only so much that six half-hour episodes can accomplish, but beyond the disappointing brevity of this first season, this is absolutely the triumphant live-action return of The Tick that we’ve been waiting for for just over fifteen years! The humour is consistently on point, the action is surprisingly entertaining, and best of all, The Tick provides yet another new take on this world, with enough faithful and familiar elements to still make it feel like it’s in touch with its roots. The modern ubiquity of superheroes only makes this series stronger, and fortunately, the show wisely understands that we’ve come to take superheroes more seriously than we did before, thus tweaking the humour accordingly.

This new The Tick series sometimes comes from a more startlingly real place than you would expect, but that just gives us a whole new supply of pitch dark humour to anticipate in seasons to come. The fact that Serafinowicz and Newman embody the roles of The Tick and Arthur respectively so perfectly in turn only makes that prospect all the more exciting. I certainly can’t wait to see what’s next for this eccentric duo!

The Tick [2017]: Season One Review
Amazon's rebooted live-action The Tick series is darker and has more biting satire behind it, but it's no less fun, presenting a highly enjoyable new take on the big blue hero and his humble sidekick!
THE GOOD STUFF
THE NOT-SO-GOOD STUFF
2017-09-07
85%Overall Score
Reader Rating: (0 Votes)
0%