UPDATE: With the televised broadcast of these two back-to-back episodes now having occurred on ABC/CTV, it must be noted that the televised renditions of these episodes contain about ten total minutes of extra footage not present in the previous IMAX showcase. These additional moments introduce a new human character on Earth named Louise, who spots Gorgon’s hoof from lunar probe footage outside of the city gates, and ends up being put on leave after discovering and communicating evidence that something has come to Earth from the moon.

There are also a few extra scenes on Attilan, showing Maximus murdering the head of the Genetic Council, and intimidating its other members. Finally, Crystal also appears to have been given some additional development, namely with the reveal that hers and Medusa’s parents were murdered by Black Bolt’s and Maximus’ parents, Attilan’s previous rulers, in a failed coup.

While these scenes add some further fleshing out and intrigue, they don’t substantially impact the quality of the show, and thus, this review’s score and final verdict is unchanged.

NOTE: Full spoilers for these two episodes of, “Inhumans” are present in this review

Despite continued success with being portrayed as surrogate mutants for the Marvel Cinematic Universe on ABC’s Agents of S.H.I.E.L.D. series, the iconic ‘Inhumans’ as we know them from Marvel Comics lore, specifically the ‘Inhumans Royal Family’, has had a tough time being translated into live-action. Originally announced as a Marvel Studios feature film set for a 2018 release, Inhumans was later delayed to a 2019 release to follow that year’s fourth currently-untitled Avengers sequel. Then, following the deal made between Marvel Studios and Sony Pictures to share the film rights to Spider-Man, thus bringing the Web-Slinger into the MCU, Inhumans disappeared from Marvel Studios’ release slate entirely, with its 2019 release period now being occupied by a currently-untitled Spider-Man: Homecoming sequel.

It seemed at first that there was just no room for the Inhumans Royal Family in MCU canon for a time, but that finally changed, when the planned movie was re-tooled into a television series, following the route of another failed Marvel Studios movie project, Runaways. Planned as an ‘event’ series on ABC, akin to the now-wrapped Agent Carter, Inhumans is taking the place of MCU-set veteran series, Agents of S.H.I.E.L.D. on ABC’s Fall lineup, with Agents of S.H.I.E.L.D. now likely being withheld until 2018. Even then however, ABC and Marvel have collaborated with IMAX to exclusively release the first two episodes of Inhumans almost a month early in IMAX theatres, giving Marvel fans an early look at one of the biggest and most ambitious television projects for the MCU yet, even considering the likes of the recently-released The Defenders on Netflix! 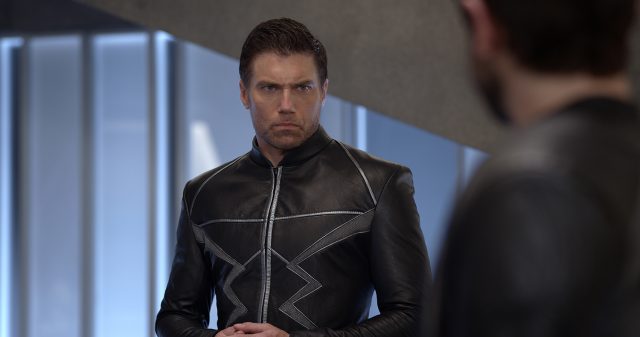 But, sadly, you’ll probably wish that they hadn’t. In its first two episodes, which are strung together for the early IMAX release, Inhumans is pretty shaky, having a handful of good moments that are sadly offset by numerous frustrations. Granted, some of the backlash to Inhumans has been pretty harsh, no doubt motivated by anger over Marvel Studios’ dropping of the feature film plans, and the second episode of the series at least does present some decent promise for a good payoff later, once this show has made it to the small screen airwaves. Even then though, it’s difficult to deny that quickly and awkwardly tossing the Inhumans Royal Family into the MCU canon as television characters feels like a mis-step, where Marvel possibly should have just stuck it out and waited until the 2020’s to get the Inhumans movie off the ground, if they had to.

Alas, no, we instead have this Inhumans TV series, which is acceptable enough, but well beneath the current standard of Marvel Television as it stands. 2017 has been a fairly rough year for Marvel Television to be sure, one that was at least elevated by the standout latter two story pods for the fourth season of Agents of S.H.I.E.L.D., as well as X-Men-inspired Fox collaboration, Legion debuting with a fantastic first season on FX. With both the first season of Iron Fist and a good chunk of The Defenders disappointing fans from Marvel’s Netflix slate though, it compounds the frustration to see Inhumans start off on such a shaky foot, especially when former Iron Fist showrunner, Scott Buck was pulled off that series to now oversee this one, as if Marvel Television was just desperate to push Inhumans out the metaphorical door for some reason. Even the show’s thankless title sequence feels bored, and like it’s blatantly not trying.

If you’re not familiar with the Royal Family, Inhumans stars Anson Mount as Black Bolt, and Serinda Swan as Medusa, the respective king and queen of the pure-blooded Inhumans, a race of sub-humans with superhuman abilities that are activated by exposure to Terrigen Mist, who were experimented upon by alien race, the Kree many years ago. With mutants off-limits to the MCU at this point, due to Fox holding the X-Men film rights, half-blooded Inhumans, now clarified to only possess partial Inhuman genes, have been interesting surrogate mutants over on Earth during Agents of S.H.I.E.L.D., but in the case of the pure-blooded Inhumans, they live on the dark side of the moon, within a hidden city called Attilan. As the humans move closer to discovering Attilan however, Black Bolt’s brother, Maximus, played by Game of Thrones’ Iwan Rheon, grows restless, urging the king to entertain the idea of bringing pure-blooded Inhumans to Earth. Black Bolt refuses however, since Attilan operates on a strict caste system, where those with unremarkable or useless powers are sent to the mines to work their whole lives, mining valuable Terrigen for future Inhuman power activation.

There is potential for an interesting conflict here, as we interpret whether it’s Black Bolt or Maximus that truly has the right idea for the Inhuman populace, and this is made all the better when we see that Black Bolt commands with strength, but Maximus has the love of the people. Sadly though, this conflict is quickly hamstrung by Inhumans’ planned eight-episode length, as a coup is quickly put into motion, with most of the core Inhumans nobles from Marvel Comics lore forced to beat a hasty retreat to Hawaii, courtesy of their large teleporting pooch, Lockjaw, who is given no explanation for now. Only Crystal, Medusa’s sister, remains on Attilan, spending the entirety of these two episodes as a prisoner, where she unfortunately ends up the most boring character to start, despite having the interesting ability to manipulate earth, fire, wind and water alike.

Worse than sticking Crystal in the thankless role of being a damsel-in-distress however, a huge disservice to her rich history from Marvel Comics lore, is the show quickly finding an excuse to shave off Medusa’s hair, the source of her superhuman abilities, in a truly facepalm-worthy moment, even considering some of their dodgy TV-level effects. Without her hair, Medusa is given nothing to stand out with, only identified as being the sister of Crystal and the wife of Black Bolt, and with Crystal being stuck as a damsel, that point isn’t going to help Medusa much. Medusa thus spends all of these two episodes desperately trying to contact Black Bolt, who is stranded on a different corner of Hawaii, where he’s made into more or less a joke for now, which will probably anger many Marvel fans, despite the MCU’s well-established history of humourous ribs on characters.

You see, the deal with Black Bolt is that he’s unable to speak, since his super-powerful voice is extremely destructive and uncontrollable, forcing him to communicate in a sort of sign language that he developed in the past with Medusa. This could have been a cool hook, and Mount actually does alright at capturing the mighty presence of Black Bolt, even if his personality is a bit wanting for now, much like the other Inhuman characters. It’s Rheon’s Maximus that’s one of the biggest standouts, but another current standout among the supposed ‘good guys’ is Karnak, played by Ken Leung, who has the ability to sense physical, mental and/or emotional weakness in anyone. This is not only a cool ability, one that’s used for both effective humour and action, but is even used for some surprisingly clever directing tricks and the like. In fact, Karnak only has one dodgy moment in these first two episodes, where he stupidly fails to sense a loose foothold on a cliff and knocks himself out (I guess his powers don’t apply to inanimate terra firma?), but beyond that, he’s probably one of the show’s best characters for now.

The only other character of note is Gorgon, Black Bolt’s cousin and the leader of the royal guards, who has large hoofs that can cause destructive miniature earthquakes. Like the other Inhuman nobles though, Gorgon isn’t allowed to do anything truly interesting in these first two episodes, instead hanging around with a group of Hawaiian citizens who are more or less there to acknowledge some of the events with the Inhuman epidemic on Agents of S.H.I.E.L.D. The Inhumans Royal Family are such cool and interesting characters, but it’s frustrating to see this show having them firmly going through the motions to start, setting up a cliched coup with cliched characters, which frustratingly demands that you come back to ABC (or CTV for us Canadians), to see if it gets more interesting. Naturally, this isn’t the best first impression. Adding insult to injury too is the fact that the series doesn’t really benefit from the IMAX treatment at all either. The bigger screen makes some of the wider Hawaiian shots look great, to be fair, but it also draws more attention to the visual effect limitations on the characters, even if their wardrobe at least looks the part.

Thus, no, I sadly can’t recommend that you take a trip to an IMAX theatre to watch two television episodes that don’t do a great job of selling you on this new TV pitch for Inhumans. Maybe the show will get better, and in fact I hope it does, because the Inhumans Royal Family deserves a big spot in the MCU. As it stands though, Inhumans isn’t off to a great start, and feels like it exists more out of obligation than genuine inspiration. There are some funny moments with certain scenes, at least one cool action scene with Karnak, and the Hawaiian locations at least look nice, but the story is a bore, the characters are too often flat, and there just isn’t a sense of justification for this series right now. The MCU would have been just fine without the Inhumans Royal Family for the time being, and that indicates a big pitfall of introducing new characters to the MCU half-heartedly; You only really get one chance to do it. There are no do-overs with MCU characters, so if you screw it up, you can’t go back and fix it without some serious retcon gymnastics. Maybe Inhumans will get better when the rest of it unfolds on the small screen, but for now, I can’t help but wonder why Marvel Television even bothered if this is the best they could do with these characters.

Inhumans Episode 1&2: "Behold... the Inhumans/Those Who Would Destroy Us" Review
Inhumans sadly gets off to a rather shaky start in its first two episodes, failing to justify the IMAX release, and dragging down most of the story with flat characterization and dull pacing.
THE GOOD STUFF
THE NOT-SO-GOOD STUFF
2017-09-08
60%Overall Score
Reader Rating: (0 Votes)
0%