If you’ve had some trouble trying to track down a Nintendo Switch console to purchase (and if so, you aren’t the only one!), then Nintendo may have some good news for you. If you’ve already got your eye on Super Mario Odyssey in particular, then you may want to wait for the Holiday season to secure your Switch! Nintendo took an opportunity towards the end of today’s Nintendo Direct broadcast to unveil a special Super Mario Odyssey hardware bundle for Nintendo Switch, marking the console’s second bundle option that includes a game, after the previous Splatoon 2 bundle from July.

The Super Mario Odyssey Nintendo Switch bundle is launching on the same day as the game itself, on October 27th of this year, and will include a Nintendo Switch console that comes packaged with a free digital copy of Super Mario Odyssey! The console will also include two Mario-themed Red Joy-Con controllers, complete with the expected Joy-Con Grip, and will also offer a Mario-themed collectible carrying case for the Switch’s handheld unit, for when you take it on the go.

Disappointingly, the Super Mario Odyssey bundle wasn’t yet given a price. There’s also no guarantee that it won’t be plagued by the same infamous stock shortages that the Nintendo Switch hardware has suffered from in general, since the hardware first released at the start of this past March. That said, multiple hardware options should help to alleviate some of the Switch’s stock deficiencies during the Holiday season, when demand for the Nintendo Switch is likely bound to increase further. 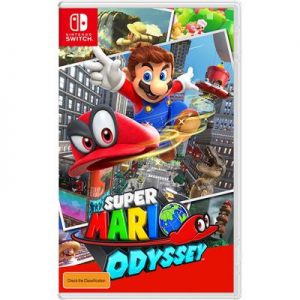 New gameplay details were also confirmed for Super Mario Odyssey during today’s Nintendo Direct broadcast, including all-new stages and story elements. The game will see Mario traveling to various themed kingdoms with the aid of sentient hat spirit, Cappy, and will also feature the return of original Mario flame, Pauline in a key role. The game will also release alongside three wedding-themed Amiibo figures, which will depict Mario, Peach and Bowser in wedding attire, with each figure unlocking unique benefits when scanned on a Switch controller’s NFC Reader during gameplay of Super Mario Odyssey.

Keep leaping to Eggplante for all major news and updates on Mario games.