If you’re itching for Japanese RPG’s to play on your Nintendo Switch, then you’ll likely want to pay a visit to the Switch eShop soon. Square Enix is releasing a free demo of their upcoming classic-style RPG, Project Octopath Traveler, which will give players a taste of the gameplay promised for this upcoming epic. Better still is, if you want to have at least some small say in the direction of the game, Square Enix will also be releasing a survey to players who take part in the demo, giving you a chance to provide feedback on the experience. 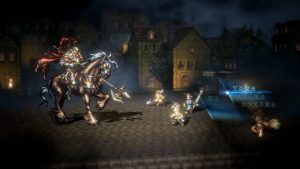 Project Octopath Traveler comes from the producers behind Nintendo 3DS hit, Bravely Default, offering a similar nostalgic presentation. The game blends three-dimensional environments with two-dimensional art, in a hook that the developers have dubbed, “HD-2D.” Project Octopath Traveler will offer traditional turn-based combat with multiple party members, while offering several unique characters with specified aptitudes and play styles. Each of the eight main characters also promises a different story path to follow, potentially enhancing replayability within the game’s deep storyline, while seemingly giving players some degree of agency over how their adventure proceeds.

Today’s Nintendo Direct proved to be quite a robust buffet for RPG fans! Not only was Project Octopath Traveler featured, but there were also lengthy previews for Nintendo’s own Xenoblade Chronicles 2 and Fire Emblem Warriors on Nintendo Switch, while two upcoming Atlus RPG’s, Etrian Odyssey V: Beyond the Myth and Radiant Historia: Perfect Chronology also received previews for Nintendo 3DS, alongside Nintendo’s own highly anticipated 3DS RPG follow-ups, Pokemon Ultra Sun and Pokemon Ultra Moon. Square Enix also showed off another upcoming Nintendo Switch RPG, Lost Sphear, releasing this January, while also confirming for the first time that their PlayStation 4/PlayStation Vita spin-off, Dragon Quest Builders would also be releasing for Nintendo Switch next year. Finally, a Western RPG got some much-needed press as well, as Nintendo finally confirmed that we can expect Bethesda’s Nintendo Switch port of The Elder Scrolls V: Skyrim on November 17th.

Keep traveling to Eggplante for all major news and updates on Nintendo Switch games.