Fear the Walking Dead was very rich with engaging drama this week, now that Madison and Strand have reunited, and they’re on their way in turn to reuniting with Daniel at the dam. Walker is still trudging along in tow, but fortunately, the biggest obstacle in this week’s episode was merely negotiation and trust, as the aptly named, “La Serpiente” showcases more separate factions of characters learning to come together to solve their respective issues.

Things in this episode immediately begin strong with a first half that’s largely focused on the tense path to reaching the dam. Forced to rely on Strand, Madison and Walker have to make their way through Walker-filled highways and isolated junkyards, and that’s before they have to make their way down into the sewers, which is just as disgusting and unpleasant as you can probably imagine. Walkers have even made it into these sewers to boot, resulting in a lot of great tension and several truly effective scares, as the group must navigate a labyrinth of extra suffocating underground tunnels, complete with the undead waiting to surprise them around several corners.

Strand especially stole the show in this episode, particularly since the show wonderfully took the opportunity to highlight him as frequently the least trustworthy character. Despite being confident about his path at first, having Strand admit to Walker’s suspicions that he’s lost in the sewers was pretty unnerving, even if it didn’t take long for the group to find their way again afterward. This whole unsettling sewer trek was also very nicely capped off by an encounter with a bloated Walker plugging the way out, which Madison had to neutralize and squeamishly rip apart to create an exit, only to have the three get doused in sewer waste before a commercial break. Fortunately, all that resulted from this was Madison’s party getting pretty dirty before stumbling upon the dam.

The reunion with Daniel was just as uncomfortable as it was perfunctory too, which definitely fits with the character, especially considering how Daniel last left things with Strand. Madison manages to convince Daniel that Ofelia is alive and at the ranch however, fortunately being able to capitalize on her blunt honesty with Daniel in the past. This is enough to gain an audience with Lola, who is having her own issues with the growing rebellion that seems to be brewing over Lola’s people holding claim to the water. That aforementioned commercial break beginning with Daniel having to flee from some rioters before reuniting with Madison and Strand nicely illustrated that, with Lola’s control over the region gradually breaking down even more compared to last week’s episode.

Fortunately, the drama stayed very strong once Madison and co. actually got into the dam with Daniel, whereupon Madison tries to negotiate for water for the ranch, only to be refused by Lola, citing that the dam doesn’t need anything. The increasingly suspicious Efrain seems to be fueling these decisions, and the way that the episode had Efrain interact with Strand during a medical patch-up created a truly brilliant contrast between a known liar, and someone who may be working against Lola in a more subtle way. Strand’s scenes with Madison were equally effective, as Strand finally gets Madison to open up about what she truly wants in her life, having to put her kids aside for the first time since before she was a mother. This was also effectively timed with Lola giving Madison a tempting offer to take her family and move to the dam, even if that means abandoning the ranch and its people.

With all of these great interactions between the established protagonists of Fear the Walking Dead, the only less effective character this week was Walker, who spent most of the episode complaining and doubting Madison. Sometimes this worked, like in the sewers for example, but other times, Walker didn’t have much real justification for complaining, beyond being angry at Madison for trading his gold away without his permission. Instead of being truly threatening or intelligent, as he usually is, Walker came off as whiny and needlessly hostile this week, even going as far as to make the ridiculous accusation that Madison somehow knew that the dam would be a bust, and basically traded his gold to spite him and start a fight at the ranch. Why the hell would she do that?! Walker is supposed to be a lot smarter than this, and considering the fact that he’s been a pretty great antagonist all season up to this point, it was frustrating to see him become a bit of a moron this week. 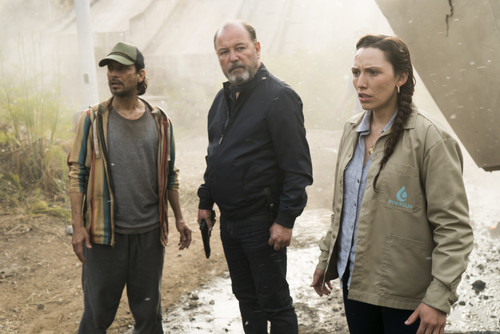 Fortunately though, Strand is inspired to fake an attack on the dam’s water truck so that Lola capitulates to Madison’s demands for water, in exchange for guns that she can use to defend the dam. The condition that Ofelia be brought to the first exchange of guns and water is also very promising, even if it looks like we might be waiting a couple of weeks to see how this plays out, since next week’s episode seems to be focused entirely on events at the ranch while Madison and Walker are away. Regardless, this was a smart conclusion that brought out the best of both Madison’s and Strand’s unique talents, allowing them to satisfyingly pull up to a hitchhiking Walker in a fully-filled water truck right as the episode ends. Serves him right for being a tool, frankly.

“La Serpiente” represents another great slice of Fear the Walking Dead firing on all cylinders, as the episode consistently crackled with unrelenting drama, intrigue and tension. The journey to the dam proved just as engaging and satisfying as the negotiations that will finally see Broke Jaw’s water reserves restored, which also tease the added bonus of finally reuniting Daniel and Ofelia for the first time since midway through the previous season. Again, it looks like we’ll have to wait an extra week to see this play out, since next week’s Broke Jaw-focused episode seems to take place concurrently with this one, but it’s nonetheless exciting to see that the back half to Fear the Walking Dead’s third season is shaping up to be just as riveting and rewarding as its front half!

Fear the Walking Dead 3.11: "La Serpiente" Review
Fear the Walking Dead provided lots of standout drama and tension this week, delivering both a thrilling trip to the dam, and difficult, but rewarding negotiations for its precious water.
THE GOOD STUFF
THE NOT-SO-GOOD STUFF
2017-09-18
91%Overall Score
Reader Rating: (0 Votes)
0%