After the highly successful debut season of Legion on FX earlier this Spring, Marvel and the Fox Entertainment Group have now launched their second planned television spin-off to 20th Century Fox’s beloved franchise of X-Men movies. The Gifted brings the X-Men film universe to FOX, as one of the most anticipated new shows for the 2017-2018 season overall, having risen from the earlier planned and aborted FOX pitch, Hellfire, which died after losing its planned showrunners to the since-cancelled 24: Legacy. The Gifted, meanwhile, was pitched and developed by Burn Notice’s Matt Nix, with Nix serving as the showrunner, and commissioning frequent X-Men movie director, Bryan Singer to direct the show’s pilot episode!

Considering all of the hype surrounding The Gifted, particularly considering that it has to follow both the huge critical and audience acclaim of Legion, while also existing as the second bridge-building effort between Marvel and Fox, there was a lot riding on this new series. Fortunately however, like Legion, The Gifted gets off to a very strong start in its first episode, and already stands as one of the strongest and most exciting new shows of the 2017-2018 season, regardless of whether or not you’re already an X-Men fan. X-Men fans will definitely get the most out of The Gifted of course, but even if you’re a more casual observer of live-action X-Men media, or are barely familiar with Marvel’s celebrated mutant heroes at all, there’s plenty to like in The Gifted, which succeeds as a reliably engaging thriller series on its own merits as much as it does a worthy addition to Marvel’s growing library of compelling television shows.

Of course, the wrinkle with The Gifted is that it takes place at a point in one of the X-Men movie timelines (2014’s X-Men: Days of Future Past and its timeline reset makes The Gifted’s exact place in Fox’s X-Men film universe canon a bit vague, beyond being set in the near future), where both the X-Men and the Mutant Brotherhood have seemingly vanished from existence. Whether it leads into the dystopian mutant-hunting apocalypse of X-Men: Days of Future Past or the revised timeline finale of Logan (though the former seems to be more likely for now), The Gifted revolves around a group of secondary mutant protagonists, who are struggling to survive in a world without the X-Men to protect them, or the Mutant Brotherhood to help fight for them.

This first pilot episode of The Gifted pretty much hits the ground running in establishing everything that viewers need to know, without feeling hasty or over-stuffed. Things begin with the adolescent Strucker family children, Lauren and Andy, played by Natalie Alyn Lind and Percy Hynes White respectively, inadvertently causing a bunch of destruction at their high school, after Andy’s mutant powers manifest during an attack by bullies. Since Lauren is already a mutant, and is forced to use her powers to help Andy escape, the two end up attracting the attention of Sentinel Services, a new TV-friendly take on the mutant-hunting Sentinels from Marvel Comics lore. In this case, ‘Sentinel Services’ consists of human agents that use smaller mutant-hunting robots to capture dangerous and volatile mutants, and detain them without trial, which some radical anti-mutant laws in the U.S. allow them to do. 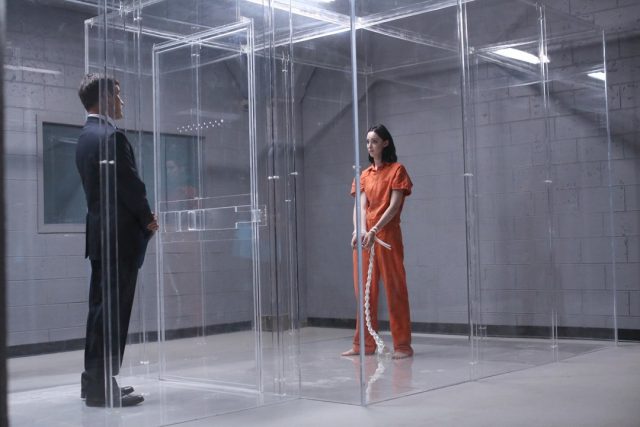 Again, it’s heavily implied that the fallout of the original X-Men movie trilogy’s events pushed the U.S. over the edge in terms of regulating mutants, leading to the nasty scenario of the Strucker family having to go on the run to avoid government imprisonment. Fortunately, there’s also a nationwide underground mutant network that family patriarch, Reed Strucker, played by Stephen Moyer, is able to make contact with, led by light-manipulating mutant, Eclipse, played by Sean Teale. This group is effectively established when they rescue Blink, a portal-generating mutant now played by Jaime Chung (Blink was portrayed in a different form by Bingbing Fan in X-Men: Days of Future Past, suggesting more evidence that The Gifted could indeed lead into that movie’s aborted mutant-oppressing future), in the opening section, even if this does lead to another recognizable mutant in the group, Polaris, being captured by the government.

Polaris’ capture allows Reed to broker a tense deal with Eclipse to sneak his family across the border to Mexico, where mutant laws are allegedly more lenient, in exchange for giving Eclipse the means to rescue Polaris. Naturally though, Sentinel Services intrudes, forcing some blind portal-building by Blink so that everyone can escape, even if Reed ends up shot and can’t rejoin his family in the process. The episode ends here, firmly implanting the Strucker family with this mutant network, and as I said, this first episode of The Gifted pretty effectively sets the stage for the series, while also nicely getting viewers up to speed on what’s been going on with mutants, and how bad things are with managing mutants in American society at this point, even if you’ve never seen any of Fox’s X-Men movies.

While The Gifted offers mostly exactly what you would expect in a primetime X-Men spin-off series made for FOX, and definitely doesn’t carry the same mind-blowing novelty of Legion from earlier in the year, it does accomplish pretty much everything it sets out to do remarkably well. As far as gripes in the episode go, there aren’t many to speak of. I suppose that not all of the Strucker family drama perfectly gels at this point, with Lauren’s and Andy’s bickering feeling particularly forced at times. The episode also doesn’t seem to have that much time to mine drama from the fact that Reed has served as a prosecutor that specializes in throwing mutants in jail, only to have to change his way of thinking when his children are outed as mutants. Maybe this conflict will go somewhere interesting later in the season, but for now, it seems like Reed and his wife, Caitlin, who is played by Agents of S.H.I.E.L.D. alum, Amy Acker, are completely on the same page, which feels like a bit of a missed opportunity.

Considering the very large ensemble of characters that The Gifted has to establish in this episode however, complete with being restricted to B-list mutant protagonists that only avid fans of Marvel’s X-Men comic books would probably recognize (even if Blink did appear in X-Men: Days of Future Past, albeit played by a different actress), the show definitely does an amazing job of avoiding feeling over-crowded, or glossing over important details. Immediately, these personalities are compelling and engaging, with just the right amount of information given to each lead character on display. The strong character work, the exciting pacing and the sharp presentation all lead to The Gifted standing tall in its first episode, and living up to the hype in pretty much every respect. Again, even if you’re not already an X-Men fan, The Gifted seems to be shaping up as one of the strongest new shows of the 2017-2018 season, and anyone looking for some good excitement should definitely tune in for it!

Pilot Review: The Gifted
X-Men spin-off series, The Gifted starts off very strong in its first episode this week, effectively living up to the hype as one of the strongest new shows of the 2017-2018 season!
THE GOOD STUFF
THE NOT-SO-GOOD STUFF
2017-10-03
88%Overall Score
Reader Rating: (0 Votes)
0%