The thing about indie games is that they tend to push boundaries in ways that many first-party titles don’t. Maybe the latest first-party jam has the flashiest visuals and the most rock-solid framerate, or the most active multiplayer servers (though PlayerUnknown’s Battlegrounds is definitely holding that crown right now), but indie titles like Studio MDHR’s Cuphead are in a league of their own when it comes to charm, inspired and unique design, and sheer brutality.

The most obvious design choice in Cuphead comes from the unique 1920’s-era toon style. Rendered at 60 frames per second, Studio MDHR uses some sort of magic and wizardry to emulate the 14 frames-per-second you’d see if you were back in the twenties. And yet, when you die in the game—and you will die a lot—it is never because the frame rate did you in or caused a stutter that made you fail. You die in this game because it’s tough as hell. But more on that later. 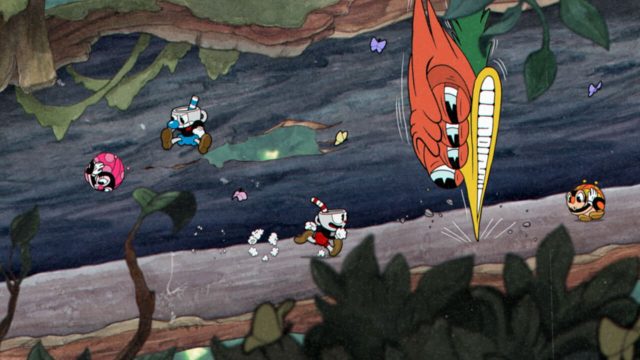 Every single character is animated with love in that Betty Boop style, and enemies are crafted with the same care and attention to detail.

The overworked shares a similar aesthetic but is actually more a free-roaming experience in which the player may find hidden paths by sneaking behind a tree or walking along the edge of the water, for example. It’s tough to describe without playing the game, so if you don’t want to read this review, here’s a spoiler: get Cuphead.

Alongside every piece of art seemingly lifted from the early part of the last century, the audio effects go right along with it. There’s a very real sense of nostalgia and retro feel that makes it easy to think you’re listening to a museum audiobook with samples from the era. To anyone walking by a television with Cuphead on it, it wouldn’t be unexpected that people assume you’re watching a cartoon from the 20s or 30s. 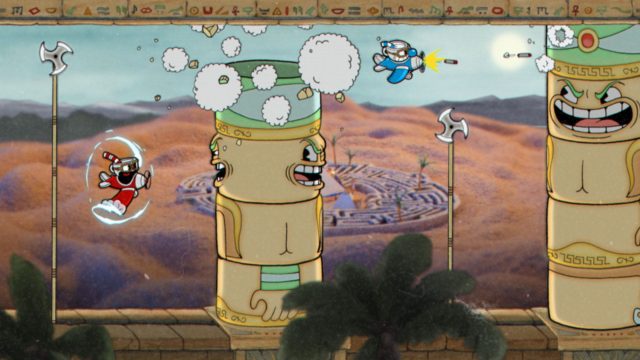 Cuphead shines in its unique and varied gameplay. There’s no shortage of different mechanics, weapons, and other elements to interact with in this side-scrolling infinite shooter.

Cuphead himself starts with a pea shooter and can upgrade his weapons a number of times to become more powerful against his foes. And he needs it; this is not an easy game.

In some stages, Cuphead pilots a plane to defeat his enemies, and this adds even more variety to the gameplay, not to mention new mechanics by which you must thwart your foes.

You begin each level with three hit points of sorts, and any three hits from enemies or environmental hazards renders the level over. It sounds like a simple and fair mechanic—and maybe it is—but the enemies are ruthless and quite adept at attacking you. 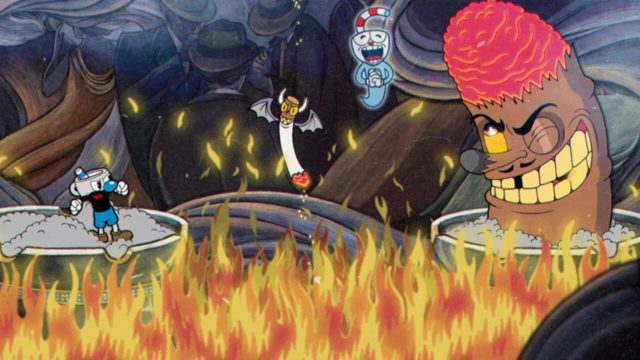 The finality of these stages culminates with boss battles that are actually a bit of a mixed bag. Most attempts will kill your character dozens of times, if not more, but there is a true sense of accomplishment once you finally manage to dispense of one. It’s also not painfully difficult to get right back to where you were in the challenge, as part of the game relies on memorization of certain boss tactics and different phases of attack that offer just a slight sigh of relief. Levels themselves, by contrast, tend to have enemies dropping in a bit more randomly.

With that said, the mix of devilishly difficult programming and the quick breaths of fresh air in boss battles have proven to be a fair blend of gameplay that challenges and rewards the player.

Cuphead is a somewhat obscure yet completely relatable game that makes it difficult to not fall in love with. It may be wise to strap a leash on your controller lest you hurl it at your television in frustration. In any case, Studio MDHR has crafted a wonderful title with a very unique charm that makes its $20 price tag a bargain for the love and effort put into creating it.

Cuphead Review
Cuphead is a uniquely crafted masterpiece with tremendous difficulty but equal reward, and is an excellent showcase of what independent game developers can do.
VISUALS100%
AUDIO90%
GAMEPLAY85%
The Good Stuff
The Not-So-Good Stuff
2017-10-08
92%Overall Score
Reader Rating: (0 Votes)
0%