Inhumans certainly didn’t get off to the best start in its two-part premiere and IMAX debut, even if it was at least watchable. The show stayed on pretty much the same note in its first new episode since that early IMAX debut as well, with this week’s, “Divide and Conquer” continuing to revolve around the Inhumans Royal Family bumbling around Hawaii, while Maximus continues to increase his grip on the throne of Attilan.

All things considered, this episode was a mild improvement over the first two, even if Inhumans is still noticeably trailing pretty much any other show that Marvel Television has produced to date. There’s still a lot of boring and/or silly filler material in several places, though fortunately, some better storylines with certain characters helped to make up for that. We also meet a new character this week, Doctor Evan Declan, a human scientist who seems to have some sort of knowledge and interest in Inhumans on Earth. Naturally, Black Bolt’s stunt with the Oahu police during the previous episode quickly catches his attention.

Among this episode’s storylines, Black Bolt’s was probably the strongest this week, as he starts interacting with other prison inmates and guards, who all seem to have some strong opinions about the damage that his powers caused. The guards naturally hate and fear Black Bolt, and are apparently so corrupt and aggressive that they almost approach the cheesiest of Orange is the New Black territory at times! Fortunately, as corny as the guards’ actions toward Black Bolt are, Black Bolt meeting and befriending another inmate named Sammy, who is directed toward Black Bolt by Declan via the phone, actually made for some solid scenes. Sammy ultimately helping Black Bolt escape with Declan, and revealing that he’s an Inhuman himself, one that was falsely imprisoned for arson when his newborn heat-generating powers accidentally burned his house down, was actually a pretty solid final twist. This nicely explained why Declan knew about Sammy, and how he could reasonably convince Sammy to help Black Bolt.

Maximus and Crystal also delivered a fairly decent, if somewhat predictable storyline this week. The best part of Maximus’ arc was the flashbacks with Black Bolt, which showed them first discovering their Inhuman abilities (or lack thereof in Maximus’ case), as children. Maximus trying to coerce Crystal to voice support for him to the Genetic Council goes about as well as you would think though, and this simply ends with an excuse to have Crystal teleport to Hawaii with Lockjaw at the end of the episode, whereupon Lockjaw is conveniently injured by an ATV, presumably leaving him unable to teleport again for the next while. I have to say that the writing in Inhumans is really problematic with super contrived turns like this, but fortunately, Maximus does at least remain one of the show’s best and most interesting characters, especially with Iwan Rheon’s effectively interpretive performance behind him. Maximus truly believes that he’s doing good for Attilan, and that continues to make him a fairly solid villain for the show, since he justifiably doesn’t see himself as the villain, and the viewer may not either. 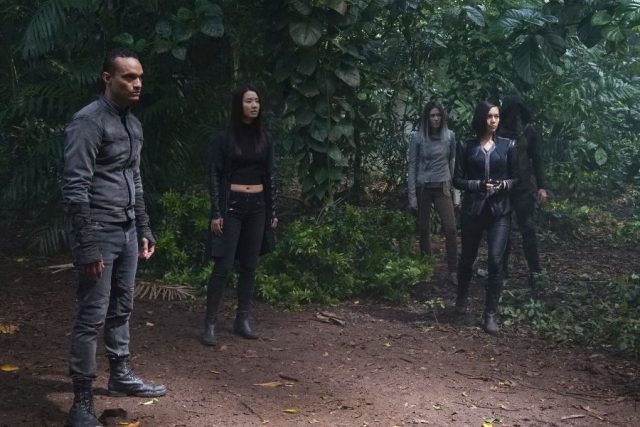 Unfortunately, Gorgon, Karnak and Medusa all drew short straws in terms of story quality this week, since their subplots largely fail to satisfy. Gorgon’s story at least delivers the benefit of a halfway decent action scene, where Gorgon and his convenient military buddies have a small scrap with Auran and some other Inhuman guards, but this simply results in Gorgon’s crew retreating, and not much else happening. I will say however that Mortus, the Cyclops-like character with uncontrollable heat vision (I’m surprised that Fox let Marvel get away with this character, frankly, especially since he doesn’t appear to exist in Marvel Comics lore), was at least a bright spot here, having a surprisingly snarky and cheeky disposition that nicely played against expectations, since he’s apparently infamous for being the Inhuman with the most volatile powers since Black Bolt.

Medusa and Karnak, meanwhile, didn’t accomplish much of anything this week. Karnak accidentally stumbles onto a pot farm and gets kidnapped, which could have been interesting, especially since his powers still don’t work, but it still smacks too much of contrivance. Medusa, meanwhile, simply bumbles around Hawaii’s city folk some more, breaking into someone’s house to get food and a change of clothes, before eventually finding Black Bolt at the prison, and just barely losing him to Declan’s escape helicopter. It’s no surprise that Medusa and Karnak are struggling the most as Inhumans on Earth at this point, since these two characters are the most blatantly nerfed, leaving them very little to do. Karnak is simply left to stay at the pot farm because he suddenly thinks he’s useless, while Medusa gets to inexplicably yell at an ATM for money, despite the fact that the Inhuman Royal Family has apparently been watching Earth for a while, and knows what cars are, so they should definitely know what money is, and how ATM’s work. Like I said, some of this show’s writing is really problematic, especially when it tries to force ‘humour’ that is more simply stupid than it is funny.

“Divide and Conquer” still isn’t doing enough to elevate Inhumans beyond barely passable territory, but at least some characters are starting to find more interesting scenarios to be in, even if not all of them make perfect sense. Crystal and Lockjaw being on Earth hopefully gives them more to do beyond being prisoners of Maximus, while Black Bolt finding an Inhuman researcher should hopefully lead to some heightened story momentum, as well as hopefully some more effective nods to Agents of S.H.I.E.L.D. Even Gorgon’s head-scratching military escort at least carries some potential for excitement over the next few weeks, but Medusa and Karnak are really struggling as characters at this point, especially without their powers. Maybe Medusa meeting Louise, that aerospace researcher, will lead to some better storytelling in the coming weeks, but I’m not sure how Karnak being stuck at a marijuana farm is supposed to lead to compelling material. This ‘event series’ still isn’t half over yet, but with every passing week, it’s easier to get more pessimistic about Inhumans. These characters are too good to go down as the Marvel Cinematic Universe’s first serious misstep, so why does this show keep letting them down so spectacularly?

Inhumans Episode 3: "Divide and Conquer" Review
Inhumans finds some slight refinements this week, but its continued problematic writing and under-serviced characters are still dragging the show down far too much.
THE GOOD STUFF
THE NOT-SO-GOOD STUFF
2017-10-09
63%Overall Score
Reader Rating: (0 Votes)
0%