Lucifer settled into a mostly familiar groove this week, bringing another case-of-the-week with Lucifer’s latest personal conflict. “The One with the Baby Carrot” serves as another reliably entertaining episode, though it’s one that also doesn’t really raise the bar for the show in any real way. This is probably expected, coming off of last week’s season premiere, but a largely predictable plot surrounded by a disappointingly unfulfilling case-of-the-week does lead to an episode that feels more simply satisfactory than it does truly great.

Things begin with Lucifer having trouble with his wings involuntarily regenerating, even during sexual conquests. This has him more determined than ever to track down the Sinnerman, the mysterious crime lord that has now appeared in Los Angeles, and the person who seems to be, “Stealing Lucifer’s schtick”, as it’s put. Chloe is dismissive, and Pierce seems to outright mock the idea at first, but Lucifer is determined to get to the bottom of what’s going on, even if the Sinnerman remains very much a hypothetical boogeyman for now. 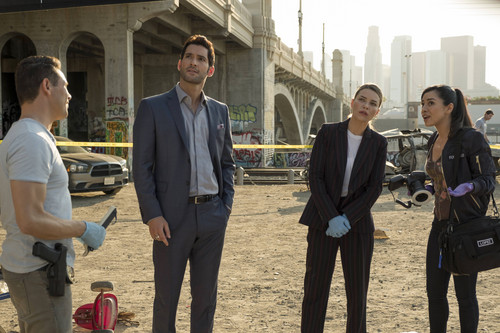 Before we can get into the more interesting turns with Lucifer though, we do have to deal with Los Angeles’ latest murder victim, that being a struggling comedian who was shot to death after declaring on YouTube that he was going to expose a highly successful comedian for stealing his jokes. It’s a fairly decent setup, and Ella coming along for some of the investigation is rewarding as ever, especially when the show really starts pushing a running gag where Ella is a spectacularly poor judge of character when it comes to men that she admires. There’s even some reliably fun humour with Lucifer and Chloe, as usual, particularly when Lucifer inevitably hijacks the investigation on more than one occasion, as he’s wont to do.

Sadly though, even if the setup was good, the progression of the case didn’t feel all that engaging or satisfying this week. The case generally felt very predictable, without much in the way of real twists. Even the final culprit, the warm-up comedian for the red herring suspect, didn’t prove to be that impactful or sensible of a killer. There were also some moments in this case that were just plain head-scratching to boot. There’s one point in particular where Lucifer accidentally injures the red herring suspect on stage with a gun hidden inside a puppet, but not only does he unrealistically get a slap on the wrist for this, despite hundreds of witnesses (including Chloe and Ella!), but it also begs the question of why hiding a gun in an unused puppet, buried a bunch of other puppets, is in any way useful. Yes, the guy was getting death threats, but how is hiding a gun in an unused prop supposed to be efficient or reliable in an attack situation? Moreover, how the hell did Lucifer not detect that there was a gun in the puppet?! 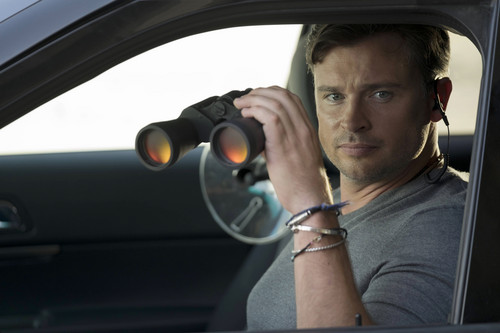 There’s also a lot of other moments in the case that try for humour, but don’t really land. Lucifer himself was great as ever, especially when he has to try and confront the frustration of someone trying to steal his act as the Lord of Darkness, but the rest of the characters didn’t fare as well. There’s one point where Lucifer gets to humiliate Dan during stand-up to try and flush out a suspect, but this never really feels like it makes sense, especially when Chloe and Dan decide to arrest the first person that praises Lucifer for his heckling. I don’t think that’s probable cause, detectives. This also follows a really bizarre series of jokes about micropenises, which feel largely beneath Lucifer’s usual sharp wit. Maybe the joke is that the show is resorting to tacky, low-hanging fruits like this, but even if that’s the case, it doesn’t really fit with Lucifer’s style, and just feels like the writers couldn’t come up with any truly effective jokes for this episode, an episode that’s ironically about comedians no less.

Fortunately, there was a subplot with Linda and Amenadiel that turned out a lot better, and actually offered some solid character moments for both of them. Amenadiel is struggling with the idea of having to dispose of Lucifer’s wings, and on a related note, the show did acknowledge two of the criticized elements from the season premiere last week, namely that Lucifer is an idiot for leaving his severed wings lying around for anyone to find, and that the wings can be easily disposed of by burning them. This friendship between Amenadiel and Linda has seen its share of bumps, but it’s nice to see them continuing to find ways to rely on each other during moments like this. The show continues to do a good job of spotlighting Linda as the one ordinary human that is fully aware of Lucifer’s and Amenadiel’s divinity, and this helps to create an extra relatable dimension to things that are otherwise very fantastical, like a disgraced angel pining for his lost wings. 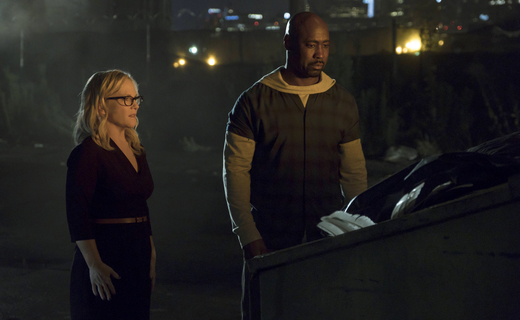 There’s also another pretty great moment at Lucifer’s apartment, whereupon Pierce pays him a visit at night, and warns him not to talk about the Sinnerman around the precinct. It turns out that Pierce has a long history with the Sinnerman, with the Sinnerman even killing some mysterious person that Pierce was close with back in Chicago, directly motivating Pierce moving to Los Angeles. Considering that Pierce is keeping extensive tabs on Lucifer, the obvious speculation here is that Pierce himself is actually the Sinnerman, and is manipulating Lucifer toward some unknown end. I feel like that’s too easy however, and I hope that there’s more to this story arc than Pierce being the Sinnerman and hiding in plain sight at the LAPD. Whatever the case, Pierce’s interactions with Lucifer have been pretty rewarding so far, and the tiny, begrudging respect that Pierce seems to be developing for Lucifer is definitely proving to be fun to watch.

“The One with the Baby Carrot” certainly isn’t the strongest episode of Lucifer, and feels like a pretty obvious attempt to primarily restore the status quo after last week’s season premiere. I suppose that’s fair enough, even if this did lead to a rather unsatisfying case-of-the-week taking up a huge chunk of the episode. Still, the subplot with Amenadiel and Linda added some solid heart to the episode, and Tom Welling is continuing to exceptionally fit in to this ensemble as Lieutenant Pierce, a mysterious new character that could end up being friend or foe to Lucifer in the long term. With Maze finally set to return to the show in next week’s episode, the return to the show’s usual routine will likely be complete, but as long as we get a better murder case next week, I suppose I’m alright with that. After all, even in the weaker episodes, this show’s exceptional charm and cheeky personality continues to shine every single week!

Lucifer 3.2: "The One with the Baby Carrot" Review
Lucifer largely settled into its familiar groove this week, balancing some solid subplots with a disappointingly uneventful case-of-the-week.
THE GOOD STUFF
THE NOT-SO-GOOD STUFF
2017-10-10
78%Overall Score
Reader Rating: (0 Votes)
0%